DMAE Complex is a nutritional supplement advertised as an effective and economical formula for a proper mental nutrition and the necessary neurotransmitter support.

This product is manufactured and delivered by Swanson Health Products, a reputable company in the nutritional field industry since 1969. The company owns of a facility of 120,000 sq. feet which centralizes their manufacturing, storage, shipping, marketing and call center units under a single roof.

DMAE Complex is a combination of the organic compound DMAE with the synergistic nutrition of vitamins B5 and B6. According to the manufacturer, the formula has the capacity to easily cross the blood-brain barrier thus to reach brain cells fast and effectively reach its goal.

The manufacturer makes no statements regarding the targeted segment and makes no reference to any clinical trial involving the formula.

DMAE is commonly used to treat brain and central nervous system related disorders such as: ADHD, symptoms associated with Alzheimer’s disease, depression, symptoms associate with autism and Huntington’s chorea. It is considered a very safe supplement and can cause only a few mild side effects. DMAE has been extensively researched and has been linked to the production of acetylcholine, an important brain neurotransmitter.

Vitamins B5 and B6 support the transformation of food into energy and are involved in protein metabolism. Amongst other benefits, vitamin B5 is helps the body to synthesize acetylcholine, an essential neurotransmitter involved in the development of learning and memory capabilities.

DMAE Complex suggested use is of 1 capsule 1-2 times per day with water. The formula is not recommended for pregnant and nursing women. People suffering from medical conditions such as schizophrenia, depression or epilepsy should not take this supplement without the healthcare professional’s consent.

3) Is DMAE Complex Right for You?

Swanson Premium DMAE complex is a product composed of DMAE in combination with vitamins B-6 and B-6. Evidence has shown that DMAE is a man-made liquid or pill with similarities to choline. Choline is grouped within the B-vitamin category, though not officially considered a vitamin on its right. It has several key functions, including protection of the liver from accumulating fat and function as a precursor molecule for a neurotransmitter called acetylcholine. Several studies have shown that choline may be able to aid in preventing memory loss due to aging.

Thus, DMAE is used to improve learning, elevate mood and help increase intelligence. Also, it is being researched a great deal for the treatment of Alzheimer’s disease and other age-related brain disorders, although evidence is still inconclusive. While DMAE is mostly commonly thought of for its cognitive-enhancing effects, it may prove to be quite valuable for its potential “brain-stimulant” effects. That means DMAE supplementation should be considered by people who want to enhance focus before a workout or increase alertness throughout the day.

A study made in 1979 by the Institute of Child Behavior in San Diego revealed that the best-received form of DMAE was in combination with vitamin B-6. There are some reported side effects related to the usage of DMAE, including headaches, insomnia and muscle tension.

There are some online testimonials about Swanson Premium DMAE. What is being reported includes:

Swanson Premium DMAE Complex can be found for purchase on manufacturer website as well as some other online retailers. Sold by bottles containing 100 capsules, it is an affordably priced product, especially in comparison with other similar remedies.

7) How to Take DMAE Complex

No evidence of clinical trial is provided by the manufacturer, but the consumers’ reviews support its effectiveness.

Swanson Health Products’ formula is advertised as an effective neuronal and cognitive support. DMAE Complex has to be used with precautions by people already suffering from medical conditions. The combination of DMAE and vitamins is not clinically tested, or in any case, no evidence of such trials could be found. However, the benefits of DMAE, vitamin B5 and B6 have been researched and demonstrated through various clinical trials.

Still, it should be noted that consumers have reported sharper thinking, improved learning and concentrating abilities and better aspect of skin after using the formula.

In conclusion, DMAE Complex is an efficient formula according to consumer opinions, but is not a scientifically based formula and a specialized advice is recommended prior to beginning treatment. 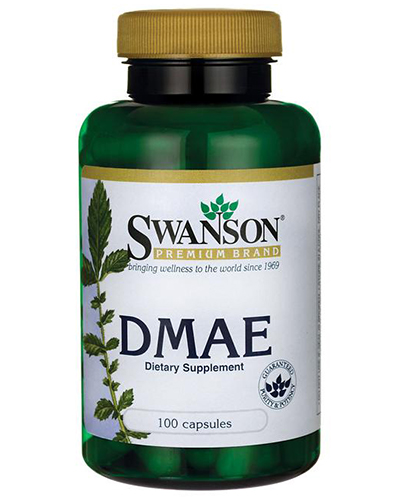 clear
Q:
What are the core ingredients in DMAE Complex?
A:

Q:
What is DMAE Complex supplement?
A:

Swanson Premium DMAE Complex is claimed to be a supplement that provides an economical mental nutrition. The producer of this formula is Swanson Health Products and is situated in North Dakota, United States. Swanson Premium DMAE Complex uses ingredients such as vitamin B6 or Dimethylaminoethanol in order to act as a support for neurotransmitters, and sustain people that need nutritional supplement for brain health.

Q:
Are DMAE Complex benefits actually a reality?
A:

Like other DMAE based supplements, Swanson Premium DMAE Complex claims to improve the sharpness of mind by increasing DMAE levels in the body. It is composed by DMAE in combination with Vitamin B-5 and B-6. This remedy is recommended for people with memory loss problems, especially elders, as well as people who want to enhance their focus and improve their cognitive functions. There are some side effects to its usage, and if any occurs, the consumption should be immediately stopped. For better results, people taking it should combine it with a healthy diet.

I have been using this formula for seven weeks and it seems to work.