Omega-3 Fish Oil is a nutritional formula based on the highly popular Omega-3 fatty acids EPA and DHA. The supplement is produced by an American company called Brain Power Plus that claims to have been created from the desire to provide high quality, reliable, and affordable solutions for those who seek to improve their health through the use of dietary supplements. At this time, the producer commercializes only 3 products but states they are obtained in FDA approved facilities following the highest GMP standards.

Omega-3 Fish Oil’s advertised benefits include: support of the joints, heart, brain, and immune system. The formula is said to lack heavy contaminants like Mercury due to the carefully selected source of fish oil (low chain fish) and the special purification process (molecular distillation) which makes sure that even the smallest amounts of contaminants are eliminated before encapsulation.

Unfortunately, there’s not a lot of information about the risks and side effects involved, and the manufacturer doesn’t even provide the complete list of active ingredients, which is a quite big disadvantage in our opinion. This type of information is essential for any type of product and we are very disappointed it completely lacks from the official site.

As we can see, there are only two active substances included in the formula, namely EPA and DHA. The third mentioned ingredient is generically called other Omega-3 fatty acids’, without any further detail to which of the other remaining fatty acids the producer refers to.

EPA and DHA are animal based fatty acids, substances that have been intensively researched in the past decades and were linked to the healing and prevention of numerous health affections. The chemicals are generally associated with promoting healthy brain abilities (alertness, attention span, memory) and DHA is actually considered crucial for the normal development of the fetus’s brain and the Central Nervous System starting from the mother’s wound. Pregnant women are also advised to consume fish or fish based supplements (preferably cooked not raw) that will ensure optimal amounts of Omega-3 fatty acids, and particularly DHA. EPA is also required for the maintenance of optimal brain function, to support emotional balance, and promote a healthy circulatory system.

2) What Are Omega-3 Fish Oil Ingredients?

Omega-3’s are some of the most popular natural remedies used on a large scale in the nutritional supplements industry. The polyunsaturated fatty acids (PUFAs) have been intensively researched and shown to be essential for maintaining optimal health in humans. There are three Omega-3 fatty acids known to influence our health, namely ALA (present in vegetal sources like algae, seeds, or plant oils), EPA, and DHA (both are found in marine oils).

EPA and DHA are considered to best work together, but they also have individual benefits that distinguish them from one another. For example EPA has been shown to be particularly beneficial for the circulatory system, and as well for supporting brain function in the later stages of life. Emotional balance can also be restored and maintained through proper supplementation with EPA. DHA is considered an essential nutrient for the normal development of fetuses’ brain, the Central Nervous System (CNS), and vision (formation of the retina). Pregnant women are advised to eat as much foods that contain this nutrient, but stay on the safe side in order to avoid the low quality sources which might be contaminated with heavy metals.

DHA is required in the early stages of life in large quantities, which is why children also need to have a balanced diet able to provide all the necessary DHA amounts for a lean development.

Regarding the recommended intakes of EPA and DHA, there are some guidelines that set a value around 0.3-0.5 grams per day. However, people who suffer from chronic illnesses should consume much higher amounts that vary with the disease. Omega-3 Fish Oil provides a relatively high amount of Omega-3’s, which is a very good thing when talking about the potency of a supplement.

The formula is currently on sale on the official page of the manufacturer and can be purchased for $24.97. The standard price is much higher ($77.97), making the discount even more appealing. The suggested dose is 2 softgels daily, so one bottle containing 180 softgels provides the necessary amount for three months. There is no indication of a money-back guarantee.

Both fatty acids were clinically shown to prevent age-related memory degeneration (including Alzheimer’s disease or Parkinson’s disease), reduce ADHD and arthritis symptoms, prevent cancer (colon, prostate, or breast cancer), prevent inflammation of blood vessels that causes cardiovascular disease, and many others. Studies results are promising in many of these areas and the benefits of proper supplementation with fish oil based products are at this point incontestable.

Omega-3 Fish Oil appears to be a high-quality formula that delivers potent amounts of Omega-3s. The product is also advertised as free of heavy metal contaminants, an important detail when it comes to fish oil supplements. Although there’s no evidence of a clinical trial involving this particular formula, consumer testimonials are favorable. The number of testimonials is also relatively high, so it looks like the product is an effective solution.

Another important thing when it comes to fish oil supplements is the amount of EPA and DHA provided, and this product supplies large quantities of both nutrients. While some supplements only provide 100-200 mg of each Omega 3, this formula supplies 800 mg of EPA and 600 mg of DHA per softgel. 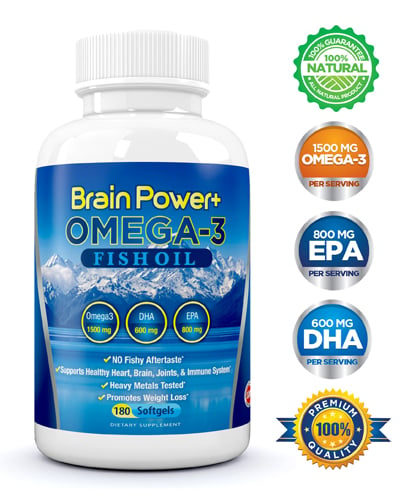 clear
Q:
What does Omega-3 Fish Oil contain?
A:

Omega-3 Fish Oil is an over the counter medication advertised as suitable for those who want an optimal support for maintaining a healthy brain, joints, heart, and immune system. The formula is produced in USA, in FDA certified facilities by the company Brain Power Plus. At this time, this manufacturer is not very experienced and commercializes only three supplements. This particular formula is advertised as free of heavy contaminants (such as Mercury) substances which are known to be present in fish meat as result of living in polluted environments.

Given the relatively large amount of EPA and DHA provided by a single softgel of Omega-3 Fish Oil, it appears this is a high potency formula. Also, it is very important to keep in mind that the manufacturer tests its products at 3rd party laboratories and puts a great accent on removing any heavy metal traces from the product, something many Omega-3 suppliers cannot take pride in.

The number of testimonials coming from those who have already tried the formula is relatively high, and it looks like many of them are satisfied with the results. Those who have declared themselves unsatisfied usually complain about the large size or the fishy aftertaste which, in our opinion are not major disadvantages as long as the product is effective.