NutraSea HP Review – 8 Things You May Not Know

Ascenta is a Canadian company which manufactures a range of Omega-3 and vitamins based formulations, designed for adults and children. The company also manufactures a few pet health products (Canine Omega and Feline Omega). The company’s product range includes 8 products, including the 2 products especially designed for animals. All company products are third party tested by at least one independent laboratory.

NutraSea HP contains high concentrations of EPA (a 3:1 ratio EPA to DHA) and is recommended for adults over the age of 19 who live active and stressful lifestyles, suffer from inflammatory conditions or are looking for enhanced focus and mood.

NutraSea HP contains EPA and DHA Omega-3 fatty acids in a ratio of 3:1, a ratio which is supported by most current medical research. The manufacturer claims the formula is produced from wild fish of the herring family, which are generally higher in Omega-3s and do not contain the levels of environmental contaminants found in farmed fish.

Scientists generally agree that Omega-3 EPA and DHA daily intakes should amount to 2-5 grams. EPA and DHA are essential fatty acids, which are not produced by the body but should be obtained from foods. They are found mostly in fish (salmon, tuna, herring, etc.) and certain types of algae. Whereas DHA seems to be essential to pre-and postnatal brain development, EPA is more influential on behavior and mood. In fact, several studies have shown EPA to be able to reduce depression and to benefit borderline personality disorder, although an exact mechanism of action is yet to be established.

Research has shown benefits on many aspects of health: they help reduce cholesterol and triglyceride levels and can help lower high blood pressure, two major contributors to heart disease. A study conducted several years ago even concludes that 5 servings of salmon per week help reduce risk of developing prostate cancer in men by roughly 60%.
Another clinical study on nearly 100 boys revealed that those with lower levels of Omega-3 fatty acids had more learning and behavioral problems; hence they may be beneficial in ADD and ADHD conditions.

This formula is a dietary supplement that blends Omega-3 fatty acids with vitamins and herbs that provide the body with essential nutrients that support health and well-being. Omega-3 fatty acids are found in the fatty layers of cold water fish and shellfish, plants and nut oil. There are two forms: EPA and DHA, or eicosapentaenoic acid and docosahexaenoic acid. DHA is used as a dietary supplement for babies that were born premature and promoted mental development. Among the most common uses of this substance, we can find the treatment of type two diabetes, dementia or attention deficit-hyperactivity disorder. This acid also shows promise when dealing with heart disease, lung disease, or high blood pressure.

EPA also sustain brain health and development by aiming to treat depression, Alzheimer’s disease, or schizophrenia. Other uses include the prevention of heart disease, kidney disease, high cholesterol, or psoriasis. Another ingredient found in this formula is Vitamin C, a vitamin that can be found in fresh fruits and vegetables. Treating the common cold is probably the most often use for this vitamin, tuberculosis depression, thinking problems, and dementia is other problems that vitamin C addresses.

There are online testimonials about NutraSea Hp. What is being said includes the following:

This formula has a somewhat high price and can be bought in several forms, in the form of liquid bottles of 200 and 500 milliliters that come in different flavors or in the form of containers that hold 60 or 120 solfege capsules. The recommended dosage is two capsules per day with a meal or one teaspoon per day. This supplement can be purchased in all its forms directly from the manufacturer’s website and free shipping is available for orders that exceed a certain amount. There are no free trials or money-back guarantees associated with this formula.

The manufacturer claims NutraSea HP has no side effects. This is a liquid formulation and the manufacturer recommends taking 1 tablespoon (5 ml) per day.

Based on an Omega-3 EPA and DHA mixture NutraSea HP promotes a number of benefits on the general health, including on the circulatory system, mood, immune system and joints. The ratio of 3:1 concentration EPA to DHA is apparently one that is usually used by clinical tests. The product is claimed to be purity tested and to be free of fishy taste due to a special anti-oxidant blend. Consumer reviews confirm the formula’s increased effectiveness and great quality.

NutraSea HP is also suited for pregnant and nursing women, making it a wise choice for a wide range of consumers. However, for cautionary reasons, we recommend that you talk to a healthcare provider prior to deciding if this is the right formula for your needs. 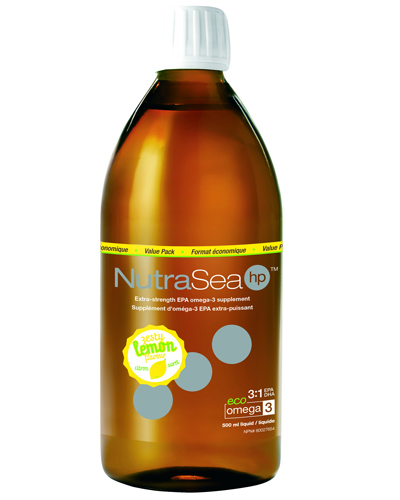 clear
Q:
What are the core ingredients in NutraSea HP?
A:

Q:
What is NutraSea HP supplement?
A:

NutraSea Hp is advertised as a dietary supplement that is based on fish oil with high levels of Omega-3 fatty acids and supports several aspects of health. The manufacturing company is called Ascenta and is based in Canada. This formula mixes together EPA and DHA with a number of vitamins and herbs, as to provide the body with essential nutrients that aim to maintain a state of well being; learning and memory disorders, heart disease, or high cholesterol are avoided with this product.

Q:
Does NutraSea HP work?
A:

NutraSea Hp presents itself as a dietary supplement that is based on Omega-3 fatty acids and addresses several health issues. The manufacturer's claims are backed up by the fact that the ingredients used in this blend have scientifically proven effects. The price of this formula is quite high, and no free trials are available, as well as no money back guarantees. Customers can choose from different sises and forms, depending on individual need and preferences. Other supplements that are based on the same ingredients and that similar offer effect can be purchased from the online supplement market at this time.

I have been looking for the source of the vitamin D content in the oil, I have not been able to find this info anywhere. I am taking this oil now please help.
Dave

Title for your comment
vitamin D source
Have you tried this product?
Yes
Reply