Although no clear ailment claims are made by the manufacturer, it is generally known that Omega-3 EPA and DHA have been shown to benefit a variety of medical conditions such as joint inflammation, skin health, pain relief, cardiovascular health, gastro-intestinal health, eye health and the support of women’s health. Additionally, fish oil is known to promote optimal joint function and overall brain and nervous system function.

The fish oil is molecularly distilled and is independently verified for purity, particularly to be free of PCB’s, Heavy Metals and Pesticides. The product is advertised to contain no wheat, gluten, corn protein, yeast, dairy products, artificial colors, sweeteners or preservatives.

Omega-3 EPA and DHA are essential fatty acids, meaning they are not produced by the body but should be obtained from foods. Research has shown a number of benefits of the two, on many aspects of health. They help reduce cholesterol and triglyceride levels and can help lower high blood pressure. These are major contributors to heart disease, hence Omega-3 is able to lower the risk of heart attacks, stoke or coronary artery disease.

DHA is proven essential to pre-and postnatal brain development, whereas EPA seems more influential on behavior and mood. In fact, studies have shown EPA to reduce depression and to benefit borderline personality disorder, bipolar disorder and even schizophrenia, although an exact mechanism of action is yet to be established. Also, lowered tissue levels of DHA/EPA have been correlated to accelerated cognitive decline and mild cognitive impairment; hence supplementation works to improve cognitive function.

The Omega-3 fatty acids, EPA and DHA, are considered to be essential acids for the optimal brain and body functioning. Apparently, studies have shown that these fatty acids play an important role in brain development and they appear to be important in cognitive and behavioral function.

EPA or Eicosapentaenoic acid is known for the role it plays in the good development of the brain and some studies show that it might be useful in reducing ADHD (Attention-Deficit Hyperactivity Disorder) symptoms. Recent research also found that EPA and not DHA has a positive effect on depression.

DHA or Docosahexaenoic acid might help the brain better withstand when dealing with stress and aging is what an article published in the journal Stroke relates. Apparently, apart from its positive effects, DHA has in Alzheimer Disease patients, it also alters the brain chemistry and structure thus preventing cognitive decline and abnormal brain aging.

Vitamin E is a collective name for a group of compounds possessing antioxidant properties. Recent studies suggest that vitamin E might help prevent or delay the chronic diseases associated with free radicals because of its antioxidant effect that limits free-radical production.

Ultra Omega 600 by Neurobiologix is a somewhat affordable supplement available for purchase on the manufacturer’s website. Other online retailers might offer discounts and promotions. The product is available in bottles containing 60 capsules, designed to last 1-2 months if the recommended daily dosage is not exceeded.

The manufacturer recommends taking one or two soft gels one to two times daily. No side effects are reported for Ultrapure Omega 600; however the manufacturer issues some precautions and potential drug interactions warnings. These refer to pregnant or nursing women, people taking prescription medication (including blood thinners) and people about to have surgery.

8) Our Final Take On Ultrapure Omega 600

Ultrapure Omega 600 is a highly concentrated Omega-3 supplement, which features EPA and DHA as core ingredients. The marketed benefits are based on the positive effects EPA and DHA have been demonstrated to possess: brain function, joint health, eye health and cardiovascular problems. The fish oil (source of the Omega-3) is tested for purity and is claimed free of toxins or pesticides.

The product is hence very likely to work, although there are no consumer reviews to support the effectiveness claim. However, caution is advised since side effects as well as potential drug interactions are known to be associated with taking Omega-3. 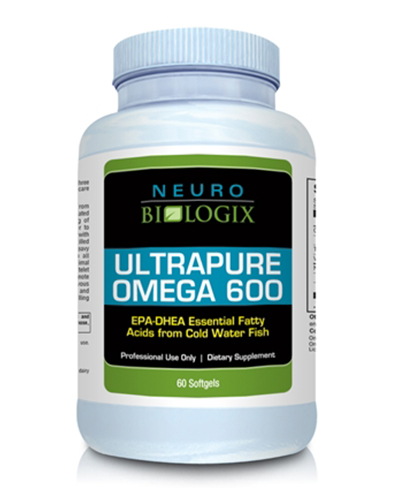 clear
Q:
What does Ultrapure Omega 600 contain?
A:

Q:
What is Ultrapure Omega 600 supplement?
A:

Ultra Omega 600 is a pure, highly concentrated and cholesterol-free fish oil sourced from the cold waters of Norway. Ultra Omega 600 is offered to you by Neurobiologix LLC. This product is recommended for a number of medical conditions such as joint inflammation, skin health, pain relief and cardiovascular health. Ultra Omega 600 is presented in a pleasant smelling, enteric coated softgel that is easy to swallow. Fish oil, the main ingredient of Ultra Omega 600, has also been shown to promote optimal join function and overall brain and nervous system function. Ultra Omega 600 is stabilized with Vitamin E in order to assure maximum freshness.

Q:
Are Ultrapure Omega 600 benefits actually a reality?
A:

As most omega-3 based supplements, Ultra Omega 600 is mostly based on the positive effects EPA and DHA have been demonstrated to possess. Although research has found that these two fatty acids are effective in cardiovascular problems and brain related issues, not enough information has been made available to guarantee Ultra Omega 600's efficacy. However, most individuals consuming supplements containing EPA and DHA seemed pleased with the results they encountered after usage.

I had a skin condition and after some failed attempts with other products Ultra Omega 600 proved to be the right one for me. I help it will work for for you too.