0 User Comments
Evidence Based This BrainReference content is medically reviewed or fact checked to ensure factually accurate information. Click for more info. | Ingredients | Price | Does it Work | Alternatives to Aricept

Aricept is a medication that has been promoted to help slow down the progression of mild, moderate, and severe Alzheimer’s disease. This drug is manufactured by Pfizer, one of the larger drug producers in the world.

The company was founded in 1849 and claims that their “purpose is helping people live longer, healthier, happier lives.” The company produces a wide range of drugs, some of which have similar purported functions.

According to the manufacturer’s website, this drug should be used during the first onset of Alzheimer’s disease. It can even prevent it from occurring in the full-blown version. Since this memory diminishing health condition can affect each person differently, it has to be evaluated on a case by case basis.

Aricept is available by prescription only. It is never a good idea to take more of this type of medication than the doctor recommends.

1) Details on Aricept Ingredients and Uses

2) What Does Aricept Do?

Aricept is advertised as a reversible inhibitor of the enzyme acetylcholinesterase, and it contains Donepezil Hydrochloride.

This chemical is meant to create its benefic effects by enhancing cognitive function. However, specialists are still unaware of how this substance exerts its mechanics in the brain.

This is the only medication thus far that has been approved by the United States Food and Drug Administration as a treatment for mild, moderate, and severe Alzheimer’s disease.

While there is no cure for the illness itself, Aricept is believed to be a means of controlling it or slow the progression of the disease from one stage to the next.

Unfortunately, some users may experience side effects because of the ingestion of this drug. The most common side effects of Aricept include muscle cramps, vomiting, anorexia, fatigue, hypertension, deep vein thrombosis, and increased thirst.

While there have been quite a few studies about Aricept’s use, everyone responds to it in different ways.

As a result, some patients may show improvements upon taking this drug, while others may show no changes at all.

Typically a low dose of it–about 5 or 10 mg–will be given per day to see how a person reacts to the drug. The amount can be increased as needed.

The maximum dose recommended is 23 mg per day.

Since it has been approved by the US Food and Drug Association, it has also been adopted by both medication coverage programs out there. Anyone prescribed this drug will have to see what the coverage consists of. There may be a deductible or co-pay amount that applies.

4) Bottom Line – Does It Really Work?

In the end, patients who want to use this drug must speak to a physician since Aricept is available by prescription only. Unfortunately, the price for this drug may vary a lot from one retailer to another.

This is the only medication thus far that has been approved by the United States Food and Drug Administration as a treatment for different stages of Alzheimer’s disease.

Aricept has shown some positive results on patients and maybe a good treatment for those who suffer from this terrible disease. 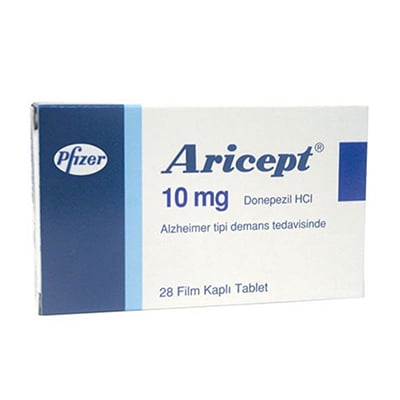