Unlike most probiotics on the market, which are either bacterial or yogurt-based, Florastor’s main active ingredient is Saccharomyces boulardii lyo, a tropical yeast found on the skin of lychees and mangosteens.

Florastor claims to be the number 1 probiotic recommended by doctors and pharmacists in 100 countries. The manufacturer is the French pharmaceutical company Biocodex which has been on the European market for more than 60 years and in the USA for almost 10 years.

Florastor is the the only product commercialized by Biocodex and is also available in a kids formula with tutti-frutti flavor. The product is available in more than 100 countries around the globe, but the main sellers in USA are Rite Air, Costco, Walmart, CVS, Walgreens and Amazon.com.

The company provides neither testimonials or a free trial, but many positive customer reviews are available on the online retailer websites.

1) Florastor at a Glance

Florastor is a daily probiotic which claims to improve digestion and whole-body health. Though suitable for anyone 2 months of age and older, it is particularly recommended to people suffering from Crohn’s Disease, Inflammatory Bowel Disease, E.coli and Salmonella infections and during treatment with antibiotics, to restore the gut flora.

The main active ingredient in Florastor, Saccharomyces boulardii lyo, is a friendly yeast found naturally on the skin of lychees and mangosteens in Indochina. It has made the subject of numerous extensive studies (published in major scientific journals such as JAMA and The American Journal of Gastroenterology) and proven to inhibit the growth of E.coli and Salmonella, because these harmful bacteria tend to adhere to the surface of the yeast rather than adhering to the surfaces along the intestinal lumen. The yeast in Florastor acts as a temporary flora and destroys pathogenic bacteria, relieving digestive issues such as bloating, gas, diarrhea, clostridium dificile infections, and other gastrointestinal problems.

Probiotics naturally occur in some foods like milk, yogurt, and soy beverages and they are also widely available as dietary supplements. However, as opposed to yogurt and other bacterial probiotics, Florastor is not destroyed by antibiotics that target and kill bacteria (both the good and the bad ones) and can help restore the balance of the gut microflora. Several studies have shown that taking Florastor can reduce the incidence of antibiotic related diarrhea.

Biocodex uses a patented dehydration process called lyophilization, which maintains and protects the healing properties of Saccharomyces boulardii lyo without refrigeration. This makes it a perfect choice for people with active lifestyles and those who travel frequently.

Florastor is an all-natural vegetarian and gluten-free supplement. It contains no corn, meat, egg protein, milk protein, nuts, fish, gluten, shellfish or latex, but it may contain traces of soy. The very low quantity of lactose (33 mg) allows it to be generally tolerated by people with lactose intolerance and the manufacturer even claims that Florastor increases lactase production, which helps with lactose digestion. The ingredients contained in this formula and their quantities are clearly listed on the product label.

The recommended dose is 2 capsules per day, one in the morning and one in the evening, which can be taken in several ways. You can swallow the capsule whole, open it and swallow just the powder and follow it with liquid, sprinkle Florastor over semisolid food (apple sauce, yogurt, etc) or dissolve the contents of the capsule in liquid (water, juice, milk or other noncarbonated drinks). Biocodex cautions against mixing Florastor in any carbonated, very hot, or alcohol-containing beverages or foods. Within 30 minutes of ingestion, the capsule dissolves in the stomach, allowing the yeast cells to line the intestinal tract. Florastor can only benefit intestinal health during days of administration. This probiotic is naturally eliminated through the digestive tract and becomes undetectable within five days after administration is stopped.

Florastor side effects are extremely rare, with less than 1% of users reporting mild constipation or thirst and in most cases, these symptoms go away in a few days. However, pregnant or nursing women are advised to check with their healthcare provider before using Florastor. It is contraindicated in patients with a central line and people with a known hypersensitivity to any of the components, especially those with lactose and yeast allergies.

3) What Does Florastor Do?

The effectiveness of the supplement itself is not scientifically demonstrated. However, numerous studies involving its main active ingredient have been conducted throughout the years. These studies indicate the therapeutic effects of Saccharomyces boulardii in preventing and treating gastrointestinal conditions, making it a very popular treatment for diarrhea diseases that are caused by bacteria.
The mechanisms of action attributed to this live yeast refer to its ability to regulate the microbial levels in the intestines, reduce the multiplication of pathogens and infection of the mucous, modulate immune responses, and induce enzymatic activity, easing absorption and proper nutrition.

However, specialists warn against low-quality sources of Saccharomyces boulardii that are not as effective due to improper doses or instability of the probiotic. Lyophilized products have the advantage of portability and stability over longer periods of time, as opposed to het-dried preparations. Unfortunately, there is no standardized dosage that specialists can recommend, and the wide variety of the dosages and forms of Saccharomyces boulardii used during the existing clinical trials makes it hard to reach a conclusion regarding an optimal dose.

This being said we can conclude that given the existing evidence, Florastor may be an effective treatment for different types of diarrhea, may help reduce the risk of diarrhea in patients taking treatments for H. pylori condition. Investigation of its numerous other uses are still in their beginning phases. Florastor should also be a natural adjuvant for the maintenance of optimal immune and digestive function in already healthy individuals.

People with already low immune function should avoid using probiotics based on Saccharomyces boulardii due to an increased risk of developing fungal infections that spread out in the bloodstream.

5) Precautions of Florastor Use

Florastor can be ordered online from a number of partners. The complete list can be consulted by accessing the official site of the product under the section “Order Online”. The product comes in 20 or 50 capsules boxes. At a recommended dose of 1 capsule per day, the total cost for a month supply can be considered moderately low. For example, a 50 capsule box costs around $50, which means that for a month’s supply you will pay approximately $30, taxes not included.

Florastor isn’t subject to a return policy and has no free trial available.

Florastor is marketed as an all-natural probiotic supplement designed to maintain the balance of intestinal flora and promote whole-body health. It is produced in state-of-the-art manufacturing facilities with a patented lyophilization process which guarantees a 3-year shelf life and makes it a perfect choice for travelers.

The main ingredient in Florastor, Saccharomyces boulardii lyo, has been extensively researched and proven to aid in fighting the overgrowth of pathogens, increase the body’s immune system and also naturally increase the body’s production of digestive enzymes, which aid in digestion and nutrient absorption.

Florastor is considered to be beneficial and generally safe for everyone two months of age and older and side effects are mild and extremely rare. Even so, you should consult a pediatrician regarding the correct dose and frequency before administering it to children.

The fact that the manufacturing company has been on the market for over 60 years, the worldwide availability of this supplement and the significant number of positive reviews lead us to believe that Florastor is a highly effective probiotic which lives up to many of its claims. However, as with any dietary supplement, be sure to consult your healthcare professional before administration and in case of long-term use. 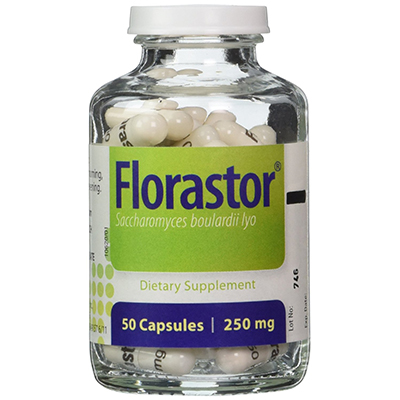 Customers Questions and Answers with Florastor

clear
Q:
What are the active ingrediens in Florastor?
A:

Q:
What is Florastor?
A:

The formula was developed by sold by Biocodex USA. Florastor contains Saccharomyces boulardii, a type of bacteria popular for its benefits on the digestive system. It is commonly used to treat different types of diarrhea, irritable bowel syndrome, and other non-related to digestion conditions (high cholesterol, lactose intolerance, vaginal yeast infections).

Florastor is based on a patented process called lyophilization which has been proven to increase the bioavailability and stability of a rather unstable class of supplements. Bacteria included in most probiotics may not be resistant to gastric juice known to usually affect the integrity of probiotics. Thus, the healthy bacteria fail to reach the gut where it would actually be needed. Other low quality probiotics may be affected by improper shelving conditions.

Florastor is one of the numerous probiotics prescribed for digestive health today. This type of supplements has become more popular in recent years, and is considered generally safe category of nutraceuticals. Florastor is produced by a company activating in the field for over 50 years, something that should not be overlooked by potential buyers. This means that the product should be a safe and effective formula. The official site names this product the #1 probiotic worldwide, although there’s no indication of where this ranking was made (or which the competitors are).

Still, the main ingredient is a clinically researched substance used for tens of years as a treatment of digestive problems, and is currently investigated as a treatment for a larger numbers of health complaints.

We believe Florastor is in fact a safe formula for generally healthy individuals. Anyone with known health issues or under another treatment is advised to first consult with their doctor and only after a prior agreement to start taking Florastor.

Prevented me from getting a third relapse of c. diff.

Title for your comment
Staved off c. diff. relapse
Have you tried this product?
Yes
Reply
Susan K

I had diarrhea for over a year. My gastroenterologist prescribed medication after medication— this is the only thing that stopped it!

Title for your comment
Stopped Diarrhea
Have you tried this product?
Yes
Reply
Debbie S.

I have taken Florastor daily for almost 9 years now. Came down with a terrible C-diff infection after being on antibiotics & after researchimg Florastor, I am convinced it has helped me maintain my gut health & more! Superior support for sure! 👍👍

Title for your comment
Superior support!
Have you tried this product?
Yes
Reply
Donna Carlene Johnson
Reply to  Debbie S.

I love Florastor. It does everything it claims. I have noticed a drastic reduction in gas and bloating. When I stopped for a few weeks, one time, the bloating and gas came back! So, I know for sure it works! Highly recommend!