Concerta Review – Is it Effective?

Concerta is the brand name of a generic medication. The generic form of Concerta is Methylphenidate.

Concerta (Methylphenidate) is a central nervous system stimulant.[3] It impacts chemicals in the nerves and brain that contribute to hyperactivity and impulse control.

Concerta carries a black box warning issued by the FDA. Its label says to use the drug with caution in people who have a history of alcoholism or drug dependence as it can lead to abuse or addiction and habit-forming.[4]

2) How Did Janssen Pharmaceutica Start?

Concerta is made by Janssen Pharmaceutica, a pharmaceutical company headquartered in Beerse, Belgium. Janssen Pharmaceutica was founded in 1953 by Paul Janssen. In 1961, the company was purchased by New Jersey-based U.S. corporation Johnson & Johnson and renamed Janssen Research and Development (JRD).

Methylphenidate is a central nervous system stimulant and a controlled substance [5], which means your doctor will have to control its use thoroughly. It is regularly prescribed in the treatment of attention deficit disorder (ADD), attention deficit hyperactivity disorder (ADHD), narcolepsy, major depressive disorder, and bipolar disorder.[6][7]

Long-acting stimulants like lisdexamfetamine and dextroamphetamine are generally recognized as the most effective and widely used treatment for ADHD.[9][10] They are considered first-line options for children, adolescents, and adults.

Some clinical researches imply that since ADD/ADHD diagnosis is rising significantly around the world, taking Methylphenidate may cause more harm than good in individuals using Concerta as a “study drug.” [11] This applies to individuals who possibly may be experiencing a different issue and are misdiagnosed with ADD/ADHD.

Methylphenidate may also be prescribed for off-label use in treatment-resistant cases of major depressive disorder and bipolar disorder.[13] It can also improve depression in several groups, including cancer, stroke, and HIV-positive patients.[14]

However, the use of stimulants, such as Methylphenidate in cases of treatment-resistant depression is controversial.[15]

Some Concerta (Methylphenidate) claimed benefits include:

6) Potential Side Effects from Concerta Ingredients

More serious adverse effects may include:

While one of the most popular ADD/ADHD prescription drugs out there, Concerta isn’t right for everyone. Furthermore, many health conditions and prescriptions may change the way the medications work. Patients taking MAOI antidepressants (linezolid, methylene blue, isocarboxazid, moclobemide, procarbazine, phenelzine, rasagiline, safinamide, tranylcypromine, selegiline) should avoid taking Concerta (Methylphenidate).[20][21]

Taking MAO inhibitors with this medication may cause a serious (possibly fatal) drug interaction.

Concerta is a pregnancy category C drug. This means that some animal studies have shown harm to a pregnancy, but Methylphenidate hasn’t been studied enough in humans to know if they’re harmful to human pregnancy.

Concerta (Methylphenidate) is a prescription drug, which means it can’t, and it shouldn’t be bought from questionable online or offline sources. It is available, however, at most drugstores.

The price for Concerta oral tablet, extended-release (18 mg/24 hr), is around $1,250 for a supply of 100 tablets, depending on the drugstore you visit. Costs are for cash paying clients only and are not valid with coverage plans.

10) What Are Concerta Alternatives?

Because Concerta (Methylphenidate) is a prescription drug, we can only review prescription medicines as potential alternatives. We don’t advocate substituting a treatment directed by your medical doctor with an over-the-counter dietary supplement.

Similarly to Concerta, Ritalin (Methylphenidate) is another stimulant prescription drug belonging to the class of medications called central nervous system stimulants (CNS stimulants).[22][23] The formula works by modifying the brain’s norepinephrine and dopamine levels, which are neurotransmitters that allow signals to travel from one nerve cell to another.

Vyvanse (Lisdexamfetamine) it’s an amphetamine chemical compound.[24] Like Methylphenidate, lisdexamfetamine also alters brain chemicals. However, it targets both norepinephrine and dopamine. It’s speculated that this prescription medicine increases dopamine levels in the brain and improves the rate at which norepinephrine is released. As a result, more of these chemicals are available to stimulate the brain, which helps increase focus and attention.

You may also try other ADD/ADHD supplements like Synaptol.

Take one Concerta tablet orally once daily in the morning with or without food.

The recommended starting dosage of Concerta for patients who are not currently taking Methylphenidate or stimulants other than Methylphenidate is 18 mg once per day for children and adolescents and 18 or 36 mg/day for adults.

Concerta Extended-Release is available in the following strengths:[25]

"I've been on this medication for about 14 YEARS now. And I love it but hate it. It's considered an abusable drug soon, so getting and filling this prescription is insane. " [Read full review]

"My nine-year-old son has struggled for years, in school, and at home: impulsive behavior, anger, inappropriateness. I always fear the worst and avoided medication for two years." [Read full review]

"I've severe ADHD diagnosed at 39 took a year before I was put on Elvanse (lisdexamfetamine in the UK) currently 70mg. The only problem it wears off after 4 hours can take manic impulsive spending or stealing stupid stuff." [Read full review]

"I started taking Concerta when I was around five due to my severe ADHD, which would cause me to get into trouble a lot at school and not pay attention to it. " [Read full review]

"I started Concerta in August after Vyvance gave me harmful side effects. I began at 36mg, and now I take 54mg. Being on this has helped me with classwork and anxiety- I no longer have anxiety spirals like before!" [Read full review]

However, some patients may respond better to one medicine than the other. It’s important to share your full health history with your physician. Tell him about all multivitamins, herbal supplements, nootropics, amino acids, medications, or other dietary supplements you take. This will help your physician prescribe the right drug for you. 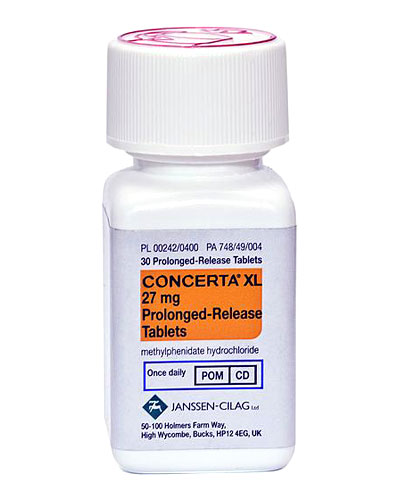 clear
Q:
What are the active ingredients in Concerta?
A:

Q:
Concerta is all about what?
A:

Q:
Are there any side effects to taking Concerta?
A:

Q:
What is the best place to buy Concerta
A:

As a prescription medication, Concerta (Methylphenidate) is available for purchase at most pharmacies.

Q:
What is the cost of Concerta
A:

Q:
How can Concerta help my brain?
A:

Concerta (Methylphenidate) may improve the symptoms of impulsivity and inattention. Concerta is the only ADD/ADHD treatment with the unique OROS delivery system, which delivers extended time-released medication throughout the day.

Concerta is not a brain enhancing dietary supplement, but a prescription medication intended to control chemicals responsible for impulse control and hyperactivity in children, adolescents, and adults.

Q:
Can I take Concerta with a prescription?
A:

Q:
Can I take Concerta with my daily multivitamins?
A:

Please note that many other prescription drugs may affect the way Concerta works. It's imperative to let your physician know about everything you are taking before starting a treatment with this prescription drug. Potential dangerous interactions include any over-the-counter (OTC) medications, herbs, dietary supplements, and illegal drugs.

Q:
Does Concerta have a recommended daily dosage for children?
A:

Concerta can be used in the treatment of ADD/ADHD in children ages 6 to 12, adolescents, and adults.

Q:
Does Concerta contain any potentially dangerous ingredients?
A:

Concerta contains one active ingredient in the form of Methylphenidate. This substance has been linked to many potential side effects, and it should not be taken without prescription. Furthermore, Ritalin has a black box warning issued by the FDA as it can lead to abuse or dependence and can be habit-forming.

Q:
How do I know if Concerta is right for me?
A:

You should not be taking Concerta unless it was prescribed to you by a medical doctor.

Q:
Can pregnant or nursing women take Concerta?
A:

Concerta is a pregnancy category C drug. This means that some animal studies have shown harm to a pregnancy, but Methylphenidate hasn't been studied enough in humans to know if they're harmful to human pregnancy.

Q:
How much Concerta should I take a day?
A:

The most commonly recommended Concerta dose is one tablet orally once daily in the morning with or without food.

Q:
How do I contact Concerta customer service?
A:

You can contact the Janssen Pharmaceutica customer support department by phone at +1-800-526-7736, mail at 2340, Turnhoutseweg 30, 2340 Beerse, Belgium, or by using the contact us form available on their official website janssen.com.

Q:
Does the company accept returns or offer refunds?
A:

As Concerta is a prescription medication, please discuss any possible returns or refunds with the doctor who prescribed it.

Q:
What are the most common complaints about Concerta?
A:

Q:
What people think about Concerta?
A:

User testimonials on Concerta are generally positive. On drugs.com (the leading authority for prescription drugs information), Concerta has an average rating of 7.0 out of 10.

Q:
Who makes Concerta?
A:

Concerta is produced and marketed by Belgium-based company Janssen Pharmaceutica.