Esgic Review – 4 Things You Should Consider

Esgic (better known as Fioricet) is a combined analgesic containing three active ingredients: acetaminophen, butalbital, and caffeine. It is claimed to be an effective form of treatment for primary headaches.

The company behind this product is Novartis, an international pharmaceutical company founded in 1996 through Ciba-Geigy and Sandoz’s merger, two companies with a rich and diverse corporate history. Novartis is now located in Basel, Switzerland.

The manufacturer claims that this non-narcotic combination of ingredients is highly effective in treating tension headaches and migraines that do not respond to other pain relievers.

However, the manufacturer admits that each component’s role in the relief of the complex of symptoms known as a tension headache is incompletely understood.

Esgic or Fioricet is available by prescription only. Many doctors will offer a free sample to see how a patient will react to the medication. Don’t use this drug without absolute necessity.

People with non-disabling headaches don’t require such a potent mixture.

This formula is a mixture of three essential ingredients: butalbital, acetaminophen, and caffeine.

According to the manufacturer, Butalbital is well absorbed from the gastrointestinal tract and is expected to distribute to most body tissues.

Caffeine has been reported to help regulate blood vessels so that headaches can be reduced. Acetaminophen is a prevalent type of pain reliever. It is said to work by decreasing the pain receptors.

It is essential to know that butalbital, acetaminophen, and caffeine tablets are usually prescribed with caution in certain special-risk patients, such as the elderly or debilitated, and those with severe hepatic impairment or renal function.

The manufacturer has conducted some clinical studies and trials to support the effectiveness of Esgic. However, they admit that these studies did not include sufficient numbers of subjects aged 65 and over to determine whether they respond differently from younger subjects.

It is also essential to know that the use of Esgic for headaches has been approved. This doesn’t include other forms of pain, as well. The dose will depend on the nature of the problem, and it has to be closely monitored by a doctor.

There are customer testimonials online about Esgic. What is being reported includes the following:

Esgic is an expensive form of medication. Most health insurance programs and prescription medication programs will cover the cost of it. However, this has to be checked into with the appropriate coverage that a person has.

Esgic is an approved treatment for headaches and migraine that does not respond to other pain relievers.

However, it is essential to know that this formula is potent. People with non-disabling headaches don’t require such a potent mixture.

Esgic is a form of prescription medication. Like all the similar formulas, it has been associated with various unwanted side effects. Therefore, we recommend this product as the last form of treatment only when everything else has failed to show results. 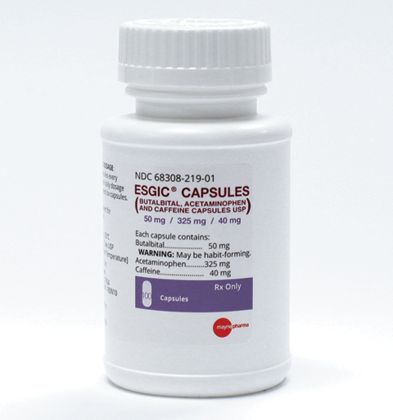