Alpha-lipoic acid, also called lipoic acid is an antioxidant that helps the body convert glucose into energy. Clinical evidence suggests that it can improve insulin sensitivity and glycemic control in people with type 2 diabetes, reduce the symptoms of age-related memory problems, and improve cognition. This potent ingredient is collected and manufactured by Nature Berg,  who claims that their product is highly effective in controlling age-related mental disorders, enhancing focus and concentration and fighting stress and anxiety by increasing the blood flow to the brain.

Alpha-lipoic acid by Nature Berg is a dietary supplement that restores and increases the levels of ALA in the body. This supplement has several mental and physical benefits that circle its main ingredient, ALA. Read on to learn more about ALA and health benefits provided by this compound.

Alpha-lipoic acid is a natural compound that is produced in the body. It serves vital functions at the cellular level, such as energy production. As long as you are healthy, the body can produce all ALA needed for these purposes. Research on the effects of alpha-lipoic acid supplementation is rare. What there is, however, suggests possible benefits.

The most valuable role of Alpha-lipoic acid in the body is to fight against the effects of free radicals, which are harmful byproducts of the chemical reaction formed during the oxidation process. In our cells, ALA is converted to dihydrolipoic acid, which has protective effects on normal cellular responses. In addition, alpha-lipoic acid functions as a synergistic agent with Acetyl L-Carnitine (included in this supplement), which is necessary to transform all macronutrient food into energy.

It can prevent motor impairment, damage to neurons, memory loss and changes in cognitive function due to its antioxidant properties. Alpha-lipoic acid appears to easily make its way through the blood-brain barrier, where it can protect the delicate tissues of the brain and nerves. It is also used to prevent strokes and other brain problems, including dementia in the elderly.

In addition, it can enhance performance in memory tasks, help reverse the damage in the aging brain cells, reduce oxidative damage and improve mitochondrial function.

6) Our Final Take On Alpha-Lipoic Acid

ALA is a fatty acid chain of antioxidants. It is extremely important for the production of cellular energy, as well as for the long-term maintenance of the cells, nerves and nerve endings. The antioxidant power of this supplement can help prevent damage caused by free radicals and improve cognitive enhancement. ALA supplementation is used by many for different reasons. Older people or people with cognitive impairment rely on an increase in memory capacity and the nootropic boost. By using this supplement, you can expect increased energy, enhanced cognition, healthy nerves and a stronger brain. 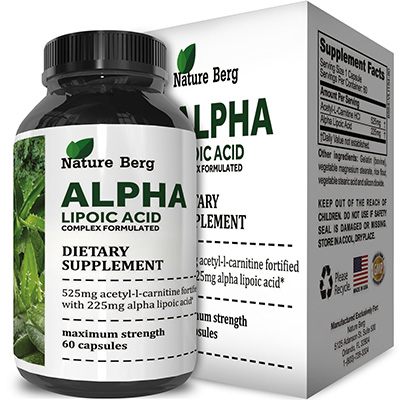