Zell Immunocomplex Review – Is it Effective?

Zell Immunocomplex is a multi-nutrient formula designed to support detoxification processes in the body with a minimum of unpleasant symptoms and support the immune system function.

The formula manufactured by Regenerative Nutrition may also assist with several other conditions such as in the reduction of Candida type symptoms, in energy production and support of sustained effort in athletes, in restoring cellular respiration, in improving nervous system function, in repairing damaged cells, and organs, while also acting as an antioxidant.

Regenerative Nutrition is a U.S. based company founded in 1994. Today, the company offers more than 100 products designed to assist consumers in a wide range of health needs, from psoriasis and panic attacks to anorexia and meningitis.

The company claims it is a pioneer in natural health and continues to develop and market a broad pallet of natural supplements.

Zell Immunocomplex is designed exclusively for adult use. The formula is also available to individuals with acute sensitiveness (and is called Zell Oxygen).

The formula contains several essential minerals, such as Chromium, Selenium, and Zinc, found in relatively larger quantities than typically found in foods.

Chromium is beneficial for digestion and plays an essential role in moving blood sugar (glucose) from the bloodstream into the cells. It is used as energy and to turn fats, carbohydrates, and proteins into energy.

Selenium has powerful antioxidant properties but plays a significant role in the immune system’s well functioning. Selenium signals cytokines, cells that then alarm the immune system that there is an infection or disease in the body.

Zinc is also used to boost the immune system and several other health conditions such as eye and ear infections, high blood pressure, and psoriasis.

Beta Glucan is a soluble fiber with potential benefits on lowering cholesterol, controlling blood sugar, and reducing blood pressure. Some scientists believe it also plays a role in the immune system function.

Notably, they claim that Beta Glucan stimulates the immune system and fights cancer. The Maitake mushroom extract, a good source of Beta Glucan, is frequently used to fight cancer because it apparently stimulates white blood cells that fight cancer development.

Other immune boosters like Immutol use beta glucans as their key ingredient.

3) What Does Zell Immunocomplex Do?

The manufacturing company claims that Zell Immunocomplex is specially designed to boost the immune system. Due to its formula that includes amino acids, enzymes, and many other ingredients such as secondary plant substances, Zell Immunocomplex seems like an excellent alternative to many other drugs for individuals intending to boost their immunity.

Zell Oxygen is the predecessor of Zell Immunocomplex. The last of the two is advertised as including more antioxidants and beta-glucans than the first.

However, scientists recommend using Zell Oxygen before starting with Zell Immunocomplex to let the body adapt to the last strength. The scientific research and the goal of Zell Immunocomplex are to provide the body with enough oxygen for it to function correctly because research has shown that most people around the world are oxygen-starved.

Their supplement intends to reduce cell respiration inadequacy because scientific research has discovered that this is the primary cause of oxygen deprivation rather than low oxygen levels in the blood.

Also, Zell Immunocomplex is advertised as good support for the body’s detoxification process with minimal side effects. Zell Oxygen has been used by a professor for 20 years to treat chronically ill patients, the predecessor of Zell Immunocomplex.

These patients had diseases ranging from Cancer to Schizophrenia and other forms of psychosis. Due to this, it was discovered that this supplement is a tonic for the entire body and a powerful antioxidant.

As Zell Immunocomplex is a more potent form of Zell Oxygen, the supplement might provide a proper immune system background.

6) How Much Does Zell Immunocomplex Cost?

Zell Immunocomplex is currently being sold in 250 ml bottles at an affordable price on the manufacturer’s website. The product can also be purchased from various other online retailers that might offer discounts or promotions.

The recommended daily dose of Zell Immunocomplex depends on the purpose of the treatment. Therefore, for maintenance use, the manufacturer recommends taking 30 ml per day. For assisting with particular health issues, a maximum of 60ml daily dosage is required.

If used for detoxification, 50ml 2 or 3 times daily for up to three days should be administered. We cannot assess whether the formula works or not, since no consumer reviews are online to consult.

Zell Immunocomplex is a formula containing many essential nutrients and chemicals needed for the body to function correctly.

Although there are no consumer testimonials to be consulted and help us evaluate the formula’s effectiveness, we believe Zell Immunocomplex has the credentials to work.

Its ingredients have been studied extensively and linked to the immune function one way or another.

The formula is also free of artificial preservatives, colorants, or flavorings, making it an excellent natural alternative. We advise you to carefully read the label before use, and, as much as possible, to ask a medical opinion before use. 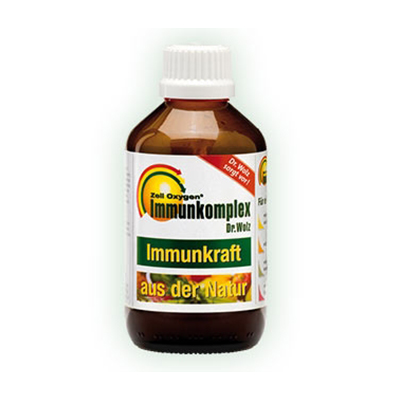 clear
Q:
What are the core ingredients in Zell Immunocomplex?
A:

Q:
Zell Immunocomplex is all about what?
A:

Providing the needed antioxidants, minerals, and nutrients required for a healthy lifestyle Zell Immunocomplex prevents many complications that might appear.

The manufacturer also claims that this formula is effective in dealing with anxiety and depression. Please note that you should consult your healthcare practitioner before taking any supplements.

Zell Immunocomplex is a dietary supplement aiming to boost the immune system through its formula. The supplement's formula includes antioxidants and living nutrition.

The company recommends that individuals with a low immune system start with Zell Oxygen, a lighter predecessor for Zell Immunocomplex, to let the body adapt.

Information about the clinical trials for Zell Immunocomplex and its effectiveness is available to the public on the manufacturer's website.

After being on steroids for Allergy treatment I was sleeping most of the day and through the night Depressed and very Anxious the next day after a Double dose, I felt the benefits. I had enough energy to function on a normal day without having to get to bed. MoodImproved. Able to cope better. I don’t mind the taste by was told to put in orange or apple juice

Title for your comment
Excellent. Highly recommended
Have you tried this product?
Yes
Reply
Nathan

Started using it after i felt like getting tired too fast. Got best results combatting fatigue in no time. Great product.

I am now reading a book titled Successful biological conrol of cancer by PG Seeger and S Wolz in which details of Zell Oxygen the forerunner of Zell Immunocomplex, worth research and a read.

I find the smell and taste repulsive, and am considering binning it after only two days.

I have taken this product for over 1 week. I am very disappointed since taking it my tummy has swelled and is bloated all the time. I have changed nothing in my diet and have a very good diet. I took this as I felt run down after a flu and serious of colds. Maybe it’s just me but not happy and have stopped taking it.

I also find my stomach bloated since taking this product