Enhancing the health of the intestinal environments, Gastro-Fiber contains ingredients like fennel that helps with indigestion, abdominal cramps, and gas relief. It is one of the newest product from Standard Process that was added on the nutritional field in 2002.

The producer is a company founded in 1929 in Milwaukee. Its creator is Dr. Royal Lee, known on the nutritional field under the nickname of “Einstein.” He relies his beliefs of optimal nourishment through supplements on the idea that the provenience of a component is more important than the amount used, no matter which dietary supplement contains it. Due to this, even a small amount of a whole food can impact positively the people taking it.

Gastro-Fiber offers both insoluble and soluble fiber which sustains the digestive system, thus promoting healthy intestinal environments that help maintain the intestinal flora. This sustenance is provided from the phytonutrients from the walls of the plant’s cells that should work together to enhance several intestinal functions. This mixture between botanicals and whole foods that contain multiple nutrients and soluble fiber compensates for an unhealthy diet of people surpassing periods of change that directly affects their eating habits or those with stressful jobs.

Promoted as a dietary supplement that supports healthy gastrointestinal elimination by enhancing the health of the digestive system, Gastro-Fiber features dietary fiber as a core ingredient. Generally speaking, dietary fiber is a term used to caractherize nondigestible carbohydrates that are found in the walls of the cells of plants. These have specific effects when it comes to various gastrointestinal functions.

For example, there are some compounds contained by dietary fiber that influence the time in which food travels throughout the intestine. By regulating the quantity of water absorbed by the intestine and others that are involved directly in the metabolizing fat ingestion, it improves the elimination processes, therefore helping people that take this treatment to detoxify their organisms and lose weight.

The main dietary fiber types are cellulose, lignin, bran, mucilage, gum, pectin, and hemi-cellulose. Soluble fiber can help prevent some issues that occur in the digestive system by stimulating the constant movement of waste materials which usually go through the gastrointestinal tract. Despite the fact that many natural foods contain dietary fiber, food refinement as well as processing usually eliminates a large quantity of these. Due to this aspect, most of the nutritional businesses have designed several supplementation forms to help the organism with the balance of dietary fibers.

3) Is Gastro-Fiber Right for You?

Presented as a remedy which should support healthy gastrointestinal elimination by improving the health of the digestive functions, Gastro-Fiber contains dietary fiber as the main ingredient. Usually, dietary fiber represents a term used to describe nondigestible carbohydrate substances which are found in the cellular walls of plants. These possess specific effects on various gastrointestinal functions.

For example, there are several compounds found in dietary fiber which influence the time took by the food in its travel throughout the intestine. By regulating the amount of water absorbed by the intestine as well as others which are involved in the metabolizing fat ingestion, it enhances the elimination processes, thus helping people who follow this treatment to lose weight and detoxify their organisms.

The main types of dietary fiber are cellulose, bran, lignin, mucilage, pectin, gum and hemicellulose. Soluble fiber may help prevents some problems which occur in the digestive system by stimulation the natural movement of waste materials that surpass the gastrointestinal tract. Even though many natural foods have dietary fiber, food processing, as well as refinement, usually removes a large quantity of these. Because of this aspect, most of the nutritional companies have developed several supplementation forms to help the human body balance a number of dietary fibers.

There are online customer testimonials about Gastro-Fiber. What is being reported includes the following:

Found for purchase usually in bottles containing 150 capsules, Gastro-Fiber is viewed as a moderate-priced product. People may order it either online from the manufacturer website if they’re in the American territory or from their local suppliers. Considering the fact that the daily suggested intake is of three capsules, three times per day only on an empty stomach, a bottle can last for up to fifty days. However, it is important to follow the product’s specifications properly to avoid any potential side-effects. It is one of the earliest releases of Standard Process, but it is currently selling pretty nicely because there are discounts and promotions offered by retailers most of the times.

The manufacturer recommends the daily intake of Gastro-Fiber to be of three capsules taken with water on an empty stomach.

8) Our Final Take On Gastro-Fiber

Promoted as a formula that provides help when it comes to lubrication and cleansing of the intestines, hence promoting a regular elimination, Gastro-Fiber contains dietary fiber mixed with a proprietary blend. Moreover, it promotes pH balance of the gastrointestinal tract, thus offering help to people who either want to lose weight surpass periods of stress in which their diets have nutrient gaps or have digestion problems like stomach cramps. It can found at moderate prices on either the manufacturer website or other online retailers. Most of the customer feedback revealed positive results. But it is important to take this supplement only on an empty stomach so that desired results are obtained. 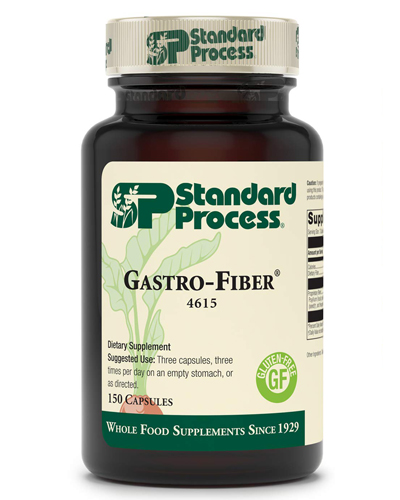 Customers Questions and Answers with Gastro-Fiber

Q:
What is Gastro-Fiber?
A:

Gastro-Fiber is promoted as a dietary supplement which offers both soluble as well as insoluble fiber in order to support the health of the digestive system. It was released on the nutritional market in 2002 by Standard process. Manufacturers claim that it adds vital nutrients to any diet and may be utilized as a nutritional support when following the Standard Process Purification Program. Additionally, lipid and blood sugar levels are normalized.

Q:
Are Gastro-Fiber benefits actually a reality?
A:

Presented as a formula that helps with lubricating and cleansing of the intestines, thus encouraging a regular elimination, Gastro-Fiber features dietary fiber in combination with a proprietary blend. Furthermore, it should promote pH balance in the gastrointestinal tract, thus providing help for people who either want to lose weight, have digestion problems such as stomach cramps or surpass periods of stress in which their diets lack essential nutrients. It is found at affordable prices on both the manufacturer website and online retailers. Most of the client feedback showed positive results. However, it is important to consume this supplement only on an empty stomach to obtain desired results.

I used this product under the supervision of a health practitioner. I was constipated the whole time during the SP 21 day cleanse. I told the person my discomfort when I came to their office. I was told to drink more water which I did. They also included some Chiro tea to drink to help with constipation and to take more of the gastro fiber. I even ate prunes. I was painfully constipated. I also noticed on the FB page for the 21 days cleanse other people were experiencing constipation too. I finished the plan. But it took weeks to get my digestion back to normal.

Title for your comment
I had an issue with it
Have you tried this product?
Yes
Reply
Sam D. Fondren

This product was very helpful in helping me lose weight. I would totally recommend it to other people

While on the 21 day Standard Process Cleanse and taking the Gastro Fiber as directed I had constipation the entire time. I took it for 30 days and I have ceased taking it after hours and hours of attempts at having a bowel movement. After the first 10 days I notified the one who got me on the cleanse and they said that corporate suggested cutting back to 4 a day. It did not do anything it said it should do. And I never had this problem before.