Vegan Omega-3 DHA-EPA Delayed Release is a supplement which can provide the same many benefits as non-vegan fish oil products. It’s manufactured for company Deva Nutrition, who is from Florida or Alabama. They were founded over ten years ago, but information is still scarce. Deva doesn’t appear to like talking about itself, just its products. For people who are environmentally conscious and support the protection of animals, Deva is a place you will want to buy from. All of their products are vegan or vegetarian, and the company is committed to selling supplements which are either organic, free-trade, cruelty-free, or all three.

Capsules contain about 200 mg of Omega-3s, including at least 120 mg DHA and 60 mg EPA. Due to some natural product variation, your capsules might contain more. Omega-3s have a lot of benefits, generally for your cardiovascular system and overall brain health. DHA in particular works best with the very young and very old. DHA is very important for children because of how it promotes cognitive development. It can also aid eye function and development. Since people don’t tend to get enough essential Omega-3s in their daily diets, supplements serve a vital role.

You can take one to two capsules a day, and each bottle contains 90 capsules. Even if you take two a day, this is a reasonably priced supplement. The price is slightly below average for a typical supplement. And it’s very below average for a vegan Omega-3 supplement. You’ll likely be able to find a fish oil which provides the same amount of DHA for a lower price, but this product will be higher quality overall. Some sites provide free shipping, making this extra affordable. They ship within the United States and several other countries. You can also buy Deva supplements in some brick-and-mortar stores. There’s a link on the company website which allows you to find which stores are the closest.

The Food and Nutrition board recommends that children – from newborns to 13 years old – take different amounts of DHA. Children will need anywhere from 500 mg to 1200 mg of Omega-3s a day for optimal impact. Smaller amounts can work too, especially since some foods contain Omega-3s. If you want to use more than 1 or 2 capsules of Vegan Omega-3 DHA-EPA Delayed Release a day, a maximum of 4 capsules would be recommended. Again, dependent on age. Older adults may need up to 900 mg of DHA a day. Women who are pregnant or nursing can also benefit greatly from DHA supplements.

Deva Nutrition is a somewhat popular company with a wide distribution network. They sell their supplements through many companies, both online and in real life. You’ll be able to find the best option for you, which may often include free shipping. Vegan Omega-3 appears to be a high quality supplement which won’t cause adverse effects. It’s a sustainable and environmentally friendly source of Omega-3s which can be superior to many fish oil products. Most people are bound to really enjoy this supplement. It represents a step forward in the industry, in several ways. 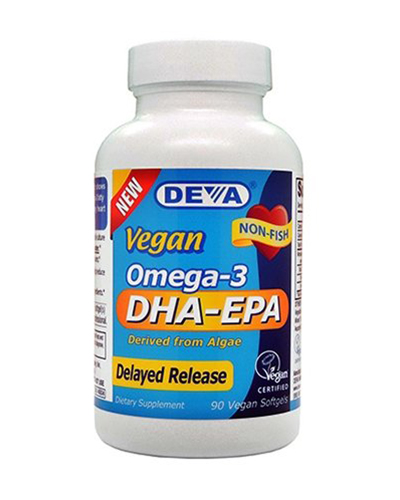 clear
Q:
What are the active ingrediens in Vegan Omega-3 DHA-EPA Delayed Release?
A:

This doesn't have many reviews or testimonials, but the existing ones are rather positive. Judging from the formula, ingredients, and company itself, Vegan Omega-3 DHA Delayed Release appears to be a good product. The company is dedicated to having natural, sustainable, environmentally friendly products. Few supplement manufacturers are 100 percent vegan. This is also an affordable high quality alternative to fish oils, which are indisputably good for your heart and brain.