Valerian Poppy Supreme is advertised as a synergistic blend designed to promote calmness and relaxation throughout the body. The alcohol-free formula is offered by Gaia Herbs, a well known manufacturer of herbal supplements. Additional benefits include support during occasionalstressfulsituations and promoting a sound, restful sleep.

Gaia Herbs is a United States based company with a market experience of over 20 years. The company takes pride in growing and using only Certified Organic (COG) medicinal herbs for manufacturing its herbal products. They’re also the same company behind Stress Response.

The formula should be used occasionally, and for a maximum 1 month period. Valerian Poppy Supreme is designed to be used by adults over 18 years old, except pregnant and breastfeeding women. Further precautions refer to people suffering from liver conditions, or under any other medication.

The Valerian root is used for its medicinal benefits for thousands of years. Traditionally, it was prescribed for sleep disorders, nervous system problems, headaches, and arthritis. Today, Valerian is commonly used to alleviate symptoms of insomnia and to treat various anxiety disorders, including stress symptoms.
There is a large amount of research available on Valerian; however the exact mechanism of action sis not completely understood. It appears that Valerian acts on the synthesis and metabolism of the chief inhibitory neurotransmitter GABA, which in fact leads to calming the nervous system and the brain. Potential benefits of Valerian for which the plant was or still is scientifically investigated includes ADHD, post-traumatic stress disorder, panic attacks, PMS (Premenstrual Syndrome) or obsessive compulsive disorder). Side effects include nausea, drowsiness, dizziness or headache.

Kava Kava is a controversial herb which possesses strong medicinal properties but may also have intoxicating effects. It is believed to help relieve anxiety symptoms such as irritability and muscle tension and to help promote overall emotional well being. Several European countries approved it as a treatment for generalized anxiety disorder. Other uses include rheumatism, gout, or incontinence. Serious health concerns exist regarding mouth use of Kava Kava. Serious liver damage has been reported even with short term use.

3) What Does Valerian Poppy Supreme Do?

Valerian Poppy Supreme is a blend of herbs. Skullcap is known and used for hundreds of years for a broad spectrum of potential benefits. Certain anxiety disorders such as post-traumatic stress disorder, separation anxiety or stress have been treated with Skullcap. Also, it appears that the plant may alleviate insomnia and nervousness symptoms and helps manage immune system diseases such as allergies or asthma.

Also, the plant may help relieve symptoms of tension headaches, PMS or attention disorders including ADD and ADHD. Skullcap is considered safe; however, health concerns exist in the case of pregnant and nursing women, young children, and other types of patients. Poppy has sedative, analgesic and antispasmodic properties. Its seeds contain considerable amounts of minerals and essential fatty acids. The plant is used to treat insomnia, bedwetting and incontinence, nervousness and anxiety. Its sedative properties make it an alternative treatment of behavioral conditions such as ADD and ADHD, particularly in children. Precautions refer to pregnant and breastfeeding women. No side effects are known.

The manufacturer issues a safety warning for people suffering from liver problems, pregnant and nursing women, and people under treatment. Also, it warns that if side effects should occur (such as nausea, weakness, stomach pain, vomiting, light-colored stools, tiredness, and loss of appetite, brown urine, etc.drops) a healthcare provider be contacted immediately.

The price of Valerian Poppy Supreme is rather high but comparable to products featuring these same ingredients. A 1-ounce bottle (approximately 22 days’ supply) can be purchased for roughly $30. Retailers may offer certain price discounts and other promotions, in which case you may be able to purchase the formula at a lower price. No money-back guarantee is available for Gaia Herbs products.

The manufacturer of Valerian Poppy Supreme warns against the use of the formula for certain categories of people, including those with liver problems, pregnant women, etc. Side effects include nausea, vomiting, stomach or abdominal pain, light colored stools, tiredness, weakness, and loss of appetite. For optimum results, you should use 40 to 60 drops taken every 20 minutes beginning 1 hour before bedtime in maximum 3 such servings a day.

Valerian Poppy Supreme is advertised to promote overall calmness and relaxation, help with sleep and assist with occasional stress. The main ingredients have been traditionally used and research by modern medicine means and linked to such properties. Kava Kava however is considered potentially unsafe and serious harms could be done especially to certain categories of patients. The formula comes in a liquid form, easily absorbable. We advise that you consult your specialist before using this formula, and, if not possible, to contact one as soon as the first symptoms or side effects appear. 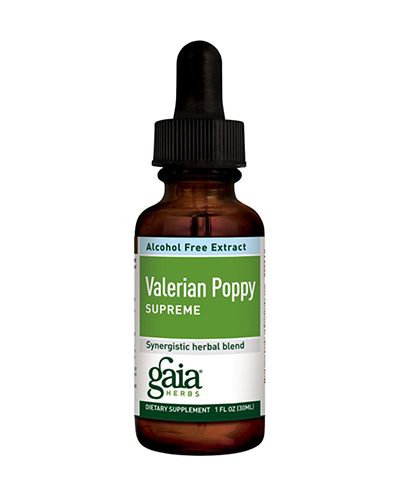 clear
Q:
What are the Valerian Poppy Supreme ingredients?
A:

Q:
What is Valerian Poppy Supreme?
A:

Valerian Poppy Supreme is an herbal supplement advertised to promote a sense of calmness and well-being, while also promoting relief for occasional sleeplessness and stress. The formula manufactured by Gaia Herbs features as core ingredients potent herbal remedies such as Valerian, Skullcap, Chamomile or Poppy, which are known to be helpful against anxiety disorders (post-traumatic stress-disorder, panic attacks, etc), sleep disorders such as insomnia, attention problems (ADD and ADHD) among other benefits. Valerian Poppy Supreme is a liquid formulation and should be used for a maximum period of 1 month.

Valerian Poppy Supreme is one of the many herbal supplements on the market advertised to promote calmness and support healthy sleep and stress response. However, the formula should not be used for more than one month. There are no consumer reviews online, which makes it difficult for us to assess its actual Effectiveness. What we do know is that one of its ingredients, Kava Kava is considered unsafe and hence the formula should be used with caution. As much as possible, we advise that you do not use this formula unless recommended by a physician.

My mother used Valerian when she had trouble sleeping. When I experienced sleeplessness myself, she said I should try Valerian Poppy Supreme. I don’t wake up after 3 or 4 hours of sleep and I wake up refreshed. Also, my attention seems to be a little sharper.

I am going through a very stressfull time, with my finals coming up and a job I work from 9 to 2. Valerian Poppy Supreme helps me relax and sleep throughout the night, and I don’t have to worry about side effects.

I have been cycling one month on one month off for a couple of years. i find it better than sleeping pills in most regards. very nice hypnotic relaxtion before you drift off. Relaxation and storm music sound a lot better as well. Tastes horrible so put it in a gelatin capsule you will regret it if you dont. Mild grogginess first day or so cycling back on. No liver problems so far.

Initially I thought we were calling the doctor but I think I used too much water and it just made me nauseated. That resolved quickly. I am already feeling more relaxed so hoping this resolves my being up all night. Mone DOES contain 50 to 60% grain alcohol so you might check that ingredient. Definitely more calm now.