Ginseng Booster is advertised as a dietary supplement that comes as completion to healthy lifestyle and seeks an enhancement in energy levels, reduction of mental and physical exhaustion and vitality restore. The nutritional company behind this supplement is named Botanic Choice and was founded in 1910.

This business was initially named Indiana Botanic Gardens and was created by Joseph E. Meyer. Its founder was born in Wisconsin in the year 1878 and his passion towards nature and all the things it has to offer people led him to find a way in which he could deliver daily nourishment to people in an easy-to-use form. The company is currently led by his grandson and great-grandson who desire to provide innovative, high-quality, and reliable supplements. Furthermore, people who want to visit this company can do it from Monday to Friday in downtown Chicago.

In this specific supplement there are a lot of herbal extracts among which the most popular are Korean and American white ginseng and Eleuthero root. The formula wants to directly impact the energy levels and cognitive support in functions such as focus, learning, memory, attention, and concentration. By lowering physical and mental tiredness, this product should improve all features of a person’s life.

Promoted as an energy booster containing ingredients which come from natural sources, some with scientifically proven benefits, this remedy is recommended for people of all ages who deal with fatigue, stress, exhaustion and lack of energy on a regular basis. As compared to other similar products, this one doesn’t possess a classic ginseng extract, but a mixture from various origins such as Korea and America. Alongside this combination, the producers also included Eleuthero root.

Studies revealed that this ingredient is a medicinal plant that has a wide array of benefits for general health. It is thought to act as an adaptogen, meaning that it enhances the organism’s protection against the harmful damage of free radicals. In addition, its pigments are believed to provide a positive effect when it comes to diseases such as chronic fatigue syndrome, Alzheimer’s disease, bronchitis, and atherosclerosis. Furthermore, it may improve mental performances in people who suffer from stress-induced fatigue, but only if it’s in moderate proportions.

Advertised as an energy booster featuring ingredients obtained from natural sources, some of which with scientifically proven results, Ginseng Booster is suggested for individuals of all ages who deal with stress, exhaustion, fatigue, or lack of energy on a daily basis. Unlike other similar remedies, this one doesn’t feature a classic ginseng extract, but a combination from various sources that come from Asia and America. In addition to this herbal mixture, the manufacturers included Eleuthero root.

Research revealed that this component represents a medicinal herb that possesses a broad range of benefits for overall health. It is believed to act like an adaptogen which means that it should enhance the body’s protection against stress and tiredness. Additionally, its pigments are thought to have a positive impact on diseases like bronchitis, Alzheimer’s disease, chronic fatigue syndrome, and atherosclerosis. Moreover, it may enhance mental performances in individuals that suffer from stress-induced fatigue of mild proportions.

There was a study led in 2004 by Psychological Medicine that discovered that this ingredient might provide a positive impact for people that have moderate fatigue. On the other hand, those with more severe conditions that participated in the study didn’t show any improvement. Although it’s often referred to as Siberian ginseng, it’s not a part of this family.

Potential side-effects linked to its utilization include disturbances in the heart rhythm and anxiety. These mostly depend on the patient and the daily intake from this component. This is why people with high blood pressure, heart issues, hypersensitive to certain plants, as well as pregnant or nursing women should only start this treatment after consulting with a personal doctor.

6) How Much Does Botanic Choice Ginseng Booster Cost?

A bottle from this remedy lasts for thirty days because it contains sixty capsules and the daily suggested intake is of two per day. The manufacturer offers international shipment which means that people from outside the United States can also order directly from their official websites, but with higher shipping costs. Overall, its price is moderate, and most of the people that have tried it reported good results and some of them even thought it was affordable. Furthermore, the Auto Refill Program provided by its producer leads to lower shipping costs on the purchases that follow the first, and it may be obtained by calling a number found on their web page.

Possible side-effects that may appear during its usage include heart rhythm disturbances and anxiety. These mainly depend on the person and the daily consumption of this component. However, individuals who suffer from high blood pressure, have increased cholesterol levels or heart issues should consult a personal doctor prior to beginning this treatment, particularly if another prescription treatment is followed alongside.

Promoted as a formula delivered in capsules that are easy to use, Ginseng Booster is a combination between some plant extracts and a proprietary herbal blend. Even though it is recommended for individuals of all ages, parents should monitor their children if they decide to let them follow this treatment. The supplement is meant as an alternative approach to medication for physical and mental exhaustion because of stress, lack of sleep, and other potential damaging aspects which are the result of an improper daily schedule. However, in order to see results faster, people should think about reorganizing their lives while taking this supplement. 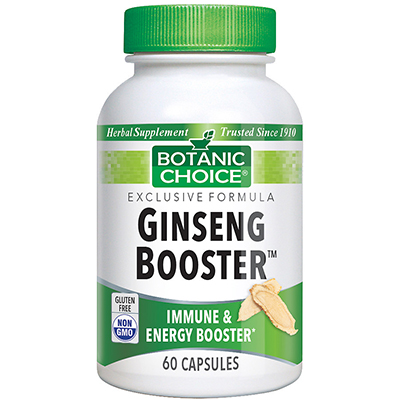 Q:
Botanic Choice Ginseng Booster is all about what?
A:

Ginseng Booster represents a dietary supplement which seeks to improve energy levels in regular people. It was designed by a company that comes with a reliable experience on the natural supplementation field called Botanic Choice. The product is a multi-herbal blend whose main ingredients are Korean and American ginseng and Eleuthero root. It should have a positive impact on bodily features like cardiovascular, immune, and nervous health. People who are allergic to some plants should consult a doctor before taking it.

Presented as a formula packed in capsules which are easy to use, Ginseng Booster represents a mixture between a proprietary herbal blend and other plant extracts. Although it is suggested for people of all ages, the children should be monitored during its usage. The product is desired as a natural approach to prescribed medication for mental and physical exhaustion because of stress, lack of sleep, or other damaging features that are results of a bad dieting, lack of exercising or a ravaging daily schedule. Some side-effects may be noticed during its utilization, and even though they are mild, people should immediately disrupt the treatment if they notice them.

I can’t believe I’ve survived so far without this.. it’s the best energy booster product I’ve tried so far. I mostly like it because it doesn’t come with headaches and diarrhea like other I’ve tried before it.