Ginger Root is described as an alcohol free extract of the Ginger root which promotes healthy circulation and digestion. The formula offered by the manufacturing company Nature’s Answer is a holistically balanced standardized extract guaranteed that its constituents are found in the same synergistic ratios as in the plant. The manufacturer claims to use a proprietary chelation process which uses alcohol, water and natural extractants.

Nature’s Answer is a company set up in 1972 in United States. It currently operates a manufacturing facility which complies with cGMP (Current Good Manufacturing Processes) regulations set forth by the FDA. The company claims to be committed to delivering high-quality, naturally-derived products for the needs of the entire family.

Ginger Root is designed for adults, except pregnant and nursing women who are advised against its use.

Ginger Root is a liquid herbal extract of the Ginger root.Ginger has been used as a remedy for numerous ailments for many centuries. Among the most common uses, we mention certain types of cancers (ovarian cancer, colon cancer, etc), pain and inflammation, morning sickness, arthritis, cold and flu prevention and treatment, migraine headaches, PMS symptoms and prevention of diabetic neuropathy among others. Recent evidence shows additional benefits, particularly as a memory enhancer. Its high content of antioxidants helps fight free radical damage and might even prevent diseases such as Alzheimer’s and Parkinson’s disease. Further research is required to prove this property.

A study conducted recently which included 60 women who daily consumed Ginger showed improvements of cognitive functions and enhanced working memory. Ginger is considered generally safe. However some people have reported mild side effects such as heartburn, diarrhea and stomach discomfort.

3) What Ginger Root Does?

4) Precautions of Ginger Root Use

5) How Much Does Ginger Root Cost?

Nature’s Answer Ginger formula is available in alcohol-free liquid extract, alcohol based extract and liquid capsules. The present review analyzes the alcohol-free formula which is available in bottles of one and two ounces. The one ounce contains approximately 30 servings and costs approximately $19. This price is similar to those available with other formulas with this configuration. This formula is covered by an unconditional 30-days money back guarantee. The manufacturer, however, mentions that it applies only to products purchased directly from them and not from other retailers, online or offline. The formula is available for purchase from numerous retailers and stores. These may be identified by using the Store Locator feature of the manufacturer’s website.

Ginger Root has received several reviews from consumers. Most of them claim the formula is effective in soothing pain and irritations of any kind, while also being easy to use. The suggested dose is ½ – 1 ml (approximately 28 drops) per day.

Ginger has been touted for a large number of benefits, from digestive system to mental performance. The formula offered by Ginger Root is a liquid, alcohol-free extract advertised to be holistically balanced (maintain the ratio of active constituents found in the plant from which the extract is obtained). Consumer testimonials referencing the formula claim it is effective and accomplishes its advertised purpose, while others claim extra benefits than what is mentioned by the manufacturer. The formula is not designed however for the use of pregnant and nursing women and there are certain side effects which have also been sometimes associated with Ginger use. 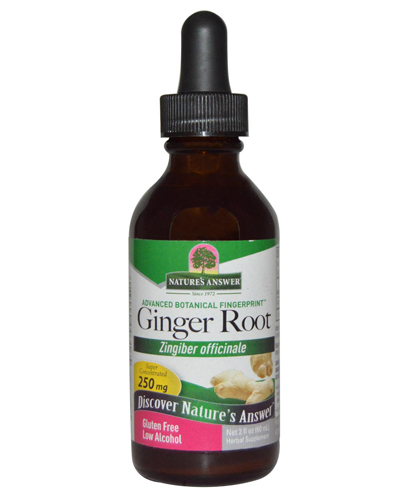 clear
Q:
What are the Ginger Root ingredients?
A:

Ginger has long been used for a series of health conditions and ailments, due to its anti-inflammatory and antioxidant effects. Nature’s Answer Ginger is a potent liquid extract from the root of Ginger, a plant which enjoys large scale popularity as an herbal remedy. The formula received positive reviews from consumers, although not many in number. The majority of consumers claim the formula assists with what is being advertised: circulatory and digestive health. The product may hence be considered effective to a certain extent. Also, it comes with a 30 days money back guarantee provided it is purchased directly from the manufacturer.