Stem Xcell has been advertised to be a dietary supplement that has the desired effect of promoting the growth as well as the health of stem cells.

Stem Xcell has been developed and manufactured by a United States business called Enzymedica, which was founded in 1998 in Florida. This company is currently specialised in the development of enzyme based dietary supplements, which are designed to provide targeted effects, dealing with specific conditions. Over the years, this company has won a number of awards for their products, the most recent being for Best Supplement Award in 2012.

After being studied, this product has been concluded to promote stem cell nutrition as well as renewal, doing so by interacting with the adult population of stem cells in the body; these cells have the role of maintaining and repairing tissues in the body. Each ingredient present in this formula is said to be effective on its won, but when combined the result is a potent and effective product that supports stem cell health. This formula also has the added effect of sustaining the immune system and optimizing antioxidant delivery. Stem Xcell is also a vegetarian friendly formula that is said to have a proven approach to the natural regeneration of cells.

This formula represents a mixture of enzymes with other active ingredients that all have the desired effect of sustaining stem cell health.

Carnosine is an ingredient that plays an active role in this formula, being a protein building block that is naturally manufactured in the body and is found in high concentrations in the heart and brain, as well as in muscles that are working. This ingredient is most commonly used for its effects that prevent aging and can also be effective with nerve damage associated with diabetes, eye and kidney problems. A study conducted with this substance has also shown it to be effective in cell rejuvenation, having anti-aging properties.

Alpha Lipoic Acid is another active ingredient found in this formula and is a vitamin-like substance that can be found in certain foods, such as broccoli, potatoes, spinach, and liver. This is an ingredient that has been used with success in order to help with symptoms associated with diabetes like numbness and burning pain. One study has observed that this chemical also provides support for stem cells. The only side effect reported is a rash, but we advise pregnant or nursing women not to use this ingredient because insufficient information is available at this time.

This product based on enzymes, but also has a vitamin, an amino acid, and several herbs in its composition.

One of the active ingredients that are found in this product is called Alpha Lipoic Acid and is a vitamin-like chemical that has a powerful antioxidant effect. Foods like spinach, liver, potatoes, and broccoli are some foods in which this chemical can be found. This ingredient has been most commonly used for its positive effect regarding symptoms associated with diabetes, such as burning pain and numbness. There also are some people that use this ingredient as to aid with memory loss, cancer, chronic fatigue syndrome, heart and blood vessels disease, liver disease, and Lyme disease. A study conducted has observed that the use of Alpha Lipoic Acid can support stem cells, which may help diabetic patients that suffer from the diabetic foot. The only side effect reported was a rash, but pregnant or nursing women should not use this ingredient because not enough information is available.

One other active ingredient in this blend is a protein building block called Carnosine, which is naturally produced in the body and is concentrated in muscles when working, as well as in the heart and brain. This ingredient is used as to prevent aging and can also help with nerve damage due to diabetes, eye damage and kidney problems. One study has shown that Carnosine can play a role in cell rejuvenation, offering anti-aging properties as well. There is still insufficient information as to assess the safety of this product.

The manufacturer suggests a use of 2 capsules per day, or as indicated by a healthcare practitioner.

5) Precautions of Stem Xcell Use

This product can be purchased directly from the manufacturer’s website and has a high price. Every container of formula comes with some 60 capsules and provides a one month supply if the suggested use of two capsules is respected. The manufacturer does not offer a free trial, but there is a full money-back guarantee available. The shipping costs depend on the location of the purchase, but the manufacturer also has contracted with some physical retailers that also hold this product. Online retailers also commercialize this formula and other similar ones as well in different price ranges.

Stem Xcell comes in a container that holds 60 capsules; the manufacturer suggests a use of two capsules per day.

8) Our Final Take On Stem Xcell

Stem Xcell is a dietary health product that combined the effects of several ingredients, like enzymes, amino acids, and herbs into a formula that aims to support the health and growth of stem cells. The manufacturer is a business situated in Florida, United States and has a 15 years experience in developing enzyme based supplements. The manufacturer claims that this product is quite effective and designed a container that holds 60 capsules, which at the suggested use of two capsules per day provides a one month supply. The price of Stem Xcell is quite high, but a full money-back guarantee is available. 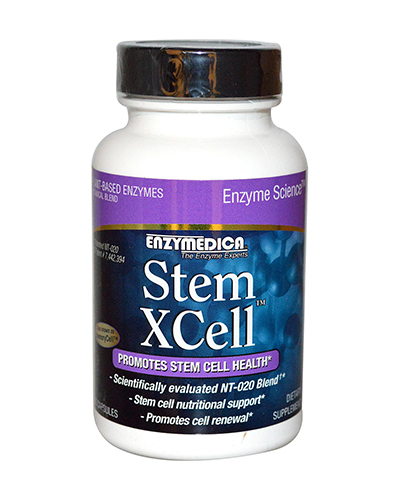 Q:
What is Stem Xcell supplement?
A:

Stem XCell is a product manufactured by Enzymedica, made for your cellular health. And, as everyone knows, cellular health is the most important thing of all, as it stands for the basis of the body. The product contains carefully blended ingredients, made with the help of the Thera-Blend technology. This enhances the enzymes and their effectiveness throughout the body. Stem XCell will protect the immune system and provide optimal antioxidant absorption.

Stem Xcell is a dietary health supplement that was made using a blend of several ingredients as to formulate a product that supports the health of stem cells, which play a crucial role in the body. The manufacturing company is a business that was founded in 1998 and is specialized in producing formulas that are enzyme-based. This formula has ingredients that are said to help with conditions like diabetic nerve pain, eye disorders and can also support the immune system. One container provides a one month supply, having 60 capsules with the suggested use of two capsules per day.