EGCG Review – 6 Things You Should Consider

First of all, EGCG stands for epigallocatechin gallate, a polyphenol (chemical compound) that is the most abundant catechin in green tea. Although it is found mostly in the long ingredient lists in brain enhancement supplements, many manufacturers do sell the ingredient on its own. When isolated from green tea into its own product, it is usually taken as capsules, pills, and tablets.

In isolated capsule form, it is extracted and manufactured by Weyland Brain Nutrition. It is a renowned American company who claim that this product is created primarily to affect the cognition and memory positively. All products by this company are manufactured in the USA at an FDA inspected cGMP, and 3rd party rated facility. They guarantee your satisfaction, or we will refund 100% of your purchase, including shipping costs.

As you know, green tea has potent antioxidant properties. These antioxidant properties are derived from ingredients called catechins, also known as green tea catechins or GTC. The catechins in green tea are four molecules, large quantities of which are present in green tea and other sources. Out of these, the most potent and effective is EGCG. All the benefits of EGCG-improving cognition are dependent on being caffeine naive. Recent studies have shown that EGCG could be a powerful natural cognitive enhancer.

Green tea has been known to boost metabolism and enhance your body’s natural properties in improving the brain health. For years, green tea extracts have been used in brain formulas and diet pills, where it is prized for its caffeine, flavonoid and catechin content. Together, these three active ingredients lead to powerful advantages. However, recent studies have shown that flavonoids and caffeine only play a minor role compared to the primary green tea catechin,” the EGCG.” EGCG is a unique catechin that can stimulate blood circulation, improve brain health and increase concentration and focus.

The primary brain health benefits of EGCG are attributed to its potent antioxidant and neuroprotective properties. As a powerful antioxidant, it reduces damage from free radicals and reactive oxygen species. Being a neuroprotective chemical, EGCG is found to be effective in protecting neurons and brain cells. Thus it is indirectly helpful in reducing age-related cognitive decline and mental disorders. If you want to enjoy the potential benefits of green tea without actually drinking it, you should want to consider buying this EGCG green tea extract nootropic.

Weyland EGCG supplement is said to support brain function and focus. Customer feedback seems to support this claim, as many have said that the product works very well. Another advantage of buying this product is that the capsules are vegetarian. Individuals with a restricted diet find it attractive because many supplements are non-vegetarian and non-vegan. However, it is recommended that people taking prescription drugs due to some health issue, pregnant, planning to become pregnant and nursing should consult with a doctor before taking this supplement. 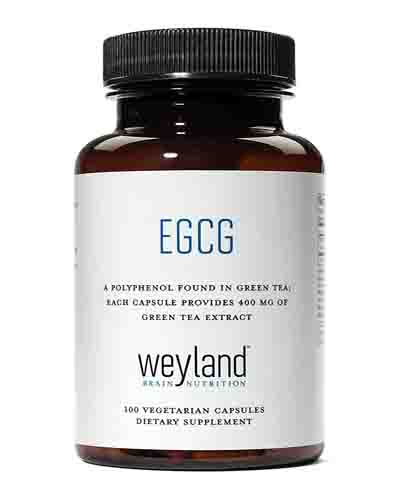