DMAE or Dimethylaminoethanol, has become a recurring name in the supplement industry. Its core marketed benefit is enhanced concentration and memory functions.

Research has shown that DMAE may be a biochemical precursor to the neurotransmitter acetylcholine; however the conclusions of research so far are still under debate.

Source Naturals DMAE is a single ingredient nootropic supplement based on DMAE (Dimethylaminoethanol).

Source Naturals is a US-based company established in 1982 that has patented and markets many popular formulas such as Higher Mind, Skin Eternal, and Mega Kid Multiple.

This article discusses the uses and potential benefits of DMAE, its side effects, and much more. Keep reading to know more about this supplement.

1) Source Naturals DMAE at a Glance

Source Naturals DMAE is based on Dimethylaminoethanol, an increasingly popular ingredient in the nootropic industry.

Although conclusive research is yet to be conducted, studies and clinical trials have proven DMAE to positively impact learning abilities in children with ADHD (attention deficit hyperactivity disorder) and other learning disabilities by boosting cholinergic transmissions.

Acetylcholine, the compound that DMAE is thought to mimic, plays a crucial role as a neuromodulator in both the peripheral nervous system and the central nervous system (CNS) functioning. Particularly important functions and roles of Acetylcholine within the CNS include, enhancement of sensory perceptions upon waking up and sustaining attention.

Furthermore, many studies have shown it to reduce age-related decline in cognitive ability and memory potentially, and people who have tried DMAE have reported better memory, particularly short-term memory, and improved concentration and mental clarity.

Also, given its alleged connection to Acetylcholine, DMAE is believed to improve sleep, as Acetylcholine has been shown to promote REM sleep.

Source Naturals, the manufacturer of this supplement, issues a warning to pregnant, trying to conceive, and breastfeeding mothers and advises caution to patients who suffer from epilepsy.

Most DMAE reviews are generally positive, with consumers reporting increased effectiveness and little to no adverse side effects.

Source Naturals was created in 1982 to help individuals enjoy health. Its primary purpose was to boost general well-being and overall health by combining herbs and other naturally sourced ingredients to produce high-quality supplements.

The primary ingredient in Source Naturals DMAE is DMAE (from 351mg Dimethylaminoethanol Bitartrate).

DMAE works by increasing the production of acetylcholine (Ach), a neurotransmitter that supports cell signaling and communication in nerve cells.
Acetylcholine also helps regulate many brain functions, including movement and sleep.

DMAE’s effects on alleviating cognitive decline and memory loss that happens with age or conditions like Alzheimer’s are due to its ability to prevent beta-amyloid buildup in the brain. Beta-amyloid is a protein that can form plaques in the brain and disrupt brain and nerve cell functions.

Some of the claimed benefits of Source Naturals DMAE are;

Source Naturals DMAE is generally safe for use as directed; however, some users have reported headaches, difficulty sleeping, and muscle twitching from using DMAE itself.

6) Where to Buy Source Naturals DMAE

You can purchase Source Naturals DMAE from online retailers like Amazon, Swanson Vitamins, and iHerb.

When bought in larger quantities, various websites may offer discounts and promotions.

Take one tablet once or twice daily, preferably with a meal, or take it as directed by a healthcare practitioner.

Source Naturals DMAE is one of the many formulas today that use DMAE as a core ingredient (alone or combined with other ingredients).

Although little research has been done concerning DMAE, it has shown promising results in improving memory and concentration, according to many user testimonials.

Source Naturals DMAE is manufactured in keeping with quality standards and is available in tablets and capsules for user preference. It is also relatively affordable for customers who want to try it out.

Although this supplement could effectively improve memory and concentration, it should only be used as directed and after consulting a physician if you have any medical illnesses or are on any medication. 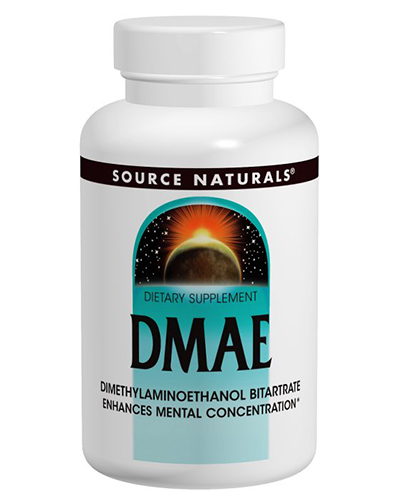 clear
Q:
What are the core ingredients in DMAE?
A:

The primary ingredient in Source Naturals DMAE is DMAE (from 351mg Dimethylaminoethanol Bitartrate).

Q:
Is DMAE safe without dangerous side effects?
A:

Source Naturals DMAE is generally safe for use as directed; however, some users have reported difficulty sleeping and muscle twitching from using DMAE itself.

You can purchase Source Naturals DMAE from online retailers like Amazon, Swanson Vitamins, and iHerb.

Q:
How much does DMAE cost?
A:

Q:
What are the advantages of taking DMAE?
A:

DMAE, the primary ingredient in Source Naturals DMAE, has been used to boost memory and concentration and alleviate symptoms of cognitive decline in ADHD and Alzheimer's.

Q:
Are there any dangerous ingredients in DMAE?
A:

Source Naturals DMAE only has one active ingredient that is safe for use as recommended.

Q:
Who should take DMAE?
A:

Individuals looking for an effective supplement to increase mental concentration can use Source Naturals DMAE.

Q:
How should I take DMAE
A:

Take one tablet once or twice daily, preferably with a meal, or take it as directed by a healthcare practitioner.

Q:
How do I contact DMAE customer service?
A:

From my research,a supplement which affects a dieter’s mental state should be backed by proven scientific research. Source Naturals does not offer any such studies.