A National Health and Nutrition Examination Survey found that 37% of Americans take dietary supplements which have vitamin D in them, but most of those supplements don’t provide nearly enough D. Average intake levels, varying by age and gender, ranged from 144 IU to 288 IU a day. With supplements, the mean was around 400 IU a day – far less than the 600 to 800 IU a day that’s recommended for optimal health.

With every serving of Solar D Gems you get a large 4000 IU of vitamin D, 500 mg of fish oil, and tiny amounts of vitamins A and E. The fish oil includes 115 mg of Omega-3 fatty acids. Fish oil and Omega-3s assist with cardiovascular health, fighting off heart disease and high triglyceride levels, and may improve mental function. With Solar D Gems there are enough nutrients for you to get a lot of what you need to keep a healthy mind and body every day.

Each soft gel capsule has 4000 mg of vitamin D, 500 mg of fish oil, plus very small concentrations of vitamins A and E (under 5% of your daily value). The fish oil includes a little more than 100 mg of Omega-3s, essential fatty acids which help mental function run smoothly.

Vitamin D is necessary for healthy bones. It promotes calcium absorption and maintains levels. Without sufficient amounts of this vitamin your bones could become thin and brittle. It’s an important part of preventing osteoporosis. It also reduces inflammation and modulates cell growth while helping neuromuscular and immune function. The Food and Nutrition Board at the Institute of Medicine of The National Academies recommends that most people take in 600 IU of vitamin D daily. You may need more depending on your age and healthiness.

Vitamin D doesn’t occur naturally in a lot of our food, and we rely partly on sunlight a lot for our bodies to get D. The best sources are considered seafood: cod liver oil (like what Carlson Labs uses), swordfish, sockeye salmon, and tuna fish.

5) What You Need to Know Before Taking Solar D Gems

6) How Much Does Solar D Gems Cost?

Capsules come in bottles of 120. Since you can only take one a day, this is a four month supply. There’s also an option to purchase Solar D Gems in a quantity of 360 which lasts an entire year. You can take two capsules a day instead of one – although this isn’t recommended, each bottle would then last two to six months. Solar D Gems are already inexpensive, and you can find them online for about half the MSRP. Considering what you’re getting, “dirt cheap” describes the price of Solar D Gems.

People should not take more than the serving size listed on each bottle of Solar D Gems. One to two capsules a day is the absolute maximum you should have. Any more than that, and you risk vitamin D toxicity – sometimes there’s too much of a good thing.

One capsule of Solar D Gems gives you enough vitamin D to catch up with your dietary needs in a timely fashion. This is also the maximum recommended amount of vitamin D people should have on a daily basis, which means Carlson did their research, and checked the science before creating their formula for Solar D Gems. Reviews are overwhelmingly positive and this is definitely a great product. It’s high quality and low priced, sold by a company with a good reputation. 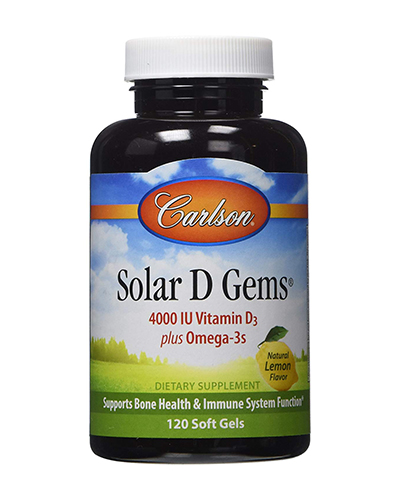 clear
Q:
What are the active ingrediens in Solar D Gems?
A:

If you're someone who has vitamin D deficiencies, this is possibly the best product on the market for you. Not only will you get all the vitamin D you need to restore your levels to a normal-high range, but you're also getting essential Omega-3s. All for a low price that's going to drastically be cheaper than any prescription medicine your doctor would prescribe for you. There isn't anything wrong with Solar D Gems, judging from the available information, and we recommend it highly. It's a quality item from a reputable company that's priced its product far below average. What's not to like?