Rhodiola Force 300 Review – Is it Effective?

Rhodiola Force 300 is marketed as a dietary supplement which helps improve overall mental health and stamina. Side benefits include sharpening memory, modulating psychological stress reactions and uplifting the mood.

The product is manufactured by New Chapter, a US based company which markets a variety of vitamins, minerals and herbal supplements based on whole-food complexes. They’re also the same company behind Zyflamend Whole Body.

The product is an extract of the Rhodiola Rosea Root, a plant which has been demonstrated through various clinical trials to have positive effects on the overall well-being, mental fatigue and learning and memory functions. It is relatively new in the U.S, but has been successfully used as an energy booster for decades in the Soviet Union.

The manufacturer claims a whole-food approach is used in the creation of the supplement and that no chemicals or solvents are used in the processing and extraction stages.

Rhodiola Force 300 is a herbal formula based on Rhodiola Rose root extract, a plant believed to work by making serotonin precursors (tryptophan and 5-HTP) more available in the brain. By this, it optimizes the amount of serotonin, dopamine and other mood-related neurotransmitters in the brain.

The manufacturer claims no chemicals or solvents are used during the processing stages, which include the harvesting (after a minimum four-year growth in the forests of the Altai, Siberia), the low-temperature drying and the extraction. Through this process, the plant phytonutrients are preserved and potential benefits optimized.

The producer doesn’t mention any side effects associated to Rhodiola Force 300. It should however be mentioned those commonly associated with Rhodiola Rosea: irritability, insomnia, restlessness and some less likely but more serious ones such as heart palpitations, mood swings or the shakes.

Rhodiola Force 300 is an herbal product that contains Rhodiola Root.

Rhodiola Rosea (also known as Golden Root, Roseroot or Aaron’s Rod) is a common ingredient in many herbal products that are specially created to reduce stress, anxiety, alleviate mood and promote calm and relaxed mind.

Several clinical studies conducted in Russia appear to imply that the use of Rhodiola Rosea helps athletes to perform better by enhancing their physical capabilities and reducing fatigue.

Rhodiola belongs to a class of plant derivatives called adaptogens, which differ from chemical stimulants, such as nicotine, and do not have the same physiological effects. However, its exact mechanisms of action are still under research, although many scientists believe that Rhodiola Rosea works by modifying the dopamine and serotonin levels in the brain.

There are very few side effects associated with the use of this plant. The most common ones include dry mouth, constipation, nausea, headaches, and irritability. It is recommended to talk with your doctor if you are pregnant, nursing, or trying to get pregnant before using this product. It is not recommended to combine Rhodiola Force 300 with prescription medications unless you have your doctor’s approval.

There are customer testimonials online about Rhodiola Force 300. What is being reported includes the following:

5) Precautions of Rhodiola Force 300 Use

Each bottle of Rhodiola Force 300 contains 30 caps. The recommended dose is one capsule per day, so one bottle should be enough for one month of treatment. Based on the overall price per capsule, Rhodiola Force 300 is an average-priced product.

This supplement can be purchased directly from the manufacturer or a number of online retailers. The shipping costs will vary based on your physical location. Some manufacturers may offer free shipping for larger orders.

The daily dosage is one capsule taken 30 minutes before breakfast or more on advice of the health care practitioner.

Rhodiola Force 300 is a herbal dietary supplement based on Rhodiola Rosea root extract.
Although the supplement has not been approved by the FDA and no empirical evidence is provided to support the benefit claims, the producer guarantees the fullest spectrum of beneficial nutrients provided by its special processing method.

There is a list of side effects associated to the Rhodiola extract that consumers should know, even though these side effects are not listed as such for the product undergoing the review. The plant has been extensively researched and successfully used for many years in the Soviet Union, and only recently introduced to the U.S. market. Clinical tests showed a positive therapeutic effect as an anti-depressant. 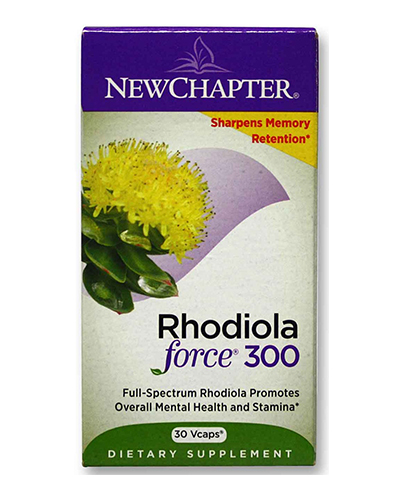 clear
Q:
What does Rhodiola Force 300 contain?
A:

Rhodiola Force 300 has received many positive reviews and testimonials, consumers comparing this product with one of the best mood enhancers available at this moment.

Rhodiola Rosea is a common ingredient in herbal formulas that are specially created to reduce stress, anxiety, alleviate mood and promote calm and relaxed mind; and many consumers have found success in using this ingredient. However, it is important to understand that each is different and so are his needs. Finding the right mixture isn't always a simple task.