Mucuna Pruriens, or velvet bean, has gained increased popularity in western culture with several companies manufacturing mucuna-based supplements. Regardless, not all maintain the purity and potency of the ingredients in the manufacturing process.

Produced by the US company NOW Foods, Dopa Mucuna is advertised as a 100% natural Mucuna-based brain supplement specially created to reduce stress and improve memory, focus, and attention to detail.

Dopa Mucuna is one of the most popular natural supplements produced by NOW Foods, a company that makes a lot of different supplements ranging from herbal remedies and amino acids to complex multivitamin formulas.

Dopa Mucuna’s formulation contains 800mg of a highly potent Mucuna Pruriens seed extract and can help support overall well-being in many ways. If you would like to find out more about this supplement and how you can benefit from taking it, keep reading this article.

Mucuna Pruriens is not a very common ingredient in brain supplements, although the plant has a long history of traditional medicinal use, especially in ayurvedic practices.

Some more recent studies showed that Mucuna Pruriens may aid in the management of Parkinson’s disease and other disorders linked to low dopamine levels because of its dopamine-boosting activity via L-dopa.

Levodopa (L-dopa) is the best-known therapeutic remedy for Parkinson’s. L-dopa has been linked to increased dopamine levels in the brain, so, in theory, the more L-dopa is available, the more dopamine that the body can theoretically produce.

Some recent clinical studies have revealed that Mucuna Pruriens can increase the amount of L-Dopa available in the brain to synthesize dopamine. Because Dopa Mucuna contains a high amount of Mucuna Pruriens seed extract, it may help boost dopamine levels in the body as well.

Dopa Mucuna is a dietary supplement based on an extract of Mucuna Pruriens, which is one of the traditional herbs that have been used for centuries to treat various health concerns including libido and fertility, boost testosterone levels, reduce the detrimental effects of diabetes, and support proper brain health.

Mucuna pruriens is a natural source of Levodopa (L-Dopa), a precursor to the neurotransmitter Dopamine which is essential in the regulation of mood, movement, and cognition. This plant is generally considered to be safe with no serious side effects reported in clinical trials conducted to date and is commonly consumed in ayurvedic practices.

Mucuna Pruriens may help increase dopamine levels in the brain due to its L-Dopa content and prevent symptoms related to low dopamine levels. It may also act as an antioxidant to protect the body from oxidative damage due to free radicals.

Dopa Mucuna has multiple health benefits and can help

Dopa Mucuna only contains natural ingredients and is generally safe for use as recommended.

5) Where to Buy Dopa Mucuna?

The recommended dosage for Dopa Mucuna is one to two capsules taken with a meal, preferably early in the day.

Dopa Mucuna is a 100% natural brain supplement produced by a company with a good track record in the health and wellness industry. The supplement provides mechanisms that support the body’s dopamine production, preventing symptoms like fatigue, emotional disturbances, and addictions that may occur due to an imbalance.

Dopa Mucuna is not intended to diagnose or cure any medical illnesses; however, it may work well to support better brain functioning and overall health and wellbeing, and offer support to people suffering from mood or movement disorders. 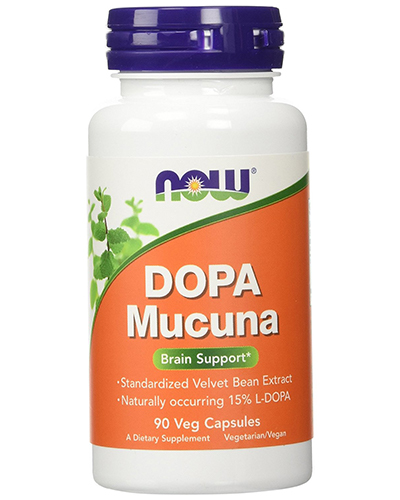 clear
Q:
What does Dopa Mucuna contain?
A:

Q:
Dopa Mucuna is all about what?
A:

Dopa Mucuna is a dietary supplement that helps boost the body's level of Dopamine, a naturally occurring neurotransmitter linked to the well-functioning of mood, memory, motivation, and addictive behavior.

Q:
What are the Dopa Mucuna side effects?
A:

Mucuna pruriens, the key ingredient in Dopa Mucuna, may cause nausea and abdominal discomfort.

Q:
Where can I buy Dopa Mucuna?
A:

Q:
How much does Dopa Mucuna cost?
A:

Q:
Does Dopa Mucuna work?
A:

Q:
Are there any dangerous ingredients in Dopa Mucuna?
A:

Dopa Mucuna only contains natural ingredients and is generally safe for use as recommended.

Q:
How should I take Dopa Mucuna
A:

You should take one to two capsules with a meal, preferably early in the day.

Q:
How do I contact Dopa Mucuna customer service?
A:

Q:
Can I return Dopa Mucuna?
A:

You can return new, unopened products purchased from the company website within 30 days for a full refund.

Q:
What do Dopa Mucuna reviews say?
A:

Dopa Mucuna has over 2,000 5-star reviews on Amazon with customers testifying of its benefits and efficacy in symptom relief.

Q:
Who makes Dopa Mucuna?
A: