Choline Vegan and Non-GMO food supplement support cognitive functions in both men and women. It also boosts the functioning of the central nervous system and cell development. Infants using this supplement gain more strides in health and brain development. Choline works well for pregnant mothers. This is because it increases the levels of choline in the fetus.

By so doing, the chances of the baby having a healthy and sharp brain when born are increased. Choline is also known to reduce chances of having brain anomalies. Nested Naturals the company behind Choline believe that they source the best and natural ingredients available.

1) Choline at a Glance

Choline: works in the same way as the B vitamins complex. They are used to lessen effects associated with depression and memory loss. It controls and prevents seizures from taking place in the brain. It is mostly used by athletes in endurance sports. Pregnant mothers are given this ingredient to prevent neural tube effects. Its other uses include reducing cholesterol levels and controlling asthma.
Plant Cellulose: Cellulose helps in the protection of cells in the body. It can also be utilized by the body as fuel.

The product is good for the development of babies inside the womb, outside the womb, it can be prepared as baby formula. In adults, it keeps the brain sharp and focused. Choline goes a long way in maintaining proper brain health. The presence of choline in the brain aids in memory preservation and fighting other signs of cognitive decline.

The high-quality VitaCholine source Nested Naturals. Choline may help enhance both cognitive function and memory in adults and seniors. It has been linked to support the growth and development of brain cell structures, the central nervous system, and the improved performance of the heart. The company behind the product claim that extensive third party testing has been done to guarantee product quality. Nested Naturals make use of high quality and naturally occurring ingredients that are independently tested for verification. The crucial job that Choline is famous for is its ability to help in nerve functioning, assists in nerve signaling. Brain cell membranes get their nourishments from Choline brain supplement. Choline capsules are made of L + Choline Bitartrate. Although there are similarities between Choline Bitartrate and CDP-choline and GPC choline they are not completely the same.

4) Precautions of Choline Use

Two vegan capsules to be taken every day with water. If you are nursing or pregnant, consult your doctor before use of Choline.

6) Bottom Line – Does It Really Work?

Very few products in the supplements industry are designed to treat the whole family regardless of age. Choline promises to work both from an early stage up to the late stages of life. Its overall brain development and cell membrane protection guarantee the brain functions at its optimum at all stages in life. The most interesting fact about this product is that it is gluten-free, non-GMO, and free from any dairy and animal products. It makes it the most desirable brain food supplement recommended for the whole family. 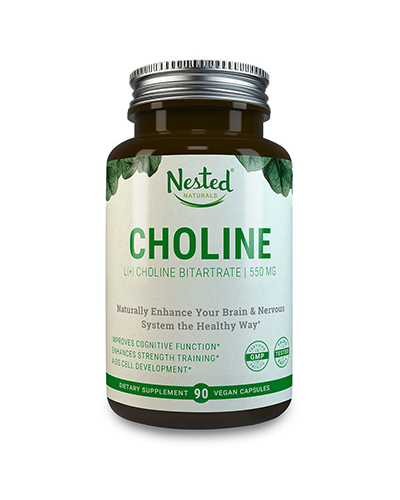