Profiderall is a brain supplement that focuses on enhancing brain boosting effects to function in memory, learning, and concentration to improve your memory, sharpen your focus as well as boosting your overall mental performance. The company that produces Profiderall supplement is Profiderall Laboratories that has its headquarters located in San Francisco and involving in manufacturing many smart drugs to improve brain activity and mental energy.

Profiderall consists of unique nootropics combinations that promise brain-boosting impacts to give the best brain outputs. The producer claims that ingredients in Profiderall formula equipped the brain with vital neurochemicals that enhance nutrients and blood circulation to the brain. Profiderall supplement has been claimed to help college students and professionals to focus, concentrate and improve their work and school performances. The formula can be purchased directly from the manufacturer’s website with money back guarantee.

Profiderall’s effectiveness is as a result of its blend of synthetic and natural ingredients. The focus of the formula is to improve memory, replenishes the body with energy, enhances cognitive functions and stimulates your brain to perform optimally.

The Profiderall has long and complex ingredients list that make it effective for brain power. Some of these vital ingredients will be looked into for more enlightenment. Picamilon in the Profiderall formula delivers GABA neurotransmitter in the brain when it is combined with niacin to boost cognitive functions by increasing oxygen and blood flow to the brain. There are pieces of evidence to back up enhancing-power claims of picamilon ingredient in the Profiderall. A study by a Russian shows that increased flow of blood of cerebral from picamilon can boost specific neurologic symptoms.

Besides picamilon, Profiderall also contains some other key ingredients for neurological health such as amino acid which contains L-tyrosine and L-taurine which are essential for healthy brain performance and enhances focus. Profiderall also contains DMAE Bitartrate, Vinpocetine, Huperzine A, chlorine, vitamin blends, Tyrosine, as well as Caffeine in its purest form which has been researched to trigger your nervous system and reduce overall fatigue.

4) What You Need to Know Before Taking Profiderall

Considering its effectiveness in improving memory, mental performance, sharpening concentration and boosting brain energy, Profiderall is promised to be beneficial and effective for cognitive functions. Though some claims are not confirmed, since no clinical tests have been carried out to substantiate the claims of the manufacturer.

However, from its ingredients compositions, which are associated with improved brain and memory functions, Profiderall poses that it may be effective in a real sense.

Though the supplement is safe, natural and FDA approved, yet, it is necessary and advisable to look for more details about the formula or better consult your doctor before taking it. Because of the presence of stimulant such as caffeine as part of its ingredients, care must be taken as caffeine in its excess may have negative effects on some individuals. However, if you are involved in some special cognitive assignment and you want to enhance your productivities by boosting your brain energy, Profiderall worth it. 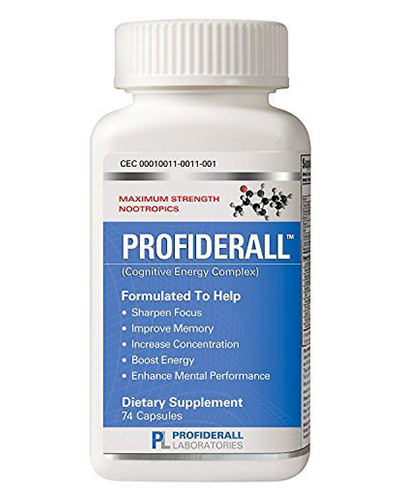