Mental Master Review – 8 Things You May Not Know

Mental Master is a dietary supplement in the form of a tincture formulation that supports healthy cognitive function, focus and memory. L.A. Naturals, the company that manufactures the formula, does not detail the formula’s specific ailment claims. However, as the majority of supplements which use Ginkgo Biloba extracts, it works by increasing blood flow to the brain, thus the oxygen levels which determines enhanced mental clarity, focus, and memory.

L.A. Naturals is a manufacturer of liquid herbal extracts using high-quality ingredients made from herbs that are certified organic, ethically wild-harvested or selectively imported. The herbal ingredients are pesticides and genetically modified organisms free.

Mental Master is recommended for adults, except pregnant and nursing women who are advised not to use the formula. Additionally this is a Kosher certified vegetarian formula.

1) Mental Master at a Glance

Mental Master is a herbal tincture consisting of a proprietary blend of 6 botanical ingredients. The most important and popular ingredients are the Ginkgo Biloba, Gotu Kola and Rhodiola Rosea.

Gotu Kola has been used by Ayurvedic medicine practitioners for thousands of years. In modern times, it is known for its cerebral tonic and circulatory stimulant properties. It is used to improve memory and cognitive functioning and is believed to have nootropic effects. A study conducted in 2008 on mice actually showed that Gotu Kola may protect the cells in the hippocampus, an area of the brain responsible for long term and short term memory, hence possibly making it effective in age related memory decline conditions such as Alzheimer’s. Side effects of Gotu Kola are rare and usually occur in high doses (headache, upset stomach, nausea and dizziness).

Rhodiola Rosea possesses strong adaptogenic and antioxidant properties and has been traditionally used by Eastern European and Asian countries. Its precise mechanism of action is yet unknown; however, it’s beneficial effects are attributed to its potential influence on neurotransmitters such as Dopamine or Norepinephrine. Today it is used to promote energy boost, stamina and physical strength (athletic performance), and to relieve anxiety and depression.

3) Is Mental Master Right for You?

Ginkgo Biloba is a very popular herb used in brain supplements nowadays due to its demonstrated positive effects on the vascular system. It is believed that Ginkgo Biloba extracts might help improve oxygen levels in the brain, thus improving mental clarity and other brain functions. Many studies and clinical trials have been trying to prove Ginkgo Biloba’ efficacy. However, most of those studies came upon different results.

Gotu Kola can act as a cerebral tonic and like Ginkgo Biloba, as a circulatory stimulant. This herb may be a promising anxiolytic agent in the future, due to the belief that it can be useful in the treatment of anxiety. However, extensive research is needed to prove its Effectiveness considering this matter. Several scientific reports have documented Gotu Kola’s ability to aid wound healing. Also, preliminary evidence suggests that it may have nootropic effects. This ability helps revitalize the brain and nervous system, increase attention span and concentration. Gotu Kola also has antioxidant properties.

Green Tea shows potential anticancer capacities; however, extensive research is needed to prove its efficacy in this field. Excessive intake of green tea extracts containing caffeine might lead to undesirable side effects. Rhodiola root has a reputation for stimulating the nervous system, fighting depression, enhancing work performance and decreasing fatigue. Russians have drank Rhodiola tea for centuries as an energy booster. Russian and Chinese scientists have researched the benefits of the root for several decades and have categorized it as an adaptogen due to its observed ability to increase resistance to a variety of chemical, biological and physical stressors.

5) What You Need to Know Before Taking Mental Master

6) How Much Does Mental Master Cost?

Mental Master is an average priced supplement designed to last a month is the daily recommended dosage is not exceeded. The product is available for purchase on the manufacturer’s website or from various online retailers.

7) How to Use Mental Master

The manufacturer recommends taking 20-40 drops of Mental Master in juice or water, 2-3 times daily, or as needed. Product reviews are few in number but consumers report being satisfied with the formula.

8) Our Verdict on Mental Master

Mental Master, like a vast number of other herbal supplements designed to enhance mental performance, includes herbs which work to enhance blood flow to the brain (and hence increase memory, focus, and other cognitive function parameters performance) and herbs which act as a brain tonic and which energize the mind which results in increased alertness and focus.

Taken separately, these herbs have been proven effective to various extents even though some benefit areas are still controversial. The formula as such has not been tested, but consumers claim to be satisfied and to notice favorable results.

Hence, we may say the formula is likely to work for some consumers. However, as always, we recommend caution and advise you to seek specialized advice before starting use. 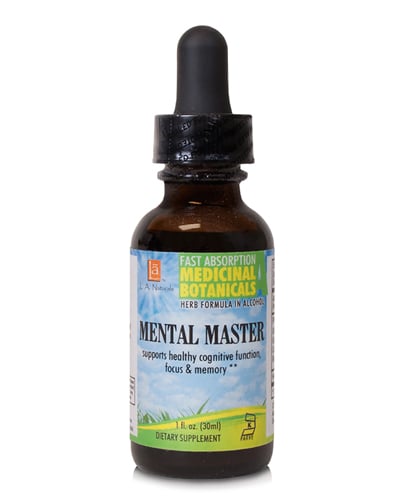 clear
Q:
What does Mental Master contain?
A:

Q:
What is Mental Master supplement?
A:

L.A. Naturals Kosher Mental Master is advertised as a herb blend aiming to improve memory, focus and healthy cognitive functions. L.A. Naturals Kosher Mental Master is brought to you by Palko Distributing Co. Inc. The main active ingredients are reliable herbs that come with good results in this area of natural medicine such as Ginkgo Biloba, Gotu Kola, Licorice, Rhodiola, Codonopsis and Green Tea. It is believe that this blend might aid people suffering from Alzheimer's.

Similar to other herbal brain supplements, Mental Master includes herbs that have an energizing effect on the body such as Green Tea and Rhodiola root and also herbs that aid the circulatory system, like Ginkgo Biloba and Gotu Kola due to the belief that increased oxygen levels in the brain help improve mental clarity and memory. Although, taken separately these plants have the potential to aid mental functions, most of the studies performed to demonstrate this capacity remain inconclusive or have reached different results.

Most consumers seem to be pleased with the results they got when using a supplement containing these herbs; however, the formula needed by different people varies and its Effectiveness is not guaranteed.

after i used this i started just feeling healthier. the doctor sais that my circulation got better even tho i can’t know how true is that. i know only that i feel younger and better!