PurALC is designed as an Acetyl-l-carnitine supplement of the highest quality and purity that offers numerous brain and health benefits and supports normal energy levels. The company behind this formula is a large USA manufacturer of dietary supplements called Stop Aging Now. They offer numerous such products based on different ingredients and nutrients combinations differentiated after the health issues, organs, or systems that they are targeted for (e.g. immunity and digestive formulations, heart and brain supplements, or Omega-3 based products).

PurALC features a patented form of the Acetyl-l-carnitine amino acid claimed as a high potency and purity supplement. This form is called Carnipure ALC and contains the highest L-carnitine concentration of any other non-hygroscopic salt form. It is also claimed as the natural form of the amino-acid, making it easily absorbable and safe for the use of humans.

PurALC is offered for adults except those already under medication or pregnant/nursing women who don’t have the consent of a healthcare practitioner. It is claimed as an adequate brain support as well as an energy booster effective in supporting a healthy lifestyle and body functioning. The product comes in a easy to swallow vegetable capsule form that lacks any common allergenic substances, artificial colors or preservatives

PurALC formula is offered as a potent source of a natural amino-acid essential for energy metabolism, healthy heart and brain. The main food source of this amino-acid is meat, particularly red meat. It has been shown that due to a decrease in red meat consumption in the last decade, the levels of ALCAR have decreased considerably. More so, this chemical is also known to decrease with age, leading to mental and physical fatigue, as well as numerous other health conditions that come with a prolonged deficiency of Acetyl-l carnitine.

The chemical is considered a powerful antioxidant able to offer a strong defense against free radicals. Thus, the substance provides a much needed support against age-related brain cell deterioration. This has led many researchers to start looking at ALCAR supplementation as a possible treatment of brain related conditions, including Alzheimer’s and Parkinson’s usually associated with a severe cognitive decline.
Acetyl-l-Carnitine is considered more bio-available than L-carnitine, which is why it is such a popular supplement in both brain and body-building supplements. It has been shown that the chemical is able to effectively support healthy mitochondria in all human cells, including brain cells, making it a recommended enhancer of both mental and physical energy levels.

ALCAR is considered likely safe in doses of up to 2,000 mg per day. This is considered the maximum necessary amount that can be safely taken by healthy people on a regular basis, without risking endangering their health. Mild side effects have been reported when using too much Acetyl-l- Carnitine including nausea, digestive problems, or headaches. People suffering from seizure-like conditions should be aware that such supplements may increase the risk of having such an episode.

Acetyl-L-carnitine (ALCAR) is an acetylated form of L-carnitine and is a chemical naturally produced in the body. It is also commonly prescribed as a dietary supplement. This substance is broken down to Carnitine, an essential nutrient for the transportation of fatty acids into the mitochondria. These cells are responsible for energy production by using fatty acids as fuel. Without proper Carnitine levels, the energy production is ineffective, and eventually, the body is unable to support the daily energy requirements. This is why Acetyl-l Carnitine’s energy enhancing benefits make it a suitable ingredient of numerous sports nutrition supplements. ALCAR’s other benefits come from its antioxidant properties. Its neuroprotective properties have made it a highly recommended alternative medicine treatment of dementia, Alzheimer’s, and Parkinson’s disease. Numerous clinical studies were initiated to determine the extent of the chemical’s benefits in people suffering from age-related memory impairment and mood disorders with positive, but yet unconvincing results.

This supplement may, however, cause unwanted side effects that include allergic reactions (skin rash), nausea, vomiting, or diarrhea. ALCAR has also been shown to interact with certain drugs like blood thinning medication. Special precautions should be taken by all those who are already under any medication.

Besides those posted on the official page of the manufacturer, PurALC reviews are unavailable at the time this review is drafted. The testimonials posted on the presentation site include: PurALC Acetyl-L-Carnitine has noticeably helped the nerve function in my fingers and toes. It’s so nice to have a normal feeling in my feet. Your price was also the lowest I’ve found. Can’t beat that, as well as the satisfying results!/ After taking your PurALC Acetyl-L-Carnitine for just a few days, I started feeling like I did when I was a teenager!/ Taking the Brain Energizer along with PurALC helps me keep my cognitive abilities sharp while pursuing my daily activities.

PurALC dosage is one vegetable capsule per day, preferably taken with food.

PurALC is sold in bottles of 30 capsules, which provide the necessary month’s supply if the recommended dose is not exceeded. The monthly dosage standard price is relatively low, but can be even more reduced by entering in the Auto-ship program offered by the company or by purchasing multiple bottles at once (3 or 6 are the available options).
The formula benefits from the 365 money-back guarantee offered by Stop Aging Now as a guarantee for quality. Shipping and handling taxes fall under the consumer’s obligation. Online purchasing is also secured by the manufacturer using specific software (indicated by the producer on its site).

PurALC features a safe amount of ALCAR which is 500 mg per serving. The suggested dose is 1 capsule per day.

PurALC is a standard ALCAR based formulation that has the advantage of containing a single active ingredient that is researched and proven safe and effective in numerous clinical studies. The formula does not come at an expensive price. On the contrary the monthly price is somewhere in the low range among similar formulations which may be looked at as a major advantage from the consumer’s point of view.

However, a major disadvantage would be that at this moment there are no testimonials to support this product’s claimed benefits. The only reviews available are those found on the official page under the section “Read reviews”, but it is normal to assume that they all support the product’s effectiveness.

In conclusion, although this may be a top-quality formula, it is recommended to keep in mind several essential facts such as the lack of appropriate scientific evaluation (including an FDA approval), the insufficient evidence of the formula’s effectiveness, and of course the potential adverse reactions and drug interactions that may occur when used inappropriately. This is why we strongly recommend informing a specialized practitioner before using such a supplement. 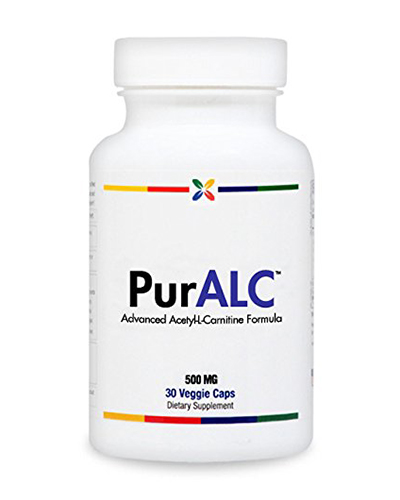 clear
Q:
What are the core ingredients in PurALC?
A:

Q:
PurALC is all about what?
A:

PurALC is a nutritional supplement advertised to include a highly bio-available and proven effective form of Acetyl-l-carnitine needed for a healthy heart and brain, and optimal energy production. This is one of the numerous products offered by Stop Aging Now as part of their brain supplements line. The formula contains 500 mg of Carnipure, a clinically researched compound that is marketed to contain the highest concentration of ALCAR as compared to any currently available similar formulation. The results of the research involving this patented form are available for online consultation. ALCAR is one of the main substances needed by the mitochondria to produce energy and is also a potent antioxidant. The supplemental form is often recommended for increasing physical and mental performance, as well as reducing symptoms of cognitive decline in the elderly.

PurALC nutritional formula is based on a single active substance which is an important amino-acid for the overall health. The key substance is included as a patented form of Acetyl-l-carnitine named Carnipure. This is a trademark of a Swedish company named Lonza, a manufacturer with a long history in various industries, more recently involved in the development biopharmaceutical formulations. Thes supplement is advertised to offer a high-quality form of natural L-carnitine and is the subject of numerous clinical trials. The results of such trials can be consulted online, as well as all the necessary information needed for full information about this unique compound.

PurALC is advertised as one of the best sources of Acetyl-l-carnitine. Like all the formulations offered by this producer, the formula is claimed as manufactured in GMP certified and FDA inspected manufacturing facilities and following the strictest guidelines set by USP.

This product has helped me regain my energy I thought I lost forever. I no longer feel sleepy all day, and I am capable to finish my daily activities much faster. And the best thing is that is all seems effortless. I definitely recommend this high-quality product for those who have this type of problem. It works!

PurALC is excellent for my memory and my energy levels. It does exactly what the manufacturer says, in a very short period of time. If I use it daily, I am able to do my work without much effort. When I stop taking the capsules for a few days, I feel less alert and productive, and I get tired faster. I simply love this formula!