PuraEPA is a fish oil supplement advertised as an effective product in enhancing the overall cognitive function. The manufacturer claims this to be the best EPA supplement available at this moment.
This formula is offered by Mind 1st Ltd., a small pharmaceutical company founded in 2003. They are located in Preston, United Kingdom.
According to the manufacturer, this formula contains ultra-pure EPA and no other omega-3 fatty acids such as DHA (docosahexaenoic acid). They also claim a formulation that contains more EPA will be more efficient as a long-term treatment.
All Mind 1st Ltd. products are offered with a satisfaction guarantee policy. Consumers who are not entirely satisfied with their purchase can return the product for a full refund. Please note that shipping costs are not refundable.

PuraEPA is a dietary supplement that contains a strong concentration of pure Omega-3 EPA fish oil. The producing company claims this formula to be effective in boosting the immune system, enhancing mood, helping with focus and concentration, improving vision, rejuvenating skin and assisting with cardiovascular health.

It appears that unlike other Omega-3-based supplements, PuraEPA only contains a high concentration of EPA and no Omega-3 DHA. The manufacturer explains this decision by offering some clinical studies to show that EPA is more effective and a better long-term solution than DHA.

Several clinical studies have suggested that patients with certain circulatory problems (varicose veins for example) may benefit from the consumption of these two Omega-3 acids. There is evidence that indicates that EPA is effective in stimulating blood circulation.

It is important to note that the human body well tolerates all Omega-3 acids. In some very rare situations (when consumed in excess for instance), EPA has been associated with some side effects such as hemorrhagic stroke, increased the incidence of bleeding or reduced glycemic control among people with diabetes.

It is also important to point out that Omega-3 fatty acids alone cannot act as a miraculous cure. It is strongly recommended to consume them in association with a healthy diet and lifestyle.

3) How Much Does PuraEPA Cost?

Each bottle of PuraEPA contains 60 capsules, which should be enough for up to 15 days of treatment for the average user. That means a patient will require two bottles of this product for a full month of therapy.

Compared with other similar products, PuraEPA is an average-priced supplement. The product can be purchased directly from the manufacturer (the company may offer some discounts) or from several online retailers. The shipping costs will vary based on your physical location.

While this product is advertised as the best EPA supplement available on the market, the lack of testimonials and positive reviews is a reason for concern.

The formula appears to have the meanings to be a reliable, effective Omega-3 fish oil supplement but we advise our readers to research further into this type of products before making a final decision.

Many consumers have found benefits in using Omega-3 fatty acids, but it is important to note that each is different and the results may be different as well. 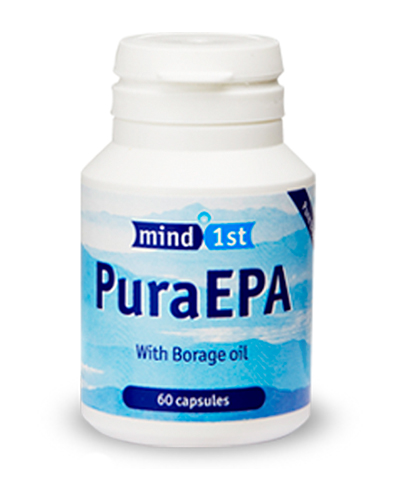 I have personally used this product for over ten years. I have eventually come off my anti-depressants using it!!!!! It is a good product.

Title for your comment
It is a good product
Have you tried this product?
Yes
Reply