Phosphatidyl Serine is a chemical naturally found in the human body and certain foods like soy and mackerel. This product, offered by Chicago-based Carlson Labs, is derived from sunflower oil. It’s a simple supplement containing 100 mg of phosphatidyl and doesn’t have much in the way of filler ingredients, unlike many brain-boosting supplements containing phosphatidyl. You know exactly what you get just by reading the label.

Carlson Labs has created hundreds of high-quality products since 1965. They seem to focus a lot on quality and delivering results to their customers. One of the things that makes them different is their apparent dedication to information. Their site has a vast amount of things to read, from coursework to recipe ideas and PDF booklets containing research.

1) What is Phosphatidyl Serine?

Although phosphatidyl is often lauded for its benefits in fighting age-related memory loss, and its applications for Alzheimer’s disease, its effects have also been studied in athletes. In general it can improve performance through decreasing the chance of muscle damage, improving the body’s resistance to stress, and promoting a desired hormone balance.

3) Is Phosphatidyl Serine Right for You?

Phosphatidyl is a chemical naturally found in your body, although much of your body’s needs are fulfilled from foods. Phosphatidyl-based supplements are often made from cabbage or soy and it’s key in maintaining cellular function. Phosphatidyl is especially useful in the brain, where it’s used to improve mental function. If taken in doses over 300 mg, some people report upset stomach and insomnia, but there don’t tend to be side effects. Each soft gel capsule of Phosphatidyl Serine only contains 100 mg so it’s definitely safe.

According to Carlson Labs, Phosphatidyl Serine promotes inter-cellular communication in the brain and aids the neurotransmitters involved in learning, memory, and mood. Studies on show that it seems to improve language skills, memory, and attention for people at risk of suffering from age-related mental decline. It also improves some symptoms of Alzheimer’s disease, and is most effective in people with less severe effects. Newer versions of phosphatidyl are still undergoing testing and they appear to have the same benefits. There’s some evidence for other benefits as well, such as improving depression and improving athletic performance, but more research needs to be done to verify these.

All in all, Phosphatidyl Serine might just give you the type of mental boost you need. It can work in people of all ages, although most research has been about its effects on the elderly, who tend to need medication to improve mental performance because of age and cognitive decline. If you’re currently taking prescription medicine, you should consult a doctor before taking phosphatidyl, since it can interact with other medications in unpleasant ways.

Each bottle nets you about a month’s supply, so it’s a little expensive compared to other Carlson products, but for a cognitive enhancement supplement Phosphatidyl Serine is on the inexpensive side. Other brands who use phosphatidyl tend to have much higher prices and a less pure formula which often includes filler ingredients.

Deterioration from over-training can be lessened or eliminated with varying amounts of phosphatidyl. Recent studies have shown that it can enhance mood in people who are stressed, and improve accuracy among golfers when teeing off. More research is being done into phosphatidyl’s benefits related to sports nutrition, and so far it’s very positive. Aside from athletes, Phosphatidyl Serine shows promising results, especially in in older people who might be prone to experiencing age-related memory loss. It’s also noticeable for having positive effects in every age group from a variety of backgrounds.

8) Our Final Take On Phosphatidyl Serine

Carlson Labs says on their website that Phosphatidyl Serine promotes inter-cellular communication in the brain and aids the neurotransmitters involved in learning, memory, and mood. Almost all reviewers agree with this, saying phosphatidyl has done it’s promised to boost cognitive function. People of all ages have noted an increase in mental performance, including memory and focus. They do report needing different amounts, as is common with many types of supplements. Buying from Carlson Labs is also a safe bet because of their long history working with supplements and fish oils. They have a solid reputation for having reasonably priced products with a high level of quality. 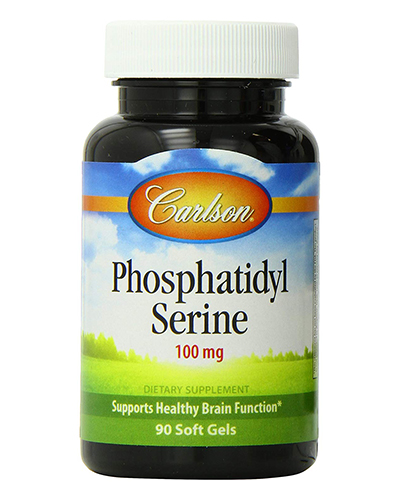 clear
Q:
What are the Phosphatidyl Serine ingredients?
A:

One reviewer reported that it took a few days to feel the effects. Another said they started to see results within two days. This might be due to different levels of doses, and most reviewers say that yes phosphatidyl is effective. Almost everyone who takes it reports better cognitive function and improved memory and focus. It could also be effective with stress levels and cortisol, and no one mentions side effects. If 100 mg a day doesn't work for you, you can increase the dose – some reported taking 500 mg or more every day. Overall people recommend Phosphatidyl Serine highly, saying that it's long-lasting and works just as described.