Pexeva Review – 8 Things You Should Know Before You Buy

Pexeva is a prescription medication designed to assist in the ailment of several psychiatric conditions as follows: major depressive disorder (MDD), generalized anxiety disorder (GAD), panic disorder, and obsessive compulsive disorder (OCD). The formula is developed by Noven Pharmaceuticals and sold through its specialty pharmaceuticals marketing and sales company. The company is specialized in researching, developing, manufacturing and marketing prescription drugs. Their range of products includes products like Minivelle (the smallest estrogen patch), Daytrana (the first and single patch approved for the treatment of ADHD), and Brisdelle (the first and only FDA approved non-hormonal treatment of hot flashes).

Pexeva comes in 4 different concentration options (10, 20, 30, and 40 mg) and is claimed as an approved drug for adults. This formula is part of the antidepressant class of drugs. The risk of suicidal thinking and behavior is one of the main concerns with this kind of medication. The most affected are children, teens, and young adults, so in these cases a close monitoring is advised.

This product is not recommended to those who suffer from allergies to any of the Pexeva ingredients, are under MAOI drugs (have used or are about to start a treatment in less than 2 weeks), or under several other drugs (Mellaril, Paxil, Orap or products based on the same active substances).

Pexeva is a product advertised to reduce symptoms associated with depression and other psychiatric conditions. The active substance in this drug is paroxetine mesylate. This is classified as a selective Serotonin reuptake inhibitor (SSRI) that acts by restoring proper levels of neurotransmitters in the brain. In this case, the substance regulates the production of Serotonin, a chemical known to influence the brain’s ability to react to stress, sleeping patterns, and mood. Paroxetine has been associated with the following beneficial effects: improved mood, sleep, and appetite, increased energy levels, and decreased anxiety and panic attacks, compulsions, and obsessions.

Self-administration of this drug is not recommended. Anyone who is interested or is prescribed such a medication should inform his physician about any pre-existing medical condition (including kidney, heart or liver conditions, diabetes, high blood pressure, seizures, glaucoma, bi-polar disorder, and others.) Pregnant women should avoid using antidepressants due to existing evidence of increased possibility of severe malfunctions in fetuses (particularly on the heart).

The product may interact with anti-inflammatory drugs and cancer medication. Pexeva side effects include nausea, increased anxiety, inability to sleep, weakness, sweating, shaking, constipation, and other symptoms. It is not recommended to suddenly discontinue the product (the SSRI discontinuation syndrome is highly possible to occur).

3) Does Pexeva Work and it is Safe?

Pexeva falls into a class of medications known as SSRIs (Selective Serotonin Reuptake Inhibitor). This form of medication is usually prescribed to patients who suffer from severe depression, bipolar disorder, OCD or severe anxiety disorder. This type of medicine is believed to help balance the levels of chemicals that are produced in the brain. However, its primary focus is on controlling the serotonin levels that are responsible for mood imbalance.

The manufacturer has conducted several clinical studies to prove the effectiveness of Pexava. According to them, when used to treat major depressive disorder, this formula was significantly better than placebo in improvement of sub-factor scores of the Hamilton Depression Rating Scale, including the depressed mood item, sleep disturbance factor and anxiety factor. Paxeva reviews are available online. What is being said includes: I’ve been taking this for several years now, and it is still as effective for my depression / Helps me cope with the everyday stress I am facing at work. I have experienced minimal side effects such as drowsiness, and occasional yawning / I can keep my anxiety under control with this drug.

5) What You Need to Know Before Taking Pexeva

6) How Much Does Pexeva Cost?

Pexeva is one of the most expensive SSRIs on the market today. Unfortunately, there isn’t a cheaper generic version either. Many insurance programs and prescription coverage plans will pay for this form of medication. A patient will have to check with their specific provider to find out what is offered.

Do not purchase Pexeva from questionable sources. Always talk with your doctor first. If you cannot afford the treatment, it is important to discuss that with your doctor. He may be able to offer you alternative treatments.

Pexeva is a traditional SSRI antidepressant. It is based on the therapeutic effects of a single active substance. The product is offered by a reputable company dedicated to producing prescription drugs based on science and elaborate research.

The drug is recommended only for people who were diagnosed with certain conditions by a specialized healthcare professional. If any negative effect is noticed, the patient is advised to seek immediate medical advice. An increased risk of developing suicidal thoughts has also been reported in a large number of patients. If such a behavior is noticed in a person who is under such medication, a physician should be informed immediately. The product may also impair with one’s ability to function (drive, operate machinery), think clearly or react normally due to side effects like drowsiness and sleepiness.

For safety reasons, any concerns or abnormalities noticed during the treatment should be immediately communicated to the supervising physician. 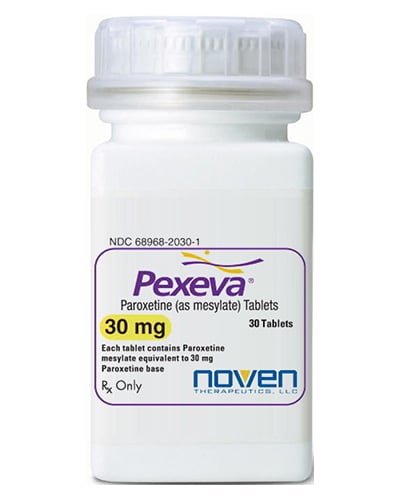 clear
Q:
What are the core ingredients in Pexeva?
A:

Pexeva (Paroxetine Mesylatev) is a selective serotonin reuptake inhibitor and so it is one of the substances that are effective in improving Serotonin  (essential brain neurotransmitter) levels in the brain. Pexeva can only be taken as prescribed by the doctor and is recommended in the treatment of four medical conditions: OCD (obsessive compulsive disorder), GAD (generalized anxiety disorder), MDD (major depressive disorder) and panic disorder. The main Pexeva ingredient is paroxetine mesylate. Pexeva reviews are generally positive, with consumers testifying to the formula's effectiveness in the areas advertised by the manufacturer.

Pexeva side effects and precautions may be summed up in a rather extensive list, therefore it is essential to discuss it with your healthcare provider prior to using this treatment.

Pexeva has been approved as a form of treatment for major depressive disorder (MDD), obsessive compulsive disorder (OCD), panic disorder (PD), and generalized anxiety disorder (GAD) in adults. However, this is a form of prescription medication, and it should not be purchased or used without a doctor's consent. The core Paxeva ingredient is a substance researched and credited for benefits including improved sleep, restored appetite, higher energy levels, better mood and other benefits.

It is important to point out that depression is a serious medical condition that in some people can lead to suicidal thoughts. As with any medication, there are benefits and risks associated with the use of Pexeva. Discussing these with your doctor is important.

I have been using Pexeva daily for the past year. I only recently understood its actual value, when I ran out of them for a few days. All my old sleepless nights and anxious feelings, irritability and negative thoughts came back. I am so happy I have found these pills and grateful that I can get relief from my disease.

I was experiencing an ugly depression accompanied by anxiety and after taking this drug (at the recommendation of my healthcare practitioner) I started gradually feeling better. Now, I am under treatment and I’ve had zero anxiety episodes in 6 months. I am rather pleased and I consider the weight gain to be a minimal side effect as compared to the benefits.

Approximately seven years ago I was prescribed Pexeva by my Doctor for Depression. We had tried other AntiDepression meds, but Pexeva turned out to be THE medication that worked. I continued with Pexeva for four or five years, until I could no longer afford to pay the high cost. I switched to Paxil, but it has never worked as well. At this time, I have suffered losses in my life, and find that I am suffering a prolonged and deepening Depression again. My Doctor has increased the dosage of Paxil, but it doesn’t seem to be working. I have considered trying Pexeva again, but for the high cost. I would welcome any comments, but at this time, I am without a computer.