Weber & Weber Petadolex Review – 8 Things You May Not Know

Petadolex is an herbal remedy advertised as effective for maintaining neurological health and promoting healthier blood vessel flow in the brain. The formula is offered by the company Weber& Weber. Additional information about this company is not available at the time of this review unfortunately.

The formula is advertised as the only brand of butterbur (Petadolex’s active substance) approved by the Canadian department of national public health (Health Canada). The Petadolex Butterbur core extract is also a researched natural substance, with an exclusive PA (pyrrolizidine alkaloids) free formulation. The 75 mg concentrate is recommended for adults, while the 50 mg concentrate is ideal for children over 10 years old and adults. The product comes in an easy to swallow gel-capsule form.

The supplement is advertised as a clinically tested product for migraines, although a clear source where clinical trials can be accessed is not indicated. The official source states that a clinical study showed that 71% of the participants in a study involving the product reported considerable reduction (about 50% less intense) in migraine attacks. The formula is claimed to have a fast acting effect without causing the unwanted side effects of other treatments (triptans, beta blockers, anticonvulsants or antipsychotics).

Petadolex is promoted as the world’s only 75 mg Butterbur Gelcaps, prescribed by a large number of Europeans neurologists since 1972. It is claimed as the only butterbur extract that uses a patented refining process guaranteed to deliver the highest potency combination of active substances.

Petadolex features a single key ingredient, the extract of Butterbur root. The herb is used to treat a broad range of affections including stomach affections (ulcers), migraines, anxiety, insomnia, asthma, allergic rhinitis, cough, irritable bladder, and plague. The main concern with the use of this plant is the high concentration of Pas, chemicals known to actually cause damage to the liver. The effectiveness of this extract has only been proven clinically in the treatment of migraines and hay fever caused by grass pollen. However, current evidence indicates the benefits of a certain Butterbur extract are noticeable exclusively in the case of the administration of daily doses of 150 mg for a period of 16 weeks. The research refering to the Weber & Weber formula showed that the product managed to reduce the frequency of migraine attacks by almost half, in both adults and children.

The safety of supplements that contain the extract is a very controversial issue. There is a great debate over its potentially the harmful side effects caused by the presence of pyrrolizidine alkaloids to the liver, lungs, and blood circulation which may increase the risk of developing cancer. PAs may also cause birth defects and are not recommended for pregnant women.

However, Weber& Weber’s formula is claimed as free of such substances and Butterbur products free of Pas have been shown to be generally well tolerated by consumers. The common side effects are mild in severity and include belching, upset stomach, allergic reactions, fatigue, and drowsiness. The drowsiness effect is considerably reduced as compared to similar medication. Petadolex side effects are not mentioned by the manufacturer.

Petadolex ingredients list features a single extract of butterbur. The manufacturer states that this product is highly effective in treating migraine headaches. Butterbur appears to be the key ingredient in this formulation. Native Americans have used the plant as a remedy for a headache and inflammation. Some species of this plant contain the chemicals isopetasin and petasin, which are believed to have potential anti-inflammatory benefits in treating headache. Recent studies have shown that the highest concentration of these two compounds occurs in Butterbur root. Butterbur root extract has been reported to be effective in reducing the occurrence and severity of migraine headaches, although evidence is still required to support this benefit from a scientific point of view.

There have been some studies conducted within the United States that show positive results for the use of this product. Sadly the manufacturer doesn’t go into detail regarding these studies. There are testimonials about Petadolex posted online. What is being reported includes the following:

One bottle of Petadolex contains 60 capsules, which should be enough for one month of treatment for the average user. This is an average-priced supplement. Please note that Petadolex is cheaper than similar prescription drugs available on the market. Still, it appears that the formula has been discontinued and hence limited stocks of this formula are available with various retailers.

The suggested dose is 1-3 capsules daily depending on the concentration of the product. Children are advised to take 1-2 capsules per day with meals. Pregnant and nursing women are forbidden to use the product in treating migraines.Petadolex reviews seem to be reduced in number, but generally positive.

Petadolex is advertised as a nonprescription formulation effective in the alleviation of migraine symptoms. The formula was developed in the 70’s and is a patented product in the USA. It is claimed to contain none of the common allergens: egg, milk, gluten, tree nuts, fish or shellfish, and wheat. However, people with allergies to ragweed, marigolds, daisies or similar plants, should know that such reactions may also be caused by the Butterbur.

The formula is advertised as one of the most popular products recommended by physicians. However, this claim cannot be validated. Similar products are available on the market. One of the most important competitors seems to be Enzymatic Therapy Petadolex, which has received very good reviews form a large number of consumers.

However, Weber& Weber’s supplement seems to be the only such supplement that was scientifically demonstrated to be effective in reducing the number of migraines. It is important to mention that these are the results of a reduced number of clinical studies and additional research is required to determine all the safety issues implied by the use of the product. 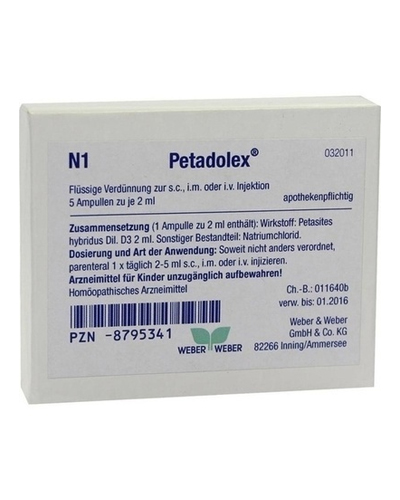 clear
Q:
What are the core ingredients in Petadolex?
A:

Q:
What is Petadolex?
A:

Petadolex is a dietary supplement based on a patented extract of butterbur - a plant which was many times studied for its effects on blood circulation and benefits that derive from it. The formula is manufactured by Weber and Weber. The formula works by improving blood flow in the brain, thus relieving pain caused by headaches and migraines. The herbal extract is known to contain petasin as key active ingredient, a chemical compound found in the Petasites genus. Petasin is accounted for the anti-inflammatory effects of butterbur, at least partially. Petadolex Butterbur is claimed to be superior to other forms of butterbur, however we were not able to find official information to back-up this claim. Petadolex reviews are available, and mention that the formula has been discontinued.  Petadolex side effects are limited because the product includes no PAs - pyrrolizidine alkaloids - substances that affect the liver.

Petadolex has received some positive reviews and testimonials, which is always a good thing. The formula behind this product is simple, with a single important ingredient. The formula is well tolerated (being recommended to both children and adults), but please keep in mind that minor side effects may occur. The information provided by the manufacturer is somehow incomplete, and therefore we advise our readers to research further into this formula before making a final decision. Plus the fact that an official information website is not available which is an important downside of the formula.