Cyruta is advertised by its makers as a homeopathic remedy capable to support healthy levels of cholesterol that are already on proper values. In addition, it is claimed to offer peripheral circulation support as well as improvement when it comes to cellular glucose handling. The business called Standard Process is the one behind this remedy.

By possessing a vast background on the nutritional market, Standard Process is in fact a business first established in 1929 that has released more than three hundred products by now. Some of these are the stress-relief supplement Standard Process Drenamin and the whole foods supplement Catalyn.

A particular feature of this company in comparison to others the division of its releases into three product lines which are Standard Process whole food supplements, MedHerb, and Standard Process Veterinary Formulas. Nowadays, their field of influence expands from condition-specific formulas to herbal remedies capable of providing nutritional support.

Cyruta contains a proprietary blend in combination with the positive effects of Vitamin C. The main ingredient of this blend is Buckwheat, or Fagopyrum esculentum, typically regarded as a food due to the fact that it’s not among the cereal grasses, but the herbaceous plants.

This formulation mainly focuses on improving the walls of the arteries while helping the body fight against the effects caused by free radicals.

Being a product promoted for featuring independent factors that can help maintain the health of the capillary walls, hence eliminating cholesterol from the entire circulatory system, Cyruta relies its effects on a combination between Vitamin C and a proprietary herbal blend.

This particular blend features dried buckwheat. This ingredient is thought to have a phytochemical named rutin which is a part of flavonoids, thus explaining its qualities as an antioxidant. Because of this, rutin can help the body protect itself against a large variety of oxidative toxins such as those released in minor-fiber irritation. It is often viewed as a powerful radical eliminator, better than Vitamin C or E. On the other hand, synergistically speaking the mixture between rutin and those two vitamins is able to create an antioxidant powerhouse.

One important feature linked to this antioxidant property possessed by rutin is enhancing the skin’s quality which is vulnerable to environmental damage like sun rays. Because of this, rutin supplementation can overall help protect the skin and nerves from oxidative damage.

As a product promoted for containing independent factors that may help maintain the integrity of the capillary walls, thus supporting cholesterol transport throughout the entire circulatory system, Cyruta bases its effects on a mixture between a proprietary herbal blend and Vitamin C.

This distinct blend mainly features dried buckwheat. Buckwheat is thought to contain a phytochemical called rutin that is a part of the flavonoid group, hence explaining its behavior as an antioxidant. Therefore, rutin helps the body protect against a wide variety of damaging oxidative toxins like those released by minor-fiber irritation. It is often viewed as a more powerful radical eliminator compared to Vitamin E or C. However, synergistically the combination between rutin and those two above mentioned vitamins should create an antioxidant powerhouse.

One important feature directly linked to the antioxidant quality of rutin is improving the quality of the skin which is particularly vulnerable due to environmental damage such as sun rays. Therefore, rutin-based supplementation may overall help protect the nerves and skin from oxidative damage.

Moreover, the soluble fiber found in buckwheat may contribute to maintaining the proper balance between high and low density of lipoproteins, thus preventing the oxidation of low-density lipoproteins in the artery walls. However, side effects like bloating or diarrhea may occur if the product isn’t handled properly.

There are online consumer testimonials about Cyruta. What is being reported includes the following:

5) What You Need to Know Before Taking Cyruta

6) How Much Does Cyruta Cost?

Found for purchase in forms of bottles containing 90 capsules, Cyruta represents a moderate priced product easily affordable for everyone desiring to follow this treatment. Because the suggested daily intake is usually one tablet per day, a bottle is sufficient for approximately forty-five days of treatment if all goes accordingly. Since its release in 1948, the product was sold through local retailers. Nowadays, due to the presence of the internet, people can purchase it directly from the manufacturer’s website or other online retailers. However, its price varies depending on the chosen retailer.

Furthermore, the fiber found in buckwheat which is soluble may maintain a proper balance between low and high density of lipoproteins, therefore preventing oxidation of lipoproteins in the artery walls.

8) Our Final Take On Cyruta

All in all, Cyruta is advertised as a dietary supplement meant for those who desire an enhancement of their cardiovascular systems by lowering levels of cholesterol that usually harm the coronary walls. In addition, the supplement may also prove helpful in enhancing concentration, memory and attention. On the other hand, further research is needed in order to validate these claims. Its main benefits are due to a combination between a proprietary blend whose main compound is dried buckwheat and Vitamin C. Despite the fact lack of claimed side-effect from a manufacturer point of view, some may be noticed and people should immediately stop its usage if so.

If you like Cyruta, we think you’d love its upgraded version Cyruta Plus. 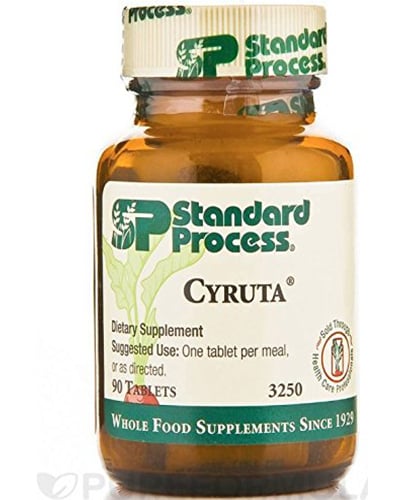 Customers Questions and Answers with Cyruta

clear
Q:
What does Cyruta contain?
A:

Overall, Cyruta represents a homeopathic remedy with functions related to balancing cholesterol levels, thus enhancing the health of the cardiovascular system. Its manufacturer is called Standard Process and has been on the nutritional market since 1929. This formulation was first introduced in 1948 and enjoyed great popularity ever since. Particularly, the remedy addresses issues like heart attacks, strokes or coronary problems that are usually caused by high levels of cholesterol in the walls of the arteries.

Overall, Cyruta is promoted as a remedy for those seeking to enhance their cardiovascular functions by lowering cholesterol levels that may harm the coronary walls. Additionally, the remedy may also prove reliable in improving concentration, attention, and memory. However, further research is required to determine the validity of these claims. Its core benefits focus on a mixture between Vitamin C and a proprietary blend whose main component is dried buckwheat. Despite the fact that there are no alleged side-effects by the manufacturers, some may appear due to its ingredients and people are advised to stop the treatment if so immediately.

I dragged my father to my holistic doctor and this was the product he advised him to take for his clogged arteries. It mostly worked and I would recommended for people with similar problems.

Standard Process products are real whole food products that work! I love that I can adjust the dosage with the small tablets and to avoid stressing my body with large capsules of hard to regulate doses. I take it as an antioxidant and an aid to cardiovascular health.