Ovex Review – 8 Things You Should Consider

Ovex is a dietary supplement designed to support healthy ovarian functioning. The company manufacturing this product is Standard Process. Ovex is especially designed for women. This product contains Cytosol extracted from the ovaries of bovine. Because of this, the product might help balance the levels of hormones in women.

Standard Process is a company that claims to be devoted to supplying high quality natural supplements to consumers all around the world. The company was founded in 1929 by Dr. Royal Lee. Since then, this famous researcher has done everything in his power to create different products based on all natural ingredients. His most appreciated research has been with PMG. The Protomorphogens or PMGs Dr. Royal Lee has been working with have been mostly extracted from bovine, but he has experimented with porcine PMGs as well. Years of research later, Dr. Royal Lee has proven the beneficial effect these PMGs have on the human body and especially on maintaining the health of cells.

The company claims that Ovex is designed to provide ovarian tissue support but can also help women regulate their menstrual cycle due to the follicle that secretes estrogen and progesterone, the two hormones responsible for the reproductive organs in women. Ovex is just one of the solutions offered by Standard Process.

Standard Process has made two types of Ovex. Ovex, with Cytosol extracted from bovine and Ovex P, with Cytosol extracted from porcine. Cytosol is also known as intercellular fluid (ICF) or cytoplasmic matrix and it is the liquid found in cells. Almost half of the proteins in the cell are found in the cytosol, when talking about mammals. Recent studies show that the majority of metabolic processes and metabolites are found to occur in the cytosol. Dr. Royal Lee has researched cytosol and PMGs and has demonstrated that these two ingredients can be a beneficial influence on almost every cell in the human body, depending on the organ they were extracted from.

Ovex (with bovine extracted PMGs) as well as Ovex P (with porcine extracted PMGs) is one of the solutions offered by Standard Process for a variety of female hormone-related issues. Cytosol, or more commonly known intercellular liquid is the main ingredients in Ovex and Ovex P. The benefits of Cytosol have been proven by numerous tests. Cytosol can benefit the entire human body, depending on the organ it was extracted from. For example, as it is in Ovex’s case, the Cytosol contained by this supplement was obtained from the ovaries of bovine. Thus its major advantage will be on the ovaries, aiding cell growth and regeneration in the ovaries as well as maintaining a balanced hormonal level.

Ovex also includes Vitamin C and calcium lactate as well as magnesium. Calcium and magnesium are synergistic ingredients, meaning that one without each other might lead to little to no results. However, taken together, these two minerals might cause improvements throughout the entire body. Calcium lactate is the best choice because it is more easily absorbed by the body and aids a better absorption of magnesium as well.

Vitamin C is one of the most common vitamins used by humans in the entire world. Most of them, however, do not know how helpful Vitamin C is. This vitamin has been proven to have beneficial effects when dealing with cancer, cardiovascular diseases, and eye health. Vitamin C is also known for the boots it gives to the immune system and for its Effectiveness against the common cold. Also, recent studies have discovered that Vitamin C might also aid skin health.

There are testimonials posted online about Ovex. What is being stated includes the following:

6) How Much Does Ovex Cost?

Ovex can be purchased directly from the manufacturer’s website. Both Ovex and Ovex P are currently being sold at an inexpensive price. Some online retailers might offer discounts and promotions. One bottle of Ovex contains 90 capsules. The recommended daily dosage is that of one tablet per meal or as directed. Assuming three meals per day as average, one bottle of Ovex should last for about one month of use. The manufacturing company does not offer a money back guarantee policy or a free trial period. However, the company does offer free shipping. Both Ovex, as well as Ovex P, are sold at a more affordable price than most supplements available on the market.

Vitamin C is one of the most common remedies used by people all around the world. Whether they use it to treat a common cold or just to boost the immune system, vitamin C is one of the pharmaceutical products most sold in the world. Few know, however, that vitamin C has a lot more benefits than what the regularly advertised ones. Vitamin C can protect against cancer, strokes, cardiovascular diseases, and it can also boost eye health. Even the skin might benefit from a little more vitamin C in the system.

Ovex is a dietary supplement designed for women. Whether they need to regulate hormone levels in their body or just protect their ovaries while trying to conceive, Ovex is one of the solutions offered by Standard Process. The company has been described as reliable when it comes to their products and most customers seem happy with the results they achieved over time whilst using Standard Process supplements. Ovex can also be taken by other groups of people, such as individuals suffering from immune related issues or those wanting to improve the overall health of their cells. Customer testimonials have rated this supplement as a good alternative for other more powerful drugs. Overall, Ovex seems like a good solution for women. 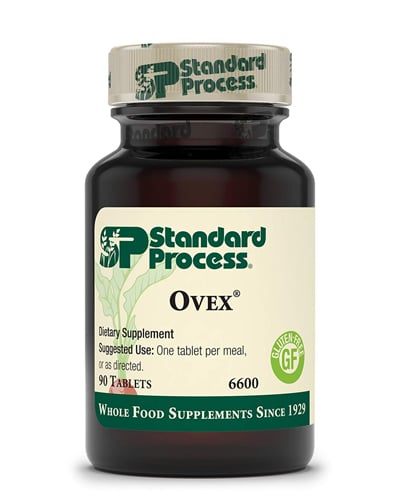 clear
Q:
What does Ovex contain?
A:

Q:
What is Ovex supplement?
A:

Ovex is a supplement designed for women. The ingredients contained by Ovex's blend have the ability to regulate female hormones and promote healthy functioning ovaries. The product is recommended for women trying to conceive or for those on the brink of menopause. The product might also regulate the menstrual cycle. The manufacturing company, Standard Process, released two types of Ovex on the market, depending on the type of Cytosol it contains. Ovex with Cytosol extracted from the ovaries of bovines and Ovex P with Cytosol extracted from the ovaries of porcines. Both supplements contain nutrients that help support the ovarian tissue in humans.

Overall, Ovex, as well as Ovex P seems like a good alternative for other more powerful drugs when dealing with hormone imbalances. Either wanting to protect your ovaries, gain fertility or just to alleviate menstrual symptoms, this supplement seems like a good idea. In testimonials, customers seemed pleased with the results they achieved through Ovex, and that is a good sign when rating the product's Effectiveness. Scientific tests also lead to the belief that Ovex poses as a rather effective looking dietary supplement with almost no known side effects. Although the product is designed for women, it might benefit cell health in other groups of people as well.

I have been taking Standard Process Products for over ten years. They are superior products. They are only available through Healthcare Professionals, like myself. I am a Chiropractor and recommend these products to patients. I have seen remarkable results for balancing out cycles, becoming pregnant and sustaining pregnancy. They are natural organic supplements that work with the body and do not produce side effects.

Good morning. Thank you for your review of this product. I have been suffering from significant PMS for many years. My MD is prescribing Prozac for me during the last part of my cycle. Is this contraindicated if I am beginning this product as well?

I was wondering if Ovex 6600 Standard Process with bovine extract is safe to take during pregnancy? I am 4 weeks along but I have endometriosis and it was recommended by my acupuncturist. I am taking 1 pill (358 mg) twice a day combined with a prenatal multivitamin. Please get back soon. Thanks!

According to Standard Process, Ovex is suitable for pregnant or nursing women.