Geratam is a drug based on the active substance Piracetam advertised to enhance memory and cognition, slow down brain aging, increase blood flow and oxygen to the brain, aid stroke recovery, and improve Alzheimer’s, Down syndrome, dementia and dyslexia.

This product is developed and marketed by UCB, a company located in Brussels, Belgium. UCB is a global bio-pharmaceutical business focused on severe diseases and currently has operations in approximately 40 countries worldwide. The company registered global revenue of ¬3.2 billion in 2011. Although Piracetam now sells under different trade names such as Nootropil or Nootrop, it was UCB that discovered this nootropic drug in 1964.

Geratam belongs to a family of cognition enhancing medicines called nootropics. The formula is free from common allergens.

Geratam is advertised to improve cognition, memory, attention and concentration as well as to alleviate certain brain aging symptoms.It appears that Piracetam works by stimulating an area of the brain called corpus callosum, allowing the two hemispheres of the brain to better communicate with each other, which further improves the functioning of the central nervous system.Also, Piracetam reduces the accumulation of lipofuscin, the so called aging pigment, in brain tissues, and may have the potential to reduce oxidation from unsaturated fatty acids that lead to cell damage.

Piracetam has been the topic of a large number of clinical experiments and has shown positive results in the treatment of Alzheimer’s disease, dyslexia, Parkinson’s disease, vertigo, vertebra-basilar insufficiency, peripheral vestibular disorders, cerebral palsy and cerebral ischemia.

The effects of Piracetam on healthy people did not receive as much attention, however a double-blind, placebo-controlled study conducted on healthy college student revealed that Piracetam has memory enhancing powers.

2) Details on Geratam Ingredients and Uses

Geratam is advertised to be able to improve mental functions such as cognition, memory, intelligence, motivation, attention and concentration.

Piracetam has been studied in an extensive number of clinical experiments and has shown positive results in the treatment of post-stroke aphasia, epilepsy, cognitive decline following heart and brain surgery, dementia and myoclonus. There is little information about Piracetam’s effects on healthy people. However, a double-blind, placebo-controlled study conducted on healthy college students, showed that a two-week regimen of this ingredient enhanced their memory powers. The drug may influence cognitive, neuronal and vascular functions in a positive way, without acting as a sedative or stimulant.
Piracetam is available online and in shops in over 100 countries, but some states do not allow its commercialization.

Testimonials about Geratam are posted online:

The average price per capsule makes Geratam a relatively inexpensive drug. One container usually consists of 60 tablets, which (depending on the dosage) should be enough for 30 days.
As it is a prescription drug, one requires a medical prescription to obtain it.

An exact daily dosage is not generally accepted. UCB recommends taking a daily dose of 2,400 to 4,800 mg of Geratam in three divided doses. Testimonials posted online report that the product works and delivers the advertised benefits. Common side effects of Piracetam include anxiety, trouble sleeping and weight gain.

Geratam is based on a popular nootropic drug called Piracetam, discovered in the 60’s. Since then, Piracetam, now sold under numerous brand names, has been extensively researched and many of its benefits are supported by scientific evidence. Piracetam has shown positive results in treating various neurological problems (Alzheimer’s, dementia, epilepsy, myoclonus, etc), but also in enhancing memory in healthy patients. Consumer testimonials on Geratam support the benefit claims.

However, there are some potential side effects associated with the drug, as well as some safety concerns for certain categories of patients. We hence recommend our readers to further investigate and talk to their doctors before deciding to start treatment. 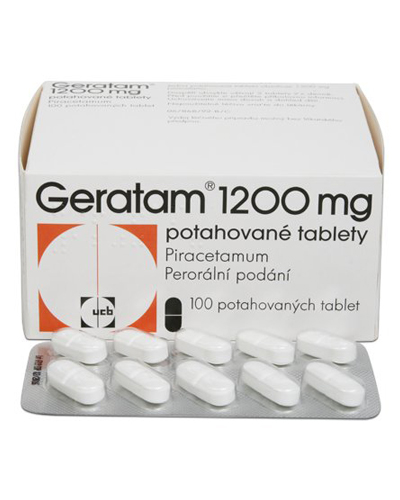 clear
Q:
What are the core ingredients in Geratam?
A:

Q:
What is Geratam supplement?
A:

Geratam is a drug that is said to enhance memory and cognition, slow brain deterioration, and increase blood flow to the brain. The manufacturer is called UCB and is a business located in Brussels, Belgium. Geratam is based on the active substance called Piracetam, a nootropic drug that supports the prevention of learning and memory disorders, as well as several types of attention disease or stress related diseases, thus aiming to support general brain health and well-being.

The Effectiveness of Piracetam, the active ingredient found in this formula has been under study for decades. It has shown positive results in the treatment of neurological problems (epilepsy, dementia, myoclonus, etc.) and also in enhancing the brain power of healthy people. Piracetam has also been used to alleviate the symptoms of Alzheimer's disease and treat cognitive ailments associated with alcoholism.

As Piracetam can be found under so many different names, we advise our readers to investigate similar products further before making a purchase.

The memory and attention boost is incredible.

I tried better piracetam based drugs, but this one gets the job done nicely.