The formula is manufactured by the American company Standard Process, manufacturing and supplying healthcare professionals and patients with dietary supplements since 1929.

The formula is recommended to adults, including pregnant and lactating women. It supports both the health of the mother and the baby. According to the manufacturer, Omega-3 Tuna Oil is the third-party tested for environmental contaminants.

Omega-3 Tuna Oil is designed to deliver essential Omega-3 fatty acids EPA and DHA. These are essential fatty acids, meaning the body cannot produce them. Still, instead, they have to be obtained from the diet: food sources or dietary supplements.

The importance of EPA and DHA to numerous body functions has been heavily researched over the past decades. Evidence indicates that low levels of EPA and DHA in the body are one of the causes of many neurological functions in the spectrum of mood disorders (postpartum depression and major depression), memory disorders (Alzheimer’s disease, dementia symptoms), and attention diseases such as Attention deficit hyperactivity disorder (ADHD).

Also, EPA and DHA may improve symptoms of gastrointestinal conditions such as Bowel Disease, rheumatoid arthritis, and certain skin disorders.

DHA is believed to play a crucial role in developing infants’ central nervous system and eyes, starting from the fetal stage. This is why many pregnant and lactating women are recommended Omega-3 DHA supplementation.

Specific concerns exist regarding potential interactions with blood pressure medication, anticoagulants, diabetes medication, and aspirin. Also, specific side effects, although rare, have been associated with Omega-3 supplementation, including headaches and diarrhea.

Designed to deliver Omega-3 fatty acids that are essential for proper body development, Omega-3 Tuna Oil bases its positive effects on EPA and DHA’s qualities. Even though these fatty acids are necessary for body development, the body cannot produce them to only be taken from dietary supplements or food sources.

The importance of DHA and EPA is linked to a variety of bodily functions. It has been clinically researched in the past decades.

Research showed that low levels of DHA and EPA in the body represent one of the principal causes of neurological functions in the spectrum of memory disorders like dementia and Alzheimer’s disease, attention diseases such as ADHD, or mood disorders that include major depression and postpartum depression.

Notably, DHA is thought to play a crucial role when it comes to the development of some central nervous features starting from infants. Due to this aspect, most lactating and pregnant women are suggested to take supplements that contain this compound to ensure proper nourishment. On the other hand, there is absolute concern regarding DHA supplementation’s potential side effects, including side effects like diarrhea or headaches.

There are online testimonials about Omega-3 Tuna Oil. What is being reported includes:

Omega-3 Tuna Oil is sold by bottles that contain 120 pearls. Considering the daily serving amount of two pearls, a bottle is enough for sixty days of treatment, approximately two months. People can purchase it either from the Standard Process official website or other offline or online retailers.

Even though its price varies from retailer to retailer, it is viewed as a moderate-priced supplement compared to similar ones. Unfortunately for people living outside the United States, the manufacturer website doesn’t have an international policy.

Thus they should seek the product on other local or national retailers. There is no free available sample.

The recommended daily dosage is 2 capsules per day. No side effects or precautions are mentioned by the manufacturer.

Today, many healthcare specialists praise the importance of Omega-3 in the diet of adults, children, pregnant and nursing women, and elderly people.

There are numerous health benefits to Omega-3, ranging from central nervous system health to cardiovascular support. Also, there is an astonishing amount of research that supports these medicinal benefits. Omega-3 Tuna Oil has received numerous positive reviews from customers.

The manufacturer is an experienced manufacturer, which leads us into believing the formula may work for some consumers. Still, you should remember this is a dietary supplement not thoroughly regulated.

Potential side effects and drug interactions may appear. To prevent any unwanted effects, we recommend you carefully read the label and ask a healthcare provider’s opinion. 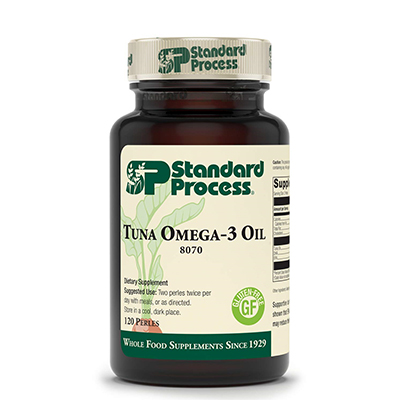 clear
Q:
What are the Omega-3 Tuna Oil ingredients?
A:

Q:
What is Omega-3 Tuna Oil supplement?
A:

Regarded as a useful dietary supplement for pregnant or nursing women, Omega-3 Tuna Oil is advertised as possessing beneficial effects directly linked to its components: EPA and DHA.

These fatty acids positively influence the normal brain and eye development, inflammatory response of the body, and fight against free radical damage and cognition. The manufacturer of this product is called Standard Process and was established in the United States in 1929.

In the past two decades, many healthcare specialists have praised the importance of Omega-3 in the daily nutrition of pregnant or nursing women and adults or seniors. Many health benefits can be linked to the usage of Omega-3 - these range from the cardiovascular system's health to central nervous system enhancement.

Additionally, there is a broad spectrum of positive reviews from people who have already tested this supplement. Although it was recently added to its product list, it became one of their most popular products. The experience of the manufacturer also comes as proof of its potential efficacy.

A friend gave me a bottle of Tuna Omega to try rather than the fish oil I had been using. After two weeks of take Tuna Omega, the relief from pain and ease of movement is amazing. Will always keep this in my cupboard and as a part of my suppliments.

After years of using Fish Oil Omega 3, 2400mg twice a day, someone suggested I try Tuna Omega 3, same strength. After 3 weeks, I was expecting to at least maintain the level of relief that regular fish oil was providing me.

I have been using SP Omega-3 Tuna Oil for about a month. My only concern is whether there is mercury in this product. My friend told me never to take Tuna oil because it is high in mercury, so any risks out weigh any benefits. Please disclose mercury content in this product and what, if any, are safe amounts to consume. Thank you.

Was the above question about mercury in the tuna omega 3 oil answered?

It says that that the product is 3rd party tested for environmental contaminants (which I would assume means mercury), but it would be nice if they could verify that it is mercury free.