Oceans 3 Better Brain is marketed as a dietary supplement for neurological and brain function support. The manufacturer of this product is a company called Garden of Life, a company headquartered in Florida, United States. The company manufactures nutrition products for designed to assist with a number of health concerns. Oceans 3 is a product line which target brain nutrition with formulas based on Omega-3 and OmegaXanathin.

According to the manufacturer, the formula is the only Omega-3 supplement which contains the proprietary complex called OmegaXanathin (unique combination of ultra-pure fish oil, fucoxanthin and astaxanthin). The product works by improving blood flow to the brain and thus making oxygen more available to essential brain processes and functions.

Direct core benefits mentioned by the manufacturer include improvement of stress and aging related memory loss, support for the focus, learning and memory functions and support of mental acuity, as well as promoting a relaxed state of mind and emotional balance.

Astaxanthin, for instance, belongs to a class of substances called carotenoids and came to modern science attention only recently. Research has shown it to be much more powerful than Coenzyme Q10 or Vitamin C if we refer to its antioxidant properties. It is currently used to prevent conditions caused by oxidative stress and conditions that derive from oxidative deterioration such as heart disease or dementia.

Bacopa Monnieri extract is one of the most frequently used botanical ingredients in brain health promoting supplements. Used for thousands of years in Ayurvedic medicine, the extract is currently used to support normal memory function (such as learning, focus and memory) and to fight against anxiety, stress or joint pain. Side effects are rare and usually occur in long term use cases, and while the manufacturer of Better Brain mentions no associated side effects, we advise you to keep in mind individual ingredients side effects.

If you’re a woman looking to complement Ocean’s 3 Better Brain, we recommend checking out Garden of Life Vitamin Code Women.

Oceans 3 Better Brain’s formula represents a combination of three herb extracts and Omega-3 fatty acids. Evidence has shown that Omega-3 fatty acids are viewed as essential for the human body because it is required for a normal functionality. Because the body can’t produce these fatty acids, people usually receive them from diet or supplementation.

One of Omega-3’s properties is reducing arrhythmias, therefore lowering the risks of a heart attack. Also, it represents an antidepressant booster, thus decreasing the symptoms of depression. Because these acids are concentrated in the brain, they appear as important for cognitive as well as behavioral functions. On the other hand, there are some annoying side effects related to the consumption of Omega-3 based supplement that include: nausea, stomach upset, and loose stools.

Another ingredient found in Oceans 3 Better Brain is Vinpocetine, a chemical that resembles a substance from Vinca minor, a periwinkle plant. Its beneficial qualities are related to the improvement of the blood flow towards the brain. Therefore it has been used for memory enhancing, information processing skills and treating conditions which are an impediment to learning. There can be some unwanted side effects related to Vinpocetine, such as nervousness, disturbances, headaches and nausea.

There aren’t any customer testimonials related to the effects of this remedy.

Sold by 90 capsules bottles, Oceans 3 Better Brain can be found for purchase either on manufacturer website as well as other online or offline retailers. A bottle is sufficient for a thirty days treatment if the remedy is being taken within label dosages. By buying this product in larger quantities, people usually receive promotions and discounts.

7) How to Use Oceans 3 Better Brain

The recommended daily dose of Oceans 3 Better Brain is 3 capsules.

Oceans 3 Better Brain promotes brain health, better memory and prevention of cognitive decline caused either by stress or by aging. The formula is rich in antioxidants and Omega-3 fatty acids, while also containing herbal ingredients. Most of the ingredients have been traditionally used or clinically studied to have neuroprotective properties.

The manufacturer offers no evidence of the formula’s effectiveness and consumer reviews are available in a small number. Still, they are generally positive, with a few mentioning mild side effects associated to taking the product (headaches).

Given that there are no side effects warnings issued by the manufacturer and that consumer reviews cannot be fairly used to assess the product’s effectiveness, we recommend specialized advice prior to starting treatment with Oceans 3 Better Brain. 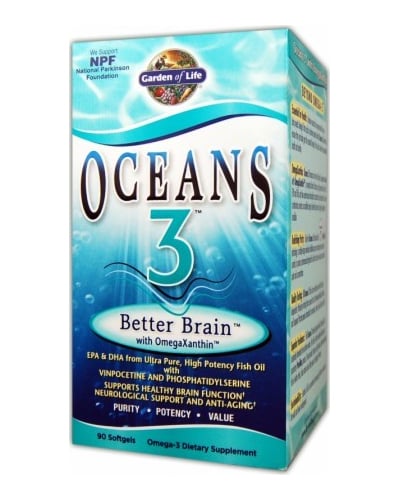 clear
Q:
What are the active ingredients in Oceans 3 Better Brain?
A:

Oceans 3 Better Brain is a supplement offered by Better Health. The product is a combination of powerful ingredients that include Vinpocetine, Bacopa and Phosphatidylserine, that offer brain and neurological support, but also OmegaXanthin, a combination of highly purified Omega-3 fatty acids and two powerful antioxidants: fucoxanthin and astaxanthin, that supports cardiovascular health, supports the body's natural response to inflammation, immune system health, eye health and even supports healthy skin, bones and joints.

Designed as a supplement based on a combination between herbal extracts and Omega-3 fatty acids, Oceans 3 Better Brain is recommended for people who want to enhance their cognitive functions by improving the blood flow to the brain. Also, it can improve mood-related issues. On the other hand, there are some unwanted effects related to this treatment, and it is important for people to stop using in once either of them occurs. For improved results, this supplement should be combined with a healthy diet and a good exercising program. People should also consider training their brains by using mind games

I like fish oil to have added things in it other than just fish oil and this product delivers an excellent compliment of ingrediants.

I cannot swallow pills and therefore, I chewed these and sucked out the liquid. It was not good! I will buy the liquid next time.