Brainalin is advertised as a dietary supplement that contains eight natural super memory vitamins that act as stimulants, support the brain’s cognitive functions, and deliver necessary nutrients that sustain a good and healthy brain function.

It was created by Puridian, a supplement manufacturer located in California, United States.

Brainalin is said to be very potent and manifests apparent effects within two weeks or less of use, with users experiencing an increase in neural transmission speed as well as in the processing of information.

Puridian also claims that Brainalin can help users experience heightened focus, the ability to analyze situations better, and a better short and long-term memory and recall.

How valid are these claims? How does Brainalin work?

This article discusses Brainalin’s ingredients and their benefits, cost, serving size, etc. Keep reading to find out how Brainalin can help you or a loved one achieve optimum brain health and function.

Brainalin is a dietary supplement containing a fusion of herbs and amino acids that have proven effective in supporting brain health and improving memory, attention, and cognitive functions.

Its ingredients have been used for years in alternative medicine to combat the effects of ADHD and cognitive decline due to aging.

The sections below discuss more on the ingredients in Brainalin and their uses and benefits.

Brainalin’s blend of herbs and amino acids is designed to support various aspects of brain health. Some of its benefits are that it:

Some of the herbs in Brainalin, like Ginkgo biloba, may cause headaches, stomach upset, and nausea; however, these effects are usually short-lived.

Each bottle of Brainalin is designed to provide a month’s supply, containing 30 capsules, and costs $29.97 at major retailers.

Take one Brainalin capsule daily, preferably with a meal.

Brainalin aims to situate itself on the market as an effective and natural dietary supplement that supports various aspects of brain health. These claims are backed up by a consistent number of positive testimonials from satisfied customers.

The ingredients contained in Brainalin are well-researched and have beneficial effects on brain health. This supplement is worth trying and is backed by a full money-back guarantee from the manufacturer available for a year from product purchase.

Overall, Brainalin is a good supplement choice to enhance cognitive functions, attention, focus, and memory, but it should not be used outside of its directions or recommendations for best results. 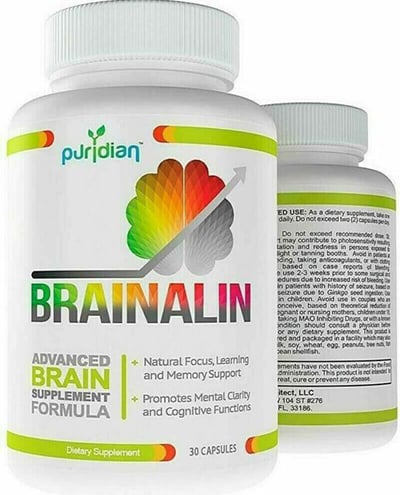 clear
Q:
What are the Brainalin ingredients?
A:

Q:
Brainalin is all about what?
A:

Brainalin is a dietary supplement containing a fusion of herbs and amino acids that have proven effective in supporting brain health and improving memory, attention, and cognitive functions.

Q:
What are the Brainalin side effects?
A:

Herbs like Ginkgo biloba may cause headaches, stomach upset, and nausea; however, these effects are usually short-lived.

Q:
Where can I buy Brainalin?
A:

Q:
How much does Brainalin cost?
A:

Brainalin situates itself on the supplement market as being an effective and natural dietary supplement that is designed to support brain health. There are a large number of positive customer testimonials that back up the claims of Effectiveness, and the ingredient chosen also support these claims. Although the price is quite high, there is a full money-back guarantee that is available for a year. Some of the ingredients used have been reported to cause some side effects; a medical consult is advised before using this formula, especially if pregnant or nursing. This formula is also said to benefit from the experience of over 1000 people all over the world that have proven that it works.

Q:
Are Brainalin ingredients safe?
A:

Brainalin contains natural ingredients that are generally safe for use as recommended.

Q:
How should I take Brainalin
A:

Take one Brainalin capsule daily, preferably with a meal.

Q:
How do I contact Brainalin customer service?
A:

Q:
Can I return Brainalin?
A:

Return options for Brainalin may vary by retailer.

Q:
What do Brainalin reviews say?
A:

There are online testimonials about Brainalin. What is being said includes the following:

Q:
Who makes Brainalin?
A: