Neuro-Max II Review – Is it Effective?

Neuro-Max II is a dietary supplement for your brain which can increase cognition and memory, while enhancing focus and concentration. It’s sold by California company MRM Nutrition, who says they were established in 1996. They’re very nature oriented; many of their products are certified vegan, gluten free, organic, and made in a GMP facility. The only potential problem is that MRM are anti-GMO, a stance which evidence does not support. Some people don’t trust products with GMOs, but there is no actual scientific evidence for that position. Some organizations take advantage of misinformation to sell expensive “non-GMO” labeling to farmers. Wanting a GMO-free product is merely personal preference.

Neuro-Max II contains 6 nootropic ingredients plus Niacin. These ingredients include bacopa monnieri, vincamine (the natural form of vinpocetine), and cytidine-5-diphosphate choline (CDP-Choline). Niacin, also known as vitamin B3, is found here at 10 mg per serving. The recommended daily allowance is 13 to 16 mg for adults, with food when possible. If pregnant or lactating you’ll generally need 17 to 18 mg instead. MRM Nutrition therefore has the daily value incorrect. It’s listed as 50 percent, when it should be 56 to 77 percent (for an average adult, 10 mg Niacin is about 60 percent of your daily value).

Neuro-Max II contains 6 active ingredients and vitamin B3 (Niacin). These ingredients include phosphatidylserine, ginkgo biloba extract, and ashwagandha. Ashwagandha is a plant from the Nightshade family and has long been used in traditional Ayurvedic medicine. It’s thought to be an adaptogen. Traditionally the powdered root is mixed with warm milk and honey, with the patient drinking the mixture before bed. People in Yemen make a paste from the dried leaves as a treatment for burns and other wounds. In modern medicine it’s sometimes given to cancer patients to reduce immunosuppression, stress, and fatigue. It may have potential to aid people in regards to blood pressure, depression, and perceptions of fatigue. Ashwagandha does interact poorly with some types of medicine, so it’s important to consult your doctor before deciding to buy any. The lowest effective dose is considered 300 to 500 mg a day, although it works for some people at 50 to 100 mg. Each capsule of Neuro-Max II only has 40 mg of Ashwagandha, so you’ll have to take at least two capsules and might need more.

Each bottle has 60 vegetarian capsules and it’s recommended that you take two a day, so this is a bit expensive for a supplement which only lasts a month. If you can get a significant discount – through MRM or another website – it can be very affordable. The price ranges from below average to above average, so shop around and do your research before deciding to buy.

MRM offers free shipping through their website, but only for orders over $100. MRM has three types of sample kits, which are technically free but you have to pay a slightly inflated shipping costs. Each kits contains 7 to 10 samples of various products that MRM sells. If you’re interested in what they do, but don’t want to spring for a full size supplement, this is a good option for you.

If you think Neuro-Max II is too expensive for you at the moment, we think you’ll like how relatively cheap Onnit Alpha Brain is compared to the competition.

Phosphatidyl is a chemical naturally found in your body. It’s supposed to promote inter-cellular communication in the brain while aiding your neurotransmitters involved in learning and memory. Some people do report some stabilization in their mood, but most people see memory improvements. It can also help with language skills, stress reduction, and increased attention for those at risk of age-related mental decline. Phosphatidylserine is sometimes given to people suffering from mild Alzheimer’s disease. People don’t tend to encounter side effects until they take a serving of 300 mg or more in one day.

There are plenty of positive reviews for Neuro-Max II and clearly it works for some people. The company has a decent reputation and their products can be rather inexpensive, making this a good buy. The weak formula, however, needs more optimization. Some people – generally those with plenty of experience taking nootropics – might need as many as four capsules a day. You would have to take six to get the proper amount of vincamine (and phosphatidylserine for some). So in general, this a decent product for people new to nootropics. One to two capsules a day could give you a noticeable boost in cognition. 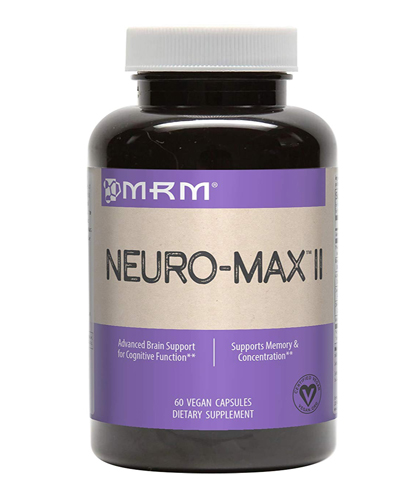 clear
Q:
What are the active ingredients in Neuro-Max II?
A:

Almost all reviews for this supplement are positive. Some people have been using it for years and cite a clearer mind, plus additional motivation for daily tasks. One person said this replaced their previous supplement regimen, which involved four different products. Overall Neuro-Max II can be regarded as a decent product, although it's best for people new to supplements. The formula is a little weak and isn't optimized for maximum effectiveness. Several ingredients need the amounts changed.

I purchased 2 products from MRM. Neuro-max II and the Acetyl-L-Carnitine. Can I take both all at the same time for maximum effect?? Thanks. Both products from the MRM brand.

Title for your comment
Can i take Neuro-max with Acetyl L-carnitine together?
Reply
Iulian (Editor)
Reply to  desiree

Typically, the two products you just mentioned – Neuro-max II and the Acetyl-L-Carnitine – can be taken together. However, we recommend contacting MRN Nutrition customer support department and ask if there are any potential interactions between these two supplements. You can contact MRN Nutrition by phone at +1 800-948-6296 / +1 760-727-8177.