Brain Boost is a supplement of Chocamine, Sharp PS Gold, and vinpocetine. This formula was created by Jarrow Formulas, a west coast American company founded in 1977. With this product, they say they can support your focus, mental cognition, and memory skills. The company has a long history with dietary supplements and collaborating with researchers. One might expect this from a place that still thrives after more than 30 years of being in business. Many of their products have won awards, possibly in part to their scientific advisory board. Staying on top of the newest studies is important in developing quality products and formulas for public use.

Chocamine is developed by New York company RFI Ingredients, a manufacturer of ingredients and formulas since 1989. Sharp PS Gold is a PS-DHA conjugate from Israeli company Enzymotec. Founded in 1998, they have multiple locations and clinically proven products. Essentially, Sharp PS is a combination of phosphatidylserine and the Omega-3 fatty acid DHA. The DHA is in extremely low amounts, not enough to deliver the traditional benefits of DHA, but may assist in getting the phosphatidyl to your brain, or vice versa. At least one clinical trial showed that a combination of phosphatidylserine and DHA benefits your brain in big ways.

2) What Are Brain Boost Ingredients?

If you want a more focused formula for brain health with just two ingredients from Jarrow, we recommend checking out MagMind.

3) What Does Brain Boost Do?

Capsules of Brain Boost all contain Chocamine Plus (extract of theobroma cacao), Sharp-PS Gold (phosphatidylserine with DHA), and vinpocetine. Chocamine and Sharp-PS are patented products.

Chocamine is supposed to provide the taste, smell and health benefits of chocolate, without the sugar and fat many people don’t want. It’s also dairy free, which means it’s good for the lactose intolerant. Chocamine naturally contains small amounts of theobromine and caffeine. There’s only 20 mg of caffeine per capsule, which is a negligible amount. Even instant coffee and green teas have higher concentrations of caffeine, so this likely won’t do a lot to stimulate you.

Theobromine is a mild stimulant found in chocolate and tea leaves although not a true stimulant, it does have some properties that are similar to caffeine, and it can provide you with small amounts of extra energy. As a therapeutic medicine it’s mostly used to increase urine production and dilate blood vessels (which can help with high blood pressure). It could potentially increase resistance to tooth decay as well, since it can improve the microhardness of enamel.

6) How Much Does Brain Boost Cost?

Directions state to take 1 capsule with breakfast and 1 with lunch. This gives you the amount of Chocamine the company recommends, which is 500 mg per day. Each bottle lasts about a month, and the price is average. If you can find Brain Boost on sale online or in local stores, or otherwise significantly below MSRP, it can be very inexpensive. It’s been known to be on sale, sometimes more than 33% off, which often helps make this product worth trying.

Phosphatidyl is a chemical naturally found in your body. It’s supposed to promote inter-cellular communication in the brain while aiding your neurotransmitters involved in learning and memory. Some people do report some stabilization in their mood, but a study on PS Sharp found no significant differences in mood. Just memory, mostly. It can also help with language skills, stress reduction, and increased attention for those at risk of age-related mental decline. Phosphatidylserine is sometimes given to people suffering from mild Alzheimer’s disease.

8) Our Final Take On Brain Boost

One reviewer said the effects were gradual, at least for the first couple of weeks of taking Brain Boost. Most people agree that this is a good product, with high quality ingredients, that can clear mental cobwebs. They report more energy than normal, without any of caffeine’s typical side effects like jitters. The exception was one person who likened the supplement to a small espresso, which didn’t do much. This might be due to a high tolerance for the energy boosting effects of the caffeine and theobromine in Chocamine. Overall the response is great, with boosts of mental energy and focus. If you want to add some clarity into your daily life, Brain Boost is recommended for you. 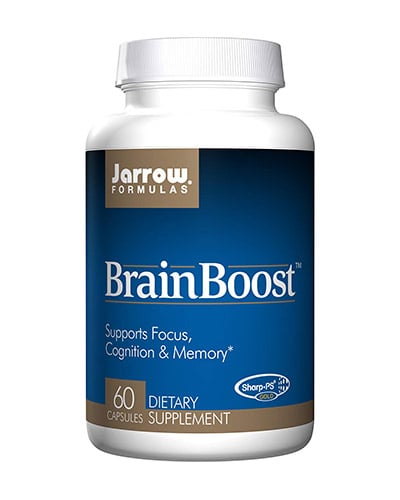 clear
Q:
What are the active ingredients in Brain Boost?
A:

Q:
Are Brain Boost benefits actually a reality?
A:

Chocamine seems to be an excellent addition to a supplement. It includes amino acids, which are always great for penetrating the blood brain barrier, and standardized theobromine. This one ingredient is often considered to caffeine because it lasts longer, has fewer side effects (if any), has a smoother stimulant effect, and is less addictive. It should be able to improve focus, concentration, reaction time, and memory. Vinpocetine gives these benefits a subtle boost. Sharp PS Gold builds on the Chocamine as well as having its own mental benefits. In general Jarrow's formula looks safe and effective. It might take days for the full effects to show, but when they show, you won't regret it.

Take this at lunch to help me get through the rest of my day. Boosts both mood and focus for me. I’ve been taking it for over 5 years. Unfortunately it seems to be discontinued. I have not seen it at Vitacost or Allstarhealth in months. On my last bottle which expired 06/22 but is still effective.

Title for your comment
Boosts mood and focus.
Have you tried this product?
Yes
Reply