Mental Alertness Review – Is it Effective?

Mental Alertness is a blend of herbal ingredients which work to optimize blood flow to the brain and provide antioxidant protection in order to ensure enhanced cognitive function. The formula manufactured by Gaia Herbs is advertised to support memory function, concentration and mental clarity.

Gaia Herbs is a U.S. based company with an experience of more than 20 years in the field of herbal supplementation. The company manufactures a variety of herbal teas, liquid formulations, and other condition targeted supplements, including a line featuring only USDA Certified Organic products. One of the company’s admirable practices is to disclose full information on their ingredients, starting from how plantation to the moment they are processed.

The supplement is recommended to adults, except pregnant and lactating women who are advised not to use Mental Alertness.

1) What is Mental Alertness?

Mental Alertness is an herbal mixture.

Vinpocetine is a chemical substance derived from a plant called periwinkle. It has been extensively studied for its cerebral enhancing effects. Evidence shows that Vinpocetine works by improving blood flow to the brain, as well as oxygen utilization. Its cognitive benefits include memory boost, mental acuity and improve overall brain performance. Several studies seem to indicate it can prevent conditions that impair learning and memory, such as mild cognitive impairment, Alzheimer’s disease, senility or dementia. The plant is considered generally safe, but may have certain side effects such as stomach pain, nausea, sleep disturbances, headache, nervousness, or dizziness.

Gotu Kola, another core ingredient of the formula, is effective in decreasing blood pressure in the veins, while also increasing peripheral circulation, including brain blood flow. The plant is rich in compounds called triterpenoids, which appear to be able to alleviate anxiety symptoms and increase mental function as some animal studies have revealed. Clinical trials and studies are investigating Gotu Kola for potential benefits against social anxiety, insomnia, skin lesions and wounds and varicose veins. It seems that it can also help improve concentration and memory and prevent neurodegenerative conditions such as Alzheimer’s disease.
People using Gotu Kola have reported several side effects such as: stomach upset, itching, nausea, and drowsiness.

2) What Are Mental Alertness Ingredients?

Eleuthero, also known as Siberian Ginseng has been used for a long time in countries such as China, Korea, and Russia. Its adaptogenic properties account for many of the plant’s uses as a stress relief and enhancer of resistance to physical, emotional, biological or chemical stress. Eleuthero helps with sleep disorders, anxiety disorders (social anxiety, obsessive compulsive disorder, etc.early stage), hyperactivity and nervousness in general. The herb is especially beneficial for mental alertness and short-term memory, because of its antioxidant properties. Side effects are rare and include sadness, drowsiness, sleep disruptions and muscle spasms.

Ginkgo Biloba is one of the best sold herbal supplements in Europe and the United States. The plant contains more than 40 active components, out of which two (the Flavonoids and the Terpenoids) have been shown to have medicinal applicability. These chemicals mainly have antioxidant effects and enhance blood flow properties, making Ginkgo potentially useful in boosting cognitive function and preventing or treating diseases cause by oxidative stress or poor circulation. Ginkgo is often prescribed early-stage Alzheimer’s disease and dementia, as many studies have revealed it can increase memory and think of people affected by this illness. Ginkgo Biloba may cause certain side effects such as headaches, dizziness, forceful heartbeat, and constipation.

6) How Much Does Mental Alertness Cost?

The formula comes in bottles of 60 vegetarian phyto-capsules. A bottle costs roughly $26 and should last approximately 15 days. A month’s supply hence costs $50, which is a slightly higher price than competitors’ products. The Gaia Herbs formulas can be found at online retailers and in stores. The manufacturer’s website has a Store Locator section where you can identify stores available in your area.

Mental Alertness lacks consumer reviews, unlike many of the Gaia Herb products on which numerous testimonials can be found online. This is why it is very difficult for us to assess its actual effectiveness and safety, especially since this is a dietary supplement and is not regulated by the FDA or any other state agency/organization.We may assume that the formula will achieve its declared purpose, because its core ingredients are herbs which have been credited with mental function enhancement properties by various clinical studies and scientific researches. However, we recommend that you take an extra step to ensure this is the right product for you and consult a healthcare provider. 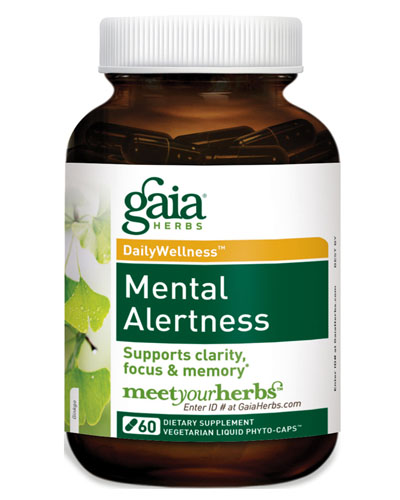 Q:
What is Mental Alertness supplement?
A:

Q:
Are Mental Alertness benefits actually a reality?
A:

Mental Alertness is a reasonably good formula with a high potential of working and achieving its advertised benefits. However, there are no consumer reviews posted online to bring clear arguments in the favor for or against the formula. The main ingredients have been extensively researched and are linked to such benefits as enhanced memory and concentration; however, the combination of herbs has not been tested as such.

I absolutely love this supplement. ADD runs in my family and I sometimes find myself lacking focus and unable to stay on task. Once I started taking the mental alertness capsules, I noticed a difference immediately. I am more focused and able to stay on task at work. I feel more energized. It has even elevated my mood and made me more comfortable when speaking with my clients. I will say this supplement may not have such strong results with everyone. I had my friend try them and he said he didn’t really feel anything. But for me, I had excellent results.

I am taking the second purchase I have done so far of this product I agree with you it is really helping me. I have been suffering from attention deficit and anxiety for long time but this product is helping me.

Tried a lot of herbal remedies before, but I am quite pleased with one. Recommend!

I just feel like a have a clear head ever since i started taking this. It’s actually quite amazing!

I am taking the second purchase I have done so far of this product I agree with you it is really helping me. I have been suffering from attention deficit and anxiety for long time but this product is helping me.