Natural Brain Enhancers is a nutritional supplement presented as a science-based nutrition that supports attention, memory, learning, assists the brain and body in reacting to stress, and facilitates growth factor action for brain circuit renewal.. The formula is offered by the company named Doctor’s Best, an American company founded in 1990 by a pioneering physician who wanted to provide the highest quality alternative health care in the form of cutting-edge nutritional formulations.

Natural Brain Enhancers features two active substances: GPC (GlyceroPhosphoCholine) and PS (Phosphatidylserine). The manufacturer states that both these ingredients are phospholipid nutrients with increased and proven effectiveness in promoting healthy brain functions. An important decision factor for combining these two elements is their complementary action that potentates their individual benefits and provides a highly effective cognitive support.

Natural Brain Enhancers is offered only for adults. It is advertised as a certified against heavy metal and pesticides formula that guarantees that the amount of impurities present in the formula does not exceed a certain allowable limit. All the formulations marketed under the Doctor’s Best brand are claimed as manufactured in US at cGMP certified facilities. However, the company does not produce itself the supplements and uses third party companies inspected and tested to comply with the high quality standards followed by Doctor’s Best.

The manufacturer does not mention any specific warnings to be considered by individuals interested in buying their formula.

GPC is advertised as an important brain nutrient used as a dietary supplement since the 1980’s. Its importance comes from the fact that GPC is one of the best sources of Choline. This is a substance known plays numerous functions in the body, including in the synthesis of neurotransmitters like Acetylcholine (a chemical that helps maintain healthy memory and cognitive function) but also in the formation of Phosphatidylcholine and HGH. The numerous benefits of Alpha GPC include: healthy memory support in all categories of individuals, superior learning kills, attention spam, mood and social skills, and healthy mental performance. Currently performed trials seem to support the brain enhancing benefits, the ability to revitalize the brain, and help the body cope with stress.The side effects associated with the use of excess amounts of Alpha GPC are gastrointestinal discomfort, restlessness, skin rashes, or heartburn.

Phosphatidylserine is a chemical produced naturally by the human body that is can be found in high concentrations in the membranes of brain cells. This is a phospholipid substance believed to act as a mediator substance in the process of obtaining Acetylcholine and Dopamine. The latter are fundamental neurotransmitters important not only for the proper brain function, but also for how the body reacts and copes with stress. PS has been shown to decline with age, which lowers the neuro-transmission effectiveness and may lead to reduced mental capabilities and mental health. A deficiency in PS has been linked with some of the most terrifying disease affecting the elder at this time: Alzheimer’s disease, dementia, and Parkinson’s disease. The initial source for obtaining supplemental PS was the bovine brain, but (for safety reasons) most of the products available on the market today contain a much less researched form of PS derived from soy. Scientists have not reached a common ground about PS complete benefits and adverse effects.

2) What Are Natural Brain Enhancers Ingredients?

GPC (GlyceroPhosphoCholine) is advertised as a new Choline derivate effective in enhancing mental function while providing long-term benefits (including brain cell protection). Choline is a popular vitamin-like ingredient of numerous nutritional supplements that address various health concerns, such as brain related affections, heart and cardiovascular problems, inflammatory conditions, etc. The cognitive benefits of this nutrient have also been supported by the existing research, which has also demonstrated the importance of the nutrients in the case of unborn babies (when taken by pregnant women) and newborns (as a supplement in babies’ formulas). GPC is a recently developed nutrient that focuses mostly on the brain-related benefits of Choline. Besides providing adequate amounts of Choline, the chemical is also a great source of phospholipids (essential building blocks essential in vital bodily processes). Like Choline, GPC has the effect of increasing Acetylcholine and Phosphatidylcholine levels. While Acetylcholine is one of the most important neurotransmitters in the brain and is obtained through Choline synthesis, Phosphatidylcholine serves as an important source of Choline. Studies involving GPS-based products seem to have shown positive results in improving attention, circulation in the brain, memory, and recall. However, the amplitude of these trials is not considered relevant by some researchers who affirm that more research is required to draw a valid conclusion regarding GPC’s Effectiveness.

Phosphatidylserine is a natural compound of cell membranes, present in the highest concentrations in the cells of the brain. Initially, the chemical was obtained from bovine brain, but due to potential disease transmission, most of the supplements today feature soy-based PS. Most of the clinical studies set out to determine PS’s memory enhancing benefits involve the bovine derived compound. The plant based product has not been sufficiently researched and may not have the same proven benefits, but it is considered a safer alternative. PS has been shown to be likely safe when used according to the recommendation of a specialized healthcare practitioner. People who are under blood thinning medication should be aware that PS based product may potentiate the effects of such drugs.

There are testimonials posted online about Natural Brain Enhancers. What is being stated includes the following:

Natural Brain Enhancers reviews are numerous and seem to be mostly positive. The manufacturer does not mention the formula’s side effects (although the active ingredients may cause some mild side effects). The maximum dose allowed is six capsules per day

4) What Natural Brain Enhancers Does?

6) How Much Does Natural Brain Enhancers Cost?

Natural Brain Enhancers formula is available in two serving sizes (10 or 60 veggie capsules). The 60 veggie capsules should be sufficient for a month’s supply (when the minimum recommended dose is not exceeded). When the maximum dose is administered (6 capsules per day), a total of three bottles are required to ensure a month’s supply, making this a very expensive supplement. The manufacturer does not offer the option of ordering directly from the official site of the company. However, a list of the nearest retailers and online retailers is available upon introducing the zip-code of a specific area. Those interested in the company’s products can choose from a list of all the Doctor’s Best partners and their contact data (address/ telephone number).

Natural Brain Enhancers is a dietary supplement based on the therapeutic effect of two complementary active compounds advertised as important ant brain nutrients at this time.

This means that a total of three bottles are required to ensure the monthly supply, making the formula an expensive product.
Although the testimonials posted online are generally positive, Natural Brain Enhancers has not scientifically been proven as effective in boosting mental performance. This leaves it to the consumer’s personal appreciation whether this would be a right formula in their case or not. However, our recommendation is to first ask a specialized healthcare practitioner and avoid self-administration. 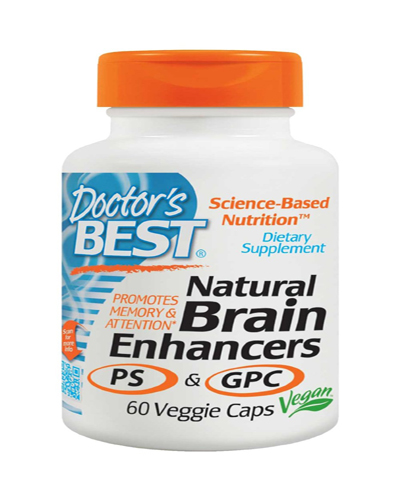 clear
Q:
What does Natural Brain Enhancers contain?
A:

Q:
Natural Brain Enhancers is all about what?
A:

Natural Brain Enhancers is a relatively simple formulation due to its composition of only 2 active compounds: GPS and PS. This may be looked at as an advantage, as reduced active chemicals may lead to increased safety and reduced side effects occurrence. Both active ingredients have been incontestably declared as essential substances for the human health. These are natural substances that are required by human bodies to perform essential functions. The memory related benefits have also been widely researched, and the benefits of GPC and PS seem to be very powerful. However, there are some precautions to be considered when deciding to use any nutritional supplement- unapproved and not medically demonstrated as suitable treatments. Complete information can be provided only by a specialized practitioner. Our recommendation is to avoid consumption of such a formula if under other medication without the consent of a physician.

Natural Brain Enhancers is a high-quality supplement that provides potent amounts of Alpha GPC . This makes it an effective product. I’ve seen improvements in my memory after the first months of use,and since then I have been enjoying the numerous other benefits offered by the formula (increased focus capacity, reduced fogginess, and better thinking skills).

This is a very effective brain supplement that is also one of the cheapest I have found. It has helped me increase my learning speed, improve mental clarity and recall. I decided to purchase it for the third time now because so far I’ve only experienced the benefits of this wonderful formula, and none of the supposed side effects!