CircuForce Brain Power is claimed to be the most effective, highest potency and best value Gingko Biloba based product on the market. The manufacturing company HealthForce brings however no argument to support these claims. The core benefits of the formula derive from its powerful antioxidant properties and include support for oxygenation processes, circulation system and brain function.

HealthForce was founded in the United States more than 20 years ago as a manufacturer of therapeutic solutions. The company strives to offer high potency and purity herbal therapeutic solutions to a number of health conditions. Today, the company manufactures and sells worldwide numerous sports nutrition formulas, green foods, dietary supplements, and cleansing and detoxification products. CircuForce Brain Power is suited for adults including vegetarians.

1) What is CircuForce Brain Power?

The formula contains a standardized extract of Ginkgo Biloba, guaranteed to contain 24% Flavonoglycosides and 6%Terpene Lactones. This level of standardization has been generally used in scientific research and clinical trials and proven both generally safe and effective. The extract contains 2 active ingredients that are believed to possess strong antioxidant and blood flow enhancement properties.The ginkgo Flavoneglycosides and Terpene lactones are two of the more than 40 chemicals found in Ginkgo, which mostly account for its properties. Ginkgo is known for its blood flow enhancing properties and for its antioxidant properties.

It is commonly prescribed in the treatment of early-stage Alzheimer’s, vascular dementia, Tinnitus (ringing in the ears), vascular claudication and other ailments potentially caused by poor circulation and oxidative stress. The herb shows promising results in enhancing memory and concentration in healthy individuals, alleviate PMS symptoms and help treat age-related eye conditions. The plant is considered generally safe but side effects such as stomach upset, dizziness, diarrhea, nausea, or headache have been reported. Also, Ginkgo may interfere with the blood’s ability to clot; hence, caution is advised.

3) What Does CircuForce Brain Power Do?

CircuForce Brain Power is a herbal mixture of Gotu Kola, Ginkgo Biloba, and Eleuthero. Gotu Kola has been used as a medicinal ingredient in China, India and Indonesia for thousands of years. It is effective in decreasing blood pressure in the veins as well as inflammation, and increases peripheral circulation. There is supportive evidence that Gotu Kola may help manage anxiety disorders, such as panic attacks or generalized anxiety disorder. Also, it seems that, as a result of increased peripheral circulation, the plant may help enhance memory, concentration, and other essential cognitive functions. Rare reports of side effects of Gotu Kola include stomach upset, drowsiness and nausea.

There are testimonials posted online about CircuForce Brain Power. What is being stated includes the following:

The retail price for CircuForce Brain Power is rough $48 for a 90 capsules bottle, which should last 45 days. A month’s supply will be hence const approximately $30, which is a rather elevated price but priced similarly to competitors’ products. Price discounts and promotional offers are almost permanently available with various retailers. The formula can be purchased from the manufacturer’s website as well as from retailers all over U.S.A and Europe.

The formula received a limited number of reviews; however, these are generally positive with consumers claiming to be satisfied. For optimum results you should consume 2 capsules a day. The manufacturer issues precautions warnings for people on blood thinning medication.

Ginkgo Biloba is a top seller in Europe in the category of medicinal herbal extracts, and enjoys a great popularity in the U.S. as well. There have been numerous clinical trials and researches conducted and its uses include a wide spectrum of ailments that mostly deal with its antioxidant and blood enhancement properties. CircuForce Brain Power appears to be a superior quality formula, although the manufacturer brings no evidence to support its bold claims. Still, we believe that the formula works to deliver its advertised benefits. Caution is advised to certain categories of patients, since Ginkgo may interfere with blood thinning medication. 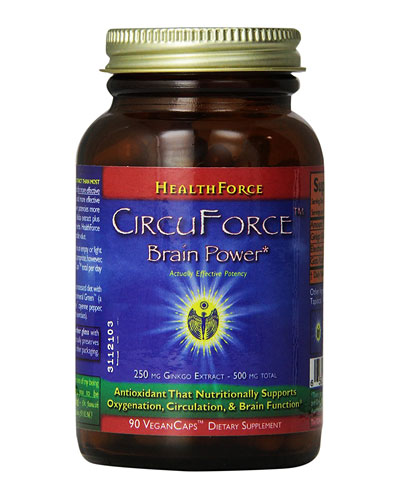 clear
Q:
What are the active ingrediens in CircuForce Brain Power?
A:

Q:
What is CircuForce Brain Power supplement?
A:

CircuForce Brain Power is a combination of Ginkgo Biloba, Gotu Kola and Siberian Ginseng designed to support oxygenation, circulation and brain function. The formula is manufactured by Health Force. Each of the main ingredients has been heavily researched. Ginkgo Biloba is one of the best sold herbal extracts today, and may assist with Alzheimer's disease, enhance memory and concentration, alleviate Tinnitus and depression related symptoms. Gotu Kola is useful with anxiety disorders and memory, while Eleuthero boosts mental and physical energy and promotes a healthy response to stress.

CircuForce Brain Power is very likely to work and achieve its advertised benefits. It contains three of the most popular herbal ingredients for brain and mood enhancement: Ginkgo, Eleuthero, and Gotu Kola. These herbs have been researched thoroughly, and many of their users are backed up by solid evidence. However, there are few consumer testimonials available, making it hard to assess the product's actual effectiveness and potential side effects. Ginkgo Biloba should be used with caution by people with blood disorders or on blood thinning medication.