IQ150 is advertised as a natural dietary supplement designed to deliver enhanced memory, retention capacity, and clarity. The formula is manufactured by SomaLife, a company that claims IQ150 is created using top scientific ingredients. However, the manufacturer brings no evidence to support this claim. The formula features nine ingredients known to enhance mental performance, including Citicoline, Turmeric root, Bacopa Monnieri, Phosphatidylserine, and Green tea extract to mention just a few. The formula is also advertised to address several other problems related to brain health including neuro-degeneration, oxidative stress, brain fog, and cross-cell communication. The ingredients are claimed to be organically grown and harvested.

SomaLife was founded in 1998 and has a reputation of a quality dietary supplements manufacturer. The company products are developed using a team of trained experts and knowledge based on years of scientific research. Particularly, the company focuses its research and development efforts in providing age management science and accordingly, products that nourish the body to stay healthy into old age. SomaLife formulates and markets a variety of condition specific products, including age management products, athletic performance formulas, vitamins and minerals and a full range of pet health products.

IQ150 can be used by adults of all ages for whom it offers optimal cognitive support.

IQ150 contain9 herbal ingredients in a formula designed to assist with specific areas of brain health.

Cognizin or Citicoline (known as Cytidine 5’diphosphocholine) is a naturally occurring compound. Citicoline is known to play two key parts in promoting brain health: firstly,it intermediates the synthesis of Phosphatidylcholine; secondly, it boosts Acetylcholine synthesis. In addition, Citicoline may work as an antioxidant, adding to its potential health enhancing benefits.

Evidence is limited in what concerns the effectiveness of Citicoline. There is preliminary evidence that the substance may increase memory, mental acuity, and mental energy in old age people who are memory impaired. The long-term safety and potential side effects are unknown. Side effects such as blurred vision, low or high blood pressure, headache, insomnia, diarrhea, and nausea have sometimes been reported.

Turmeric, best known as an Asian and Indian spice, has been revealed several therapeutic benefits as well. It has been attributed anti-oxidant and anti-inflammatory properties, while Turmeric as an ingredient may be found in products that promise to assist with rheumatoid arthritis, colitis, stomach ulcers, osteoarthritis, viral infections, Alzheimer’s disease, heart failure, migraine headaches, and mild cognitive impairment symptoms.

As stated above, this formula is advertised as a high-quality mixture of all-natural ingredients, balanced with the latest science.

The formula contains several key ingredients. Phosphatidyl Serine is one of them. This ingredient was added to ensure the integrity of the membranes of the cells of the brain. It is important to remember that human brain is 80% fat inside the cells and these cells require ongoing support of the right kind of optimal function.

Another important ingredient is the Green Tea extract. Recent studies have shown that green tea can stimulate the production of several immune substances and as the brain is part of the neuroendocrine immune system it also helps in that way, it also offers heightened awareness through the xanthines that it contains.

According to the manufacturer, this product is perfectly safe to use with no reported side effects. However, while they claim the formula to be perfectly safe, some ingredients have been associated with several unwanted side effects. For instance, Ginkgo Biloba is well known for its blood thinning properties. Therefore, everyone with blood thinning problems or under treatment with anticoagulants should avoid using any Ginkgo Biloba-based supplement.

There are testimonials about IQ 150 posted online:

5) What You Need to Know Before Taking IQ150

Each bottle of IQ 150 contains 30 capsules, which should be enough for 15 days of treatment at a recommended dose of 2 capsules per day. IQ 150 is an expensive supplement.

The manufacturer offers a free sample and free shipping if you choose to purchase this product directly from their website. IQ 150 can also be purchased from numerous online retailers, but these bonuses may not be available.

There is a very limited number of consumer testimonials posted online. The daily dose for IQ150 is 2 capsules per day.

Ginkgo Biloba, Green Tea, Turmeric, Citicoline, and Bacopa Monnieri are constituents of the IQ150, ingredients which have been scientifically studied and which can frequently be found in brain enhancing supplements. Memory and concentration are particularly targeted by such supplements and like most of them IQ150 is not researched as a mixture of elements. The fact that there are few consumer testimonials is impeding us to draw a clear conclusion regarding the formula’s effectiveness. Instead, we advise you to turn to a healthcare provider for advice and only after consulting one to make a decision. The severity of your symptoms should also be taken into account. 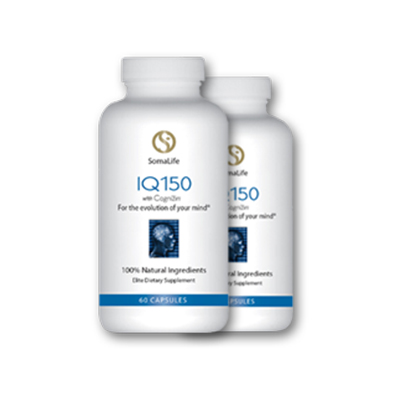 This brain supplement contains a mixture of herbal ingredients (Bacopa, Green Tea, Ginkgo Biloba, and Spanish Sage) and amino-acids (Citocholine, Phosphatidylserine, Phosphatidylcholine) and it appears to have a very good online reputation. However, our research has revealed that most IQ150 Brain Fuel supporters are also direct affiliates with the company.

The inclusion of amino acids into the formulation is welcomed but the herbal ingredients might make it difficult for this formula to go through the blood brain barrier and actually feed your brain.

IQ 150 has received numerous positive reviews and testimonials, many consumers reporting excellent results within days. However, the high price may be discouraging. The listed price is well over $100/bottle, and you will need two bottles for a full month of treatment.

The manufacturer offers a free sample for testing, which may represent a good starting point for those interested in buying this supplement. The formula appears to contain only natural and researched ingredients, and that is encouraging. Therefore, we advise our readers to research further into this supplement and, if possible, to consult with their doctor before making a final decision.