CogniSure Review – 8 Things You Should Know

CogniSure is a supplement which is primarily used for increasing your brain function, rejuvenation, and maintenance during the aging process. It has been developed by Metagenics, a company founded in 1983, with its own specialty which is the study of genes within foods, in order to find out more about ingredients and how do they work, but this is not all, they can also modify the structure of a supplement, in order to increase its effectiveness and also make it safer. CogniSure is also claimed to reduce the harmful effects of free radicals, such as pollution in our environment or cigarettes, and it also reduces the oxidative stress caused by aging, so that you will be able to age with a more relaxed and better brain function.

Every person who has gone past 40 years of age should consider trying out Cognisure, as it will help your brain in many other ways than increased cognitive function and reduced oxidative stress. There have been made some studies regarding this supplement, and the results were great, as it has the ability to increase the lifespan of cells and even animals. It is recommended not to exceed the dosage prescribed by your healthcare practitioner, in order to avoid any possible side-effects.

The only ingredient contained by CogniSure, and the only active one, is Proline-Rich Polypeptide Complex, which comes from colostrums. It has immuno-regulatory properties, which contribute to a healthier immune system. This PRP controls many important things in our body, such as cognitive development, and the activation of cells in case of an infection or wound, in which the signals are able to move much faster to the infected area in a person with a healthier mind, rather than an older one, in which the response is weaker. This process of modifying the activation of cells can be used against a severe disease, like Alzheimer’s disease. Although CogniSure may not be used as an official treatment of that disease, it still might provide some benefits. Through this active and unique ingredient, you will activate the way of healing which was intended for us naturally, before the discovery of pills and other similar forms.

3) Is CogniSure Right for You?

This product has been made using just one active ingredient, and it comes in the form of chewable tablets.

The active principle that can be found in this blend is called Proline-Rich Polypeptide Complex and is a mixture of extremely small chains of 10 amino acids or even less that have a potent effect on body health. This substance has a bovine source, coming from its milk and is said not to be species specific and works on all mammals. Also called PRP, this ingredient is said to enhance the ability of the thymus gland and helps release factors that are supposed to regulate the immune function of the body. This substance presents with potent immunoregulatory properties and has been observed to provide a beneficial effect in Alzheimer’s disease. This compound is also said to be useful in offering stress relief and can also increase adaptability. This substance is considered to be natural and safe for all ages, but pregnant or nursing women are advised not to use it.

The manufacturer states that this product is only for adults and recommends a medical consult before any use, because some mild side effect can manifest, such as anxiety, sleep disturbances, dizziness, or fatigue.

The suggested use is to chew one tablet per day, allowing it to dissolve in the mouth and then swallowing it.

There are online testimonials about CogniSure. What is being said includes the following:

6) How Much Does CogniSure Cost?

This product is presented with a high price and does not have any free trials or money-back guarantees associated with it. Each box comes with foil that holds 30 chewable tablets and has the suggested use of one tablet per day. One box provides a one-month supply. This product is available for purchase from a series of both online as well as physical retailers. The manufacturer’s website also provides a method of purchase, but only with a code that can be obtained from a medical practitioner that is in partnership with this company. The shipping prices are only available after entering the above-mentioned code.

There have not been reported any side-effects of CogniSure, simply due to the fact stated above, about how it helps us heal naturally. The recommended dosage is one tablet per day, which should be chewed and swallowed. It is strongly recommended going to a healthcare specialist in order to prevent any side-effect from occurring.

CogniSure contains a great formula, with only one active ingredient, which is Proline-Rich Polypeptide Complex. It has many therapeutic properties regarding the immune system and brain function, as it enhances your brain during the aging process, allowing it to function properly despite the action of free radicals, because it reduces the oxidative stress, and it the harmful effects caused by these free radicals. There are no better alternatives, since the only product that contains this formula other than CogniSure also belongs to Metagenics. Keep this supplement away from children or pregnant women, as it may cause side-effects or unwanted results. 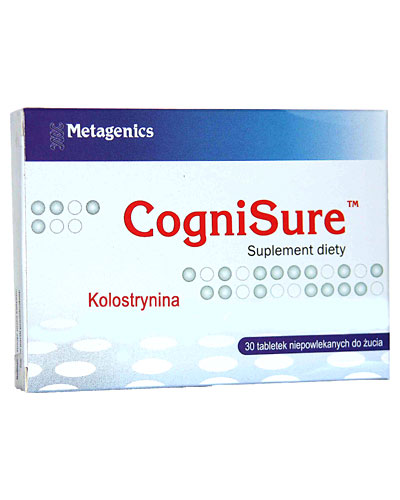 clear
Q:
What are the active ingrediens in CogniSure?
A:

Q:
What is CogniSure?
A:

CogniSure is a product which was developed by Metagenics, a company founded in 1983 in California. They study the genetic side of foods, through which they can find out what our nutritional needs in order to extract and use specific substances for specific therapeutic purposes. The company can also modify the genes of certain ingredients as a method for increasing their effectiveness. CogniSure is marketed to act as a barrier against free radicals resulted from pollution and other factors while also rejuvenating the brain.

Q:
Are CogniSure benefits actually a reality?
A:

CogniSure is said to be a natural chocolate flavor dietary supplement that comes in a chewable form and aims to sustain the brain during aging and also support a series of mental abilities. In this product, we can find only one active ingredient, which is relatively well researched and considered to be safe. The manufacturer has a 30-year experience and is a well-respected international business. The price of this formula is quite high, and there are no free trials or money-back guarantees available.