MAX-Q10 Review – 8 Things You Should Know Before You Buy

MAX-Q10 is sold an over-the-counter supplement recommended as a highly potent energy booster due to a patented clinically proven form of Co Q10. The formula is manufactured and marketed by the American producer Stop Aging Now, a company with an international activity in the nutritional supplements industry since 1995.

MAX-Q10 is advertised ad made with the highly bioavailable Kaneka Q10, a form that is most commonly used in the clinical trials conducted so far. This is claimed as bio-identical to the CoQ10 produced naturally within the body, which makes it a more potent and safe product. Also, the fact that the active ingredient is natural makes it more readily absorbed as compared to synthetic based supplements.

The other active extract is a patented form of black pepper (BioPerine) standardized to contain 95% piperine. This standardized compound has been allegedly shown to increase Co-Q10 absorption by over 30%. The formulation is available in three different forms: soft gel, capsule, and chewable. At the moment, only the soft gel form includes the standardized extract BioPerine.

The formula is suited for adults who are not currently on any other medication, except pregnant and nursing women. The safety in these cases has not been fully evaluated, so getting professional help is the recommended option.

CoQ10 is a naturally occurring substance involved in the processes of energy production in the mitochondria. CoQ10 levels have been noticed to decline after the age of 30, and by the age of 70, the levels of this essential nutrient reach critically low levels, resulting in numerous health concerns (cognitive and cardiovascular diseases, increased risk of cancers, etc.). A proper supplementation with this substance may help prevent or delay the installment of the symptoms associated with these conditions. Research involving CoQ10s targets a broad spectrum of conditions including in the treatment of various cancers (breast, prostate), hepatitis, over-weight problems, Parkinsons and Alzheimers disease, muscle conditions and movement disorders (resulted from damage to the nervous system), etc.

Early evidence suggests that the use of CoQ10 has been effective only in the case of certain health concerns, mostly to reduce memory problems associated with aging, treat gum disease, and prevent or alleviate some of the symptoms of heart disease). There is no strong evidence that CoQ10 is effective as a stand-alone treatment or in combination with traditional medicine in many of the health claims attributed to the compound. Some of the adverse reactions associated with CoQ10 are nausea, stomach distress, vomiting, and adverse skin reactions. The compound has been shown to lower blood pressure, so people who have such health problems or are taking medication designed to lower blood pressure should be aware of the potential unwanted effects caused by the use of a CoQ10 supplement.

MAX-Q10 features a single main active ingredient called Coenzyme Q10. This is a chemical that is naturally produced in the human body and is virtually present in every human cell. The substance is present in larger amounts in organs like liver, brain, and heart, due to their high vascularized structure. The main function of the coenzyme is to facilitate energy production in the mitochondria. It is considered one of the most important natural antioxidants in the body, its potential benefits being researched in a large number of clinical trials throughout the years.

As an antioxidant, CoQ10 helps protect essential organs against the irreparable damage that caused by oxidative stress at a cellular level and helps the body to reduce the reach of free radicals action. Its powerful properties have made CoQ10 a popular ingredient of beauty products recommended for reducing wrinkles, and other aging signs of the skin and even preventing skin aging.

However, levels of CoQ10 have been observed to decrease with age, which is why proper supplementation is highly recommended after reaching a certain age, as a way to support declining levels of the nutrient and prevent unwanted effects of a deficiency in CoQ10. Some of the most severe signs of such a shortcoming are high blood pressure, chest pain, heart failure, age-related macular degeneration and cataracts (eye diseases), memory loss and cognitive decline, fibromyalgia, and others. However, the evidence so far is promising (still inconclusive) in the case of only a few conditions such as Alzheimer’s disease, Parkinson’s disease, skin problems, and to some extent in the treatment of certain heart conditions

There are testimonials posted online about MAX-Q10. What is being stated includes: I am very pleased with this product. It was received on time and carefully wrapped which kept my pills very fresh. I’ve been taking Max Q10 for almost a month, and I do feel stronger, and mind seems to be clearer/The chewable tabs are much easier to deal with than are the giant gel caps. I’m a firm believer in CoQ10 and am quite happy with this product./ I Purchased a three pack and when I realized I had to wrong item (my fault) I was given a refund with no problem, no questions.

MAX-Q10 reviews are not numerous but seem to be positive. The suggested dosage varies depending on the form purchased (soft gel, capsule or chewable). The dosage recommendations can be consulted on the official page.

MAX-Q10 formula comes in three different forms: soft gels, capsules, and chewable tablets. Each version is available in a one month’s supply bottles (30 capsules, 30 soft gels and 60 chewable). The manufacturer offers discounts for purchasing multiple bottles (3 or 6) or for the customers who subscribe to the auto-ship program available also in 2 options (3 bottles shipped every three months/6 bottles shipped every six months). The best price available is that of the auto-ship program every six months.
The formula also benefits of a 365 days money-back guarantee, available for all of the products marketed by Stop Aging Now. No free trial period is available.

MAX-Q10s side effects are not specifically indicated (but may be similar to those of the main active substance).

The MAX-Q10 formula is advertised as a superior CoQ10 based formulation available in three different forms, to suit the different needs of its consumers. The official page of the formula provides enough information about the numerous potential benefits resulted from consuming such a supplement, the source of the active ingredients and the products distinctive features. The web page also provides a section with testimonials from clients who have tried the formula, suggesting that this supplement is effective in improving thinking and memory. However, the number of relevant testimonials is rather limited at the moment of this review.

Although the active ingredient is advertised as a clinically researched and proven an effective product, Max-Q10 is not a clinically researched formula itself. More so, certain unwanted effect may occur if used improperly or by people under certain medication. To avoid the occurrence of unwanted reactions, it is best to inform a specialized practitioner before starting using the formula. 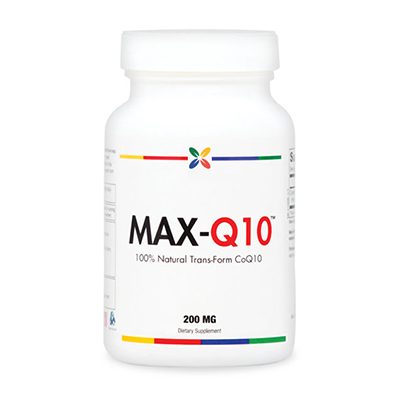 MAX-Q10 dietary formula is an antioxidant supplement advertised as a proper support for maintaining healthy cognitive and cardiovascular systems and optimal energy levels for its users. The manufacturer of this supplement is Stop Aging Now, an American company founded in 1995.

CoQ10 is a very popular supplement due to its numerous potential benefits on the overall health. However, so far, there is no science resulted evidence sufficient for many of these claims. Positive results have been observed when CoQ10 was used to improve memory function in the elderly and protect the cardiovascular system.

Q:
Are MAX-Q10 benefits actually a reality?
A:

The max-q10 formula is offered as a natural antioxidant support suitable for adults who have reached the age of 30 and are interested in maintaining optimal levels of an essential nutrient for cellular energy production. The formula distinguished itself by the active compounds both advertised as patented products with enhanced therapeutic properties and increased safety. The formula is advertised to include the only CoQ10 made in the USA, which is also the most researched and trusted form of the coenzyme worldwide. The formula is also available in three different forms to meet the consumer's various needs and preferences.

However, there is no actual evidence of a clinical trial involving the blend featured by MAX-Q10. The only guarantee of the formula's efficacy is the manufacturer's reputation and the good reviews coming from people who have experienced the formula's benefits. The best way of finding if this formula suits the individual needs of a certain consumer is by asking a specialized healthcare professional.

MAX-Q10 helped me think clear again and improve my memory. I also noticed that my skin looks brighter and cleaner. I love it!

I love this formula because it is a high-quality product based on a clinically proven effective extract. I recommended to all those who seek a pure and natural CoQ10 supplement.

I would like to start this supplement
What strength of gelcaps would I
take? There are different strengths over the counter.
I am 74 and very healthy.

We recommend starting with the lowest dose and increase if needed.

this product is advertised at 14.95$ on th joshua site. but its almost 30$ on amazon incl postage. its the trans form brand.

I’ve been taking Max-Q10 for sometime and was going to order the Max Q10 Ultra . After reading the above I am hesitate to order more as my blood pressure seems to going down more and more. My cholestrol is a little on the high side and I take Red Yeast Rice but thought taking the Q10 would help. Your thoughts would be appreciated.
Thank you