Lutein, from California supplement company Jarrow Formulas, promises to support health in all parts of your vision. The company has extensive experience – decades of it – working with dietary supplements and ingredient essential for proper nutrition. They combine modern science with traditional medicine, like many other supplement companies. But Jarrow has a large audience, has been around a very long time, and has won more awards than the average supplement company. Their good reputation seems well earned.

1) Lutein at a Glance

Each capsule has 20 mg lutein and 1 mg zeaxanthin, both extracted from marigold flower petals. Both are antioxidants found in various plants, foods, and the human eye. In the latter, it’s specifically the lens, retina, and macula. It’s thought that they protect your eyes from harmful light waves and certain types of eye diseases like cataracts. Several studies point to the effectiveness of lutein and zeaxanthin, especially with a balance of vitamins and minerals, in maintaining healthy vision. Zeaxanthin isn’t as well studied as lutein so it needs more research before aggressively promoting its benefits.

2) What Are Lutein Ingredients?

3) Does Lutein Work and it is Safe?

Servings contain 20 mg lutein and 1 mg zeaxanthin. Lutein is sometimes called “the eye vitamin” because of its relation to vitamin A and beta-carotene. Sources high in lutein include spinach, kale, and some fruits. The recommended daily amount is 10 mg, which some people get just from their regular diets. Just one cup of cooked spinach contains 26 mg of lutein.

Zeaxanthin is a substance found in many plants, especially the leaves of green ones. It gives color to some peppers, corn, saffron, carrots, and other things we eat. It’s also found in our eyes, alongside lutein (although mostly in different parts), and higher concentrations of both are thought to be essential to having good vision. However, the medical benefits of zeaxanthin are not considered completely proven. There aren’t any known side effects at least in concentrations of up to 20 mg a day but its inclusion in dietary supplements requires more research.

Jarrow Formulas says lutein and zeaxanthin are clinically proven in regard to eye support, but the study they link to doesn’t explicitly say that. Even the studies which are more certain about the benefits call for further studies to be done. Many studies which find benefits for lutein and zeaxanthin included vitamins or other nutrients, which might have impacted the results. Although in general, a balanced diet is important to stay healthy, and that’s why supplements are important too.

Each bottle lasts for about two months. This means it’s an inexpensive buy even at full MSRP, although you can likely find it for a lot less money online or in a local store. It’s hard to go wrong when the price is this low for a good product.

There isn’t an official recommended daily allowance (RDA) for lutein or zeaxanthin. The American Optometric Association recommends a serving of 2 mg a day for zeaxanthin, and 10 mg a day for lutein. Most studies have used doses of 10 to 20 mg of each ingredient without ill effects. Mostly these nutrients are studied in relation to treatment or prevention in diseases like cataracts and age related macular degeneration (AMD). It might be most effective in people over the age of 50, although its general benefits aren’t well known for people of all ages.

The overall reaction to Lutein is good, as hundreds of people who’ve used the product have left positive reviews. Some people do say that it didn’t have a clear effect on their visual health, but results seem to vary widely. Natural variation in human biology and diet is likely responsible for this. If you’re only consuming 1 to 5 mg of lutein a day, this will definitely be a product for you. Your doctor may also recommend a product like this if they feel it’s best. There is definitely some evidence to show that lutein and zeaxanthin can do a lot to protect your eyes from cataracts and age related mascular degeneration (AMD). 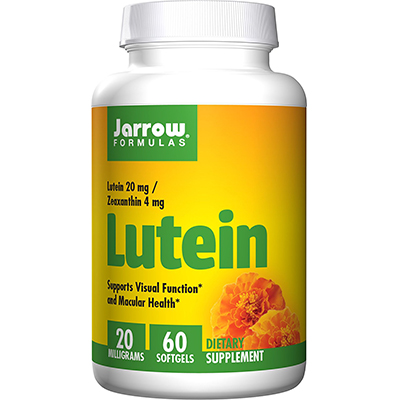 clear
Q:
What does Lutein contain?
A:

Many studies agree that lutein and zeaxanthin are important for maintaining your health, especially in regard to vision. Jarrow's formula might be slightly untuned. Since we get lutein from various foods, supplements of only 10 mg are often fine. This does vary from person to person and 20 mg might be good for you. Zeaxanthin, on the other hand, more is usually recommended than what's included here. As little as 2 mg a day works, although some studies use as much as 10 to 20 mg zeaxanthin daily. Results will vary from person to person. The price is still excellent and the benefits are more long term. Like some other nutrients, you may not see results immediately, but they're working toward a healthier future for you.