Liquid Chlorophyll is a nutritional supplement designed to support the natural blood-cleansing process for cleaning the body and maintaining several vital systems such as the circulatory, intestinal, and female reproductive systems.

Nature’s Sunshine, the manufacturer, is an American-based company founded in the 1970s as a family business. At first, the company sold encapsulated cayenne for the ailment of stomach problems. Today it has extended its activity to over 30 countries and is present in approximately 600,000 retailers.

This formula is based on Chlorophyll, the green pigment from plants that is the correspondent of blood for humans. This molecule is chemically similar to human blood, but instead of having iron as the central atom, it has magnesium.

Liquid Chlorophyll is claimed to be efficient in eliminating toxins from the body, neutralizing natural body odors, acting as an internal deodorant, and improving the immune system. The formula is an alpha-extract stabilized by replacing the central atom (magnesium) with sodium and copper. Copper is needed for the proper functioning of human cells, and Copper deficiencies result from the body’s inability to use iron and protein. This causes emotional and mental instability, impaired respiration, low energy, and skin sores.

Liquid Chlorophyll is an herbal-based dietary supplement. The main active ingredient is Chlorophyll, the green pigment found in plants. Through photosynthesis, it allows the plant to absorb the necessary energy to feed and grow.

Liquid Chlorophyll is often used as a food additive and colorant for different foods and beverages. In alternative medicine, it is used as a body odor remover to treat constipation and increase oxygen levels in the blood. However, there is no reliable evidence of any clinical research which supports any of these claims. Moreover, it has been shown that the substance cannot enter the blood and its structure is not similar to hemoglobin as stated, but to a component of the red cells called haemin.

Chlorophyll is considered potentially safe if taken orally and may be potentially effective in reducing the symptoms and pain associated with chronic pancreatitis. It may also cause extra skin sensitivity when exposed to solar light.

The intravenous administration of chlorophyll-based formulas is not recommended without the help of a trained medical professional, and there is not enough information about the use of this substance during breastfeeding or pregnancy.

Sodium copper chlorophyllin (SCC) is a water-soluble mixture obtained from natural Chlorophyll. It is claimed to have potential antimutagenic (capable of reducing mutation frequency) and antioxidative properties.

Some of its claimed benefits include:

3) What Does Liquid Chlorophyll Do?

Liquid Chlorophyll is produced from green plants, which are a great source of Chlorophyll and other nutrients that can be effectively used to cleanse the body of toxins.

Chlorophyll is the pigment that gives plants their natural green color. This molecule is essential for photosynthesis as it absorbs sunlight and uses its energy to synthesize carbohydrates from CO2 to water. Only recently have scientists begun studying its effects on the human body when ingested.

This substance appears to detoxify the liver and help clean the digestive tract but can also have unpleasant side effects. Scientists state that Chlorophyll may enhance energy, eliminate body odor and bad breath, cleanse the gastrointestinal tract, help with anemia and detoxify the liver.

Preliminary evidence points to the fact that this compound can play a role in preventing certain cancers. Unfortunately, some people may experience diarrhea, upset stomach, and stool or urine discoloration as side effects of taking chlorophyll supplements.

4) Side Effects of Using Liquid Chlorophyll

There are a few side effects associated with chlorophyll, an active ingredient in this product, which include nausea, abdominal discomfort, and vomiting.

5) Where to Buy Liquid Chlorophyll

You can purchase Nature’s Sunshine Liquid Chlorophyll on the Company website or select online retailers like Amazon.

6) How Much Does Liquid Chlorophyll Cost?

A 30-day supply of Liquid Chlorophyll costs $23.90 for the Extra Strength and $34.90 for the regular strength.

It can be purchased directly from the manufacturer or numerous other retailers with several discounts and a money-back guarantee in case you are not pleased with the product.

Stir two tablespoons or one tablespoon (for the extra strength formulation) daily in an 8 oz glass of cold water and drink.

Nature’s Sunshine Liquid Chlorophyll features Chlorophyll – the green pigment in plants responsible for harvesting the sun’s energy in photosynthesis. It is a formula designed to naturally support the circulatory and immune systems, strengthen cells, and detoxify and deodorize the body.

The main active ingredient is represented by the base cellular form of plants, which has been compared to human red blood cells. Scientific studies revealed insufficient evidence of the effectiveness of chlorophyll-based products in treating most conditions.

Although further research is needed to establish its benefits, Liquid Chlorophyll has received excellent reviews regarding its effectiveness in reducing body odor and boosting the immune system.

Liquid Chlorophyll has gone through thorough quality and purity tests, and product reviews have shown it to be easy to take and effective.

Nevertheless, this product is not intended to diagnose, treat, cure or prevent any disease. 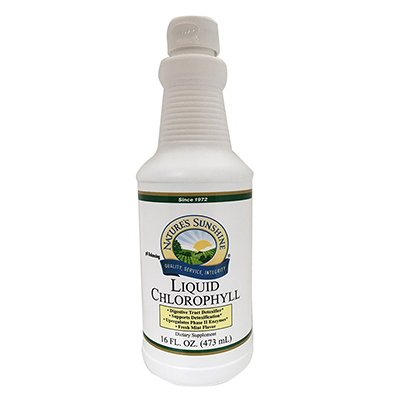 clear
Q:
What does Liquid Chlorophyll contain?
A:

Q:
What is Liquid Chlorophyll?
A:

Nature’s Sunshine Liquid Chlorophyll is a dietary supplement that serves as a digestive tract detoxifier that boosts energy and the overall well-being of the body system.

Q:
What are the Liquid Chlorophyll side effects?
A:

There are a few side effects associated with chlorophyll, an active ingredient in this product, which include nausea, abdominal discomfort, and vomiting.

Q:
Where can I buy Liquid Chlorophyll?
A:

You can purchase Nature’s Sunshine Liquid Chlorophyll on the Company website or select online retailers like Amazon.

Q:
How much does Liquid Chlorophyll cost?
A:

A 30-day supply of Liquid Chlorophyll costs $23.90 for the Extra Strength and $34.90 for the regular strength.

Q:
What are the benefits of Liquid Chlorophyll?
A:

Taking Liquid Chlorophyll can help you have a healthier gut, immune system, and general body system.

Q:
Does Liquid Chlorophyll work?
A:

Although there is not much scientific evidence to support the use of chlorophyll in the cleansing of the body, we were able to find many positive testimonials about this product posted online that claim that it is effective.

Q:
How do I know if Liquid Chlorophyll is right for me?
A:

Suppose you're looking for a natural supplement to help you detoxify your body, support your immune system, and improve your overall well-being. In that case, Liquid Chlorophyll may be an excellent choice to help you achieve that.

Q:
How should I take Liquid Chlorophyll
A:

Stir two tablespoons or one tablespoon (for the extra strength formulation) daily in an 8 oz glass of cold water and drink.

Q:
How do I contact Liquid Chlorophyll customer service?
A:

Q:
Can I return Liquid Chlorophyll?
A:

Return options for Liquid Chlorophyll may vary by retailer.

Q:
What do Liquid Chlorophyll reviews say?
A:

There are testimonials posted online about Liquid Chlorophyll. What is being stated includes:

Q:
Who makes Liquid Chlorophyll?
A:

My whole family uses Liquid Chlorophyll to boost their immune system especially in the cold season when the probability of getting a cold or flu is rather higher. I am completely satisfied of how it has worked for us so far.

I like it because it has a good taste; it is cheap and has shown to be an effective way to reduce the nasty odor caused by hard training at the gym.