Acetyl L-Carnitine is a nutritional supplement designed to support memory and brain function, increase the sense of well-being, enhance mood and relieve feelings of fatigue. The core benefits claimed for the formula are the help in energy production, in maintaining a healthy nervous system and healthy neurological processes, in reducing mood swings and maintaining a healthy mental function and brain.

It is developed by Herbs of Gold, a company founded more than 20 years ago and headquartered in Kirrawee, Australia. The manufacturer is specialized in researching, developing, manufacturing and marketing herbal supplements combined with the vitamins, nutrients and minerals required to maintain an overall good health or to treat/prevent specific conditions.

Acetyl L-Carnitine is advertised as a source of the naturally occurring amino-acid Carnitine, in a more potent and effective form, Acetyl-l-Carnitine.

The product is designed for the use of adults only. The formula is also suited for vegetarians.

Acetyl L-Carnitine is a single ingredient amino-acid based supplement. The formula does not contain any added egg, milk, peanut, corn, soy, tree nut or animal products, gluten, lactose. Additionally, it is free of artificial colorings, flavorings or preservatives.

Acetyl L-Carnitine is a form of Carnitine, a compound naturally produced and regulated by the kidneys.
The main function of Acetyl-L-Carnitine, as with all Carnitine, is to facilitate fat to be used as fuel in the energy production processes by transporting fatty acids to the mitochondria, the power plant of the cell. Also, the acetyl group attached to L-Carnitine is essential for the production of the key neurotransmitter Acetylcholine, making Acetyl-L-Carnitine a potential treatment for disorders such as depression, ADHD and Alzheimer’s disease. Also, clinical tests have showed it to have positive effects on maintaining healthy mood and assisting in the management of mood swings.

The suggested dose is 2 capsules taken once or twice daily with food or as directed by an informed healthcare professional.

2) What Are Acetyl L-Carnitine Ingredients?

3) What Does Acetyl L-Carnitine Do?

In its quality of a single ingredient amino-acid based supplement, Acetyl L-Carnitine should not contain any added milk, soy, peanuts, egg, gluten, tree nut, or animal products. Also, it is claimed as free of flavorings, preservatives, and artificial colorings.

The only ingredient found in this remedy, Acetyl L-Carnitine represents a form of Carnitine, a component which is naturally produced and afterward regulated by the kidneys. Its primary function is facilitating the energy production processes by helping transform fat into fuel for the human body. Also, the acetyl group from L-Carnitine is essential in the creation of the key transmitter acetylcholine. Thus this amino-acid can be used as a potential treatment when it comes to disorders like: ADHD, Alzheimer’s disease, and depression.

Clinical tests have proved that it may have positive effects on maintaining a healthy mood because it assists in the management of mood swings. Suggested daily use for this product is two capsules per day, with food and water.

Acetyl L-Carnitine hasn’t been intensively researched, but the active ingredient from its formula has been involved in a variety of laboratory tests. Even though manufacturers haven’t mentioned the side-effects related to this remedy’s consumption, there are a few that can occur when Acetyl L-Carnitine is taken on a daily basis. Some of these side-effects are vomiting, restlessness and upset stomach.

There are no online customer testimonials about Acetyl L-Carnitine. Therefore the effectiveness of this remedy can’t be stated.

4) What Acetyl L-Carnitine Does?

5) What You Need to Know Before Taking Acetyl L-Carnitine

Acetyl L-Carnitine is sold by bottles containing sixty vegetarian capsules. A bottle is sufficient for a month’s treatment. The remedy can be purchased either from manufacturer website or other online retailers. When bought in larger quantities, retailers usually offer promotions and discounts.

Acetyl L-Carnitine is not a researched formula, but the active ingredient has been involved in a large number of clinical trials. Side effects are not mentioned by the manufacturer, but Acetyl-L-Carnitine may cause nausea, vomiting, restlessness and stomach upset. People with a history of seizures and pregnant and nursing women should consult their doctor prior to use.

It is advertised as a solution for people concerned with their proper brain and mental functions, since the benefits of Acetyl-L-Carnitine are known to be greatly exercised in this particular area. Its benefits extend to a variety of affections and disorders affecting the nervous system and cognitive function, from memory related issues, physical and mental fatigue to reproductive related disorders (Acetyl-L-Carnitine is known to play an essential function in sperm production).

The manufacturer doesn’t mention any interactions with other medicine or categories of patients who should avoid use, although clinical tests on Acetyl-L-Carnitine have identified such groups.They do however advice consumers to consult a healthcare practitioner if any symptoms persist after taking Acetyl L-Carnitine. 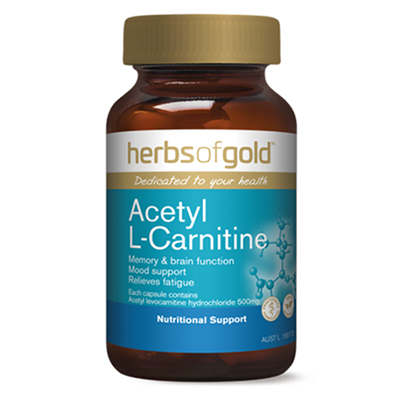 clear
Q:
What are the core ingredients in Acetyl L-Carnitine?
A:

Q:
What is Acetyl L-Carnitine supplement?
A:

Q:
Are Acetyl L-Carnitine benefits actually a reality?
A:

Acetyl L-Carnitine represents a dietary supplement based on a single ingredient that gives its name. It is recommended for adults who desire an overall improvement of their bodies. The product's main benefits are: relieving feelings of fatigue while enhancing the mood and offering an improvement in the general well-being.

Even though the side effects of this particular product have not been specified, consumption of Acetyl L-Carnitine on a daily basis may lead to some. Thus it is important for people to be careful with the label description. Due to the fact that this is a supplement, it should be balanced with a healthy lifestyle to obtain proper results.

I’ve tried it and I am not satisfied, no energy boost.

My memory got better after just three weeks, I feel great.