Green Tea Review – 8 Things You Should Know Before You Buy

Green Tea is advertised as a dietary supplement designed to act as a daily tonic and enhancer of brain, heart and immunity functions. The business that delivers the product at international level is known as Alfa Vitamins.

They have been members of the nutritional field since 2000. Their establishment was set in Doral City, Florida, the United States where they have a facility that expands on more than 150.000 square feet. From this area, approximately eighty seven thousand square feet are air-conditioned in order to preserve the ingredients at optimum quality. Furthermore, they state that their quality processes are ensured by the GMP certification and Standards of Operations Procedures. These quality processes are supervised by a team of 12 professionals including chemical engineers, analysts and pharmacists. They currently sell a wide array of products which are advertised for specific health conditions.

The formula uses a single ingredient with qualities that have been researched throughout the past years, Green Tea. Despite the fact that there are more ways in which Green Tea can be delivered to the organism, this company chooses the encapsulation approach because they considered it superior in terms of effectiveness and absorption.

Green Teais mainly suggested for adults who lead stressful and demanding lives, but can also be consumed by elders who need a natural enhancer or children whose parents are concerned because they may not receive basic bodily requirements from their diets.

1) Green Tea at a Glance

Green Tea represents a dietary supplement meant to enhance immunity, cardiovascular system and give a boost to mental alertness and other cognitive functions. The manufacturer even suggests that it can be taken as a daily tonic due to some properties that the core ingredient has.

The product features a single ingredient which actually gives its name. It is generally obtained from the leaves of Camellia sinesis which have undergone the lowest oxidation while processing. Although it originates in China, the plant has rapidly become associated to other Asian cultures as well and gained popularity in Europe and USA.

The herb is usually included in supplements meant to enhance thinking processes and memory. Because it contains caffeine in proportion of 2:4, it improves the function of brain messages which are important to preventing a series of disease related to cognitive functionality, such as Parkinson’s disease. Although research studies are still being conducted, the ingredient have proven reliable through a series of tests. Additionally, this component improves the cardiovascular system because it offers antioxidants and other substances that protect blood vessels and the heart.

Green Tea is promoted as a dietary supplement that focuses on giving a natural boost to people when it comes to their immune, cardiovascular and cognitive systems.The manufacturer doesn’t specify the main function that this product should have within the organism, but rather lists a broad spectrum of potential benefits.

The core and only component of this formula are Green Tea. Obtained from Camellia sinensis, a plant that originates from China, it has been used by people for thousands of years because of the overall beneficial impact that it has on the human body. The nutritional industry has included it either as a primary or additional ingredient in a wide array of products that range from creams to capsules or tonic beverages.

Research shows that the most reliable property of this ingredient is linked to the enhancement of thinking and mental alertness. These qualities are explained through the presence of polyphenols. Polyphenols are a series of relevant molecules that may be able to protect cartilage, prevent swelling and inflammation, and sometimes even lessen the degeneration of joints. Furthermore, it was revealed through some tests that these molecules have the potential to fight HIV infections and decrease the pace in which abnormal cells in the cervix are developed. Although research is still required, this ingredient has proved useful in several of the above-stated cases.

On a general level, this ingredient is viewed as safe to consume, but if the dosage is massively exceeded, it causes a series of side effects because of its caffeine content. These side effects include nervousness, vomiting, irritability, and dizziness.
There are online customer testimonials about Green Tea. What is being reported includes: : generally I’ve been taking this to improve my memory, and I’m quite satisfied” and “I’m 50 years old, and I require nutritional supplements to help me get better through the day. I can say this supplement works for me.”

5) What You Need to Know Before Taking Green Tea

This su isfound in bottles that contain 60 capsules. Because the daily recommended dosage is of one capsule per day, a bottle should be sufficient for approximately two months of usage. An interesting feature of the manufacturer’s company is that they give a series of redemption points which help the customer reduce his or her costs in other future acquisitions.

The supplement can be ordered either directly from the producer or from other online distributors. As it was previously mentioned, they have retailers almost anywhere in the world, which should facilitate the purchase. The price is affordable, particularly considering other similar supplements found on the market.

Green tea is viewed as likely safe for the majority of adults. However, there are some individuals that may experience constipation and stomach upset. Moreover, there were some cases in which people reported developing Green Tea side effects like liver problems as a result from long-term use.

Created by a well-known company that has been on the nutritional market for more than fourteen years, Green Tea promises to deliver the proper amounts of its core ingredient on a daily basis. It comes in an easy-to-use capsule form that facilitates its use. On a general level, it should have a positive impact on the organism, with particularities linked to the cognitive, cardiovascular and immune systems. Because of the quantities included, it may prove reliable in treating symptoms related to some memory or thinking diseases such as Parkinson’s disease.

However, research is still in development and there is no general conclusion at the moment. Although it is mainly suggested for stressed adults or elders who require a daily boost extra to their daily diets, it can also be consumed by children. Parents who decide to give Green Tea to their children should consult a personal healthcare provider prior to beginning doing so. 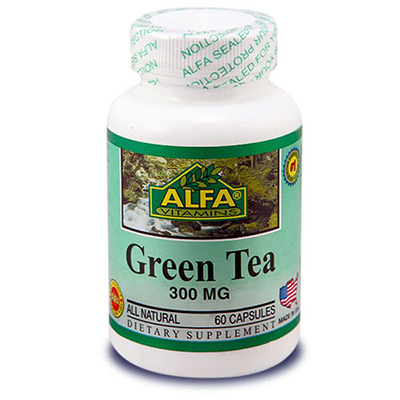 Q:
Green Tea is all about what?
A:

Green Tea is a dietary remedy that was created to enhance a wide array of bodily regions, including cardiovascular, cognitive and immune systems. It is a product offered by the company called Alfa Vitamins. This supplement features a single ingredient, Green Tea which has been intensively researched and included in a variety of products meant to improve overall well-being. According to some studies, Green Tea may exhibit is benefits for mental alertness, thinking issues as well as cardiovascular functionality due to anti-oxidant effects.

It is viewed as safe, but some individuals may experience certain discomforts and side-effects that include dizziness, stomach cramps and nausea. Although the manufacturer doesn't specify it, the product should only be consumed by pregnant females and children after a visit to the personal healthcare provider.

Q:
Are Green Tea benefits actually a reality?
A:

Green Tea represents a good addition to a healthy diet for individuals that desire to include this ingredient on a daily basis because of its beneficial effects. As research showed, there is a wide palette of bodily regions that are positively affected. However, the cognitive, immune, and cardiovascular systems are among the most important.

Despite the fact that this ingredient has been included in a series of products that vary from lotions to tea bags, there are some who believe the best way in which it is absorbed by the body is through the consumption of capsules. It is a product that can be used by vegans and vegetarians because it features no animal traces. However, as with most nutritional supplementation forms, children and pregnant women should consult a personal healthcare provider.

I think this product is quite good. I had some concentration issues at the work place and I definitely had to do something about it. Chatting one morning with a friend, she recommended me this supplement and told me it\’s a reliable nutritional firm. I initially doubt it.. because I don\’t really trust this type of products, but oh man.. did this prove wrong in the end. I\’ve started two months ago and since then.. I can say my life has changed for good. I would recommend it to others too.