Ginkgo Concentrate is a ginkgo biloba extract which says it will support healthy cognitive function and boost memory. The product only contains one active ingredient, ginkgo leaf extract, and is sold by Life Enhancement. The Nevada company is known for a diverse array of supplement products, including nutritional drink mixes. They also publish their own magazine, the self described “first source for practical scientific health news from around the world.” Since they’ve existed since 1985, Life Enhancement has a wealth of information and products to serve a variety of nutritional needs.

Despite its extreme longevity in medicine throughout human history, there aren’t a lot of studies on the effectiveness of ginkgo biloba. It may boost cognitive function in people without known cognitive problems, and that’s main selling point in supplements. Most research deals with studying concentrated ginkgo in older adults, and it does seem to be very effective in some areas. Alzheimer’s and cognitive decline can be lessened. There can be minor improvements in general cognition, blood flow, sleep quality, and more.

3) What Does Ginkgo Concentrate Do?

Capsules each contain 120 mg of ginkgo leaf extract. Ginkgo biloba is generally regarded as the most ingested herb for brain health. It’s a nootropic and makes frequent appearances in traditional Chinese medicine. Some people have even used it as food; the nuts are popular in China in small amounts.

Typical doses are 120 to 240 mg a day. Higher doses are used, up to 600 mg daily in some circumstances, but it’s thought that this is just as effective as a dose in the 120 to 240 mg range. Medically, a highly concentrated ginkgo leaf extract called EGb 761 is used instead of a general ginkgo extract. Eleven studies show that it’s notably effective as a therapeutic option in alleviating cognitive decline. 12 studies show how it increases short term memory capacity in individuals over the age of 55.

Ginkgo should be taken with meals because of the potential side effects from taking ginkgo. Most are mild, ranging from headache and dizziness to constipation and increased heart rate. It also has some blood thinning properties, so ginkgo shouldn’t be used by pregnant women or people taking certain medications. If you’re allergic to plants like poison ivy and poison sumac, ginkgo can sometimes cause allergic reactions. This is usually from leaves coming into contact from the skin, but concentrated leaf extract can also do it.

4) What Ginkgo Concentrate Does?

5) What You Need to Know Before Taking Ginkgo Concentrate

6) How Much Does Ginkgo Concentrate Cost?

Each bottle is about a one month supply. Directions suggest to take 1 capsule 3 times a day, and bottles contain 90 capsules. This is a typical daily regimen with ginkgo, and most people will be satisfied with taking up to 3 capsules every day. Ginkgo Concentrate from Life Enhancement is very inexpensive given the benefits it may have for you, and is one of the least expensive supplements on the market today.

7) How to Take Ginkgo Concentrate

Every capsule contains 120 mg of ginkgo. Bottles recommend you take 1 to 3 a day. 120 mg is a very common serving size, and taking 1 to 2 capsules a day could do wonders for your mind and body. People report all sorts of benefits with ginkgo extract, especially those who are getting up there in age. If your doctor recommends it, you may want even more ginkgo in your daily diet. Sometimes they’ll say you should use a highly concentrated ginkgo leaf extract called EGb 761 instead of regular ginkgo extract.

8) Our Verdict on Ginkgo Concentrate

This product is a little light on reviews and testimonials, although it’s well received. Life Enhancement is regarded as a reliable company with a commitment to high quality supplements. A great deal of their products, including Ginkgo Concentrate, work best on adults over the age of 50. Their supplements can provide a lot of benefit to people of all ages, but older adults are best served with Life Enhancement’s products. Ingredients like ginkgo biloba and choline are two examples of ingredients you need as you’re older, rather than younger. If ever in doubt, ask your doctor about what supplements are best for you. Ginkgo Concentrate could be one of them. 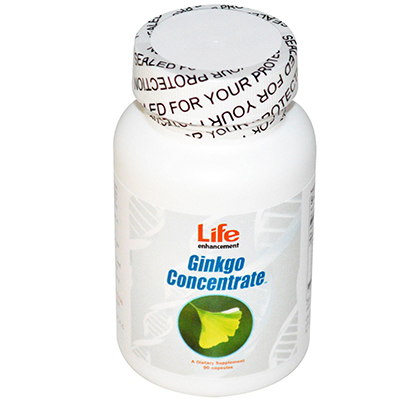 clear
Q:
What are the Ginkgo Concentrate ingredients?
A:

Ginkgo is possibly effective in combating anxiety, dementia, vision problems, dizziness, and more. It's often used by itself, and in supplement formulas, for general mental enhancement. People report results that align with what ginkgo is supposed to do – enhance cognitive abilities and/or alleviate age related mental decline. Reviews are almost always positive and it's rare to see someone suffering from side effects. It's a healthy herb overall, and concentrated extracts work well in older adults to stave off cognitive decline. For general health, ginkgo is an option. If you're above the age of 50, you may need something more potent – but that depends on your body chemistry.