Eleuthero Root Review – Is it Effective?

Eleuthero Root is advertised as an alcohol-free liquid dietary supplement designed to promote vitality. The formula manufactured by Nature’s Answer is claimed to be obtained from wildcrafted herbs of Eleuthero or Siberian Ginseng, a plant used for thousands of years. The product is Kosher and claimed to be holistically balanced to include the active constituents in the same synergistic ratios as are found in the plants themselves. The formula is hence ensured maximum potency.

Nature’s Answer was founded in 1972 as a pioneer of alcohol-free extracts. Today, the company has extended its product range to include a variety of alcohol free and alcohol-based herbal formulations (encapsulated formula, extracts, tinctures, homeopathic products, creams, etc) for a variety of health conditions and illnesses. The company operates under the regulations set forth by the FDA and comprised in the Current Good Manufacturing Processes.

Pregnant and nursing women are advised against the use of Eleuthero Root.

1) What is Eleuthero Root?

Eleuthero Root is a liquid extract from the Eleuthero herb, or Siberian Ginseng as it is commonly known.Eleuthero is native to Russia, China, Japan and Korea, where it is used for many centuries. The plant gained popularity in the Western medicine as well, where it is known for its adaptogen, mildly anti-inflammatory, antioxidant, immune system tonic and nervine properties. Many of its medicinal uses are not endorsed by actual scientific evidence, while most research has been conducted in Russia.

There is however evidence that the herb efficiently assists with immune system enhancement, physical and mental stress symptoms, exhaustion and other conditions characterized by low energy levels. Eleuthero may be a potential treatment for chronic fatigue syndrome, and adrenal fatigue caused by excessive stress. In addition to its adaptogenic effects, the plant may also assist with alleviating symptoms of certain anxiety disorders (panic attacks, social anxiety, obsessive compulsive disorder), and depression. Eleuthero has mild side effects, including insomnia, confusion or vomiting.

Eleuthero root is also found in nootropics like Brain Pep.

4) What You Need to Know Before Taking Eleuthero Root

5) How Much Does Eleuthero Root Cost?

The formula is available in bottles of one and two ounces. A two-ounce bottle should last approximately one month if the maximum dosage is used (2ml). The price for a two-ounce bottle is approximate $26, no discounts applied. However, you may find the product available as part of certain promotions which further decrease the unit price. The manufacturing company’s official website offers users the possibility to locate stores by using ZIP codes or city names. All Nature’s Answer products are liable to a 30-day money back guarantee, which exclusively covers the products purchased from the manufacturer (by phone or mail order).

Eleuthero or Siberian Ginseng is a popular herbal solution against occasional stress, fatigue, lack of energy and immune system weakness. Although its therapeutic effects are supported by clinical scientific evidence (especially conducted in Russia), further research is still required for most of its claimed benefits. Eleuthero Root was evaluated by consumers through several reviews and considered to be effective and work as advertised. There are however several safety concerns which should not be ignored. Siberian’s Ginseng may harm patients with certain underlying conditions. This is why Eleuthero should not be used without prior consulting a healthcare professional. 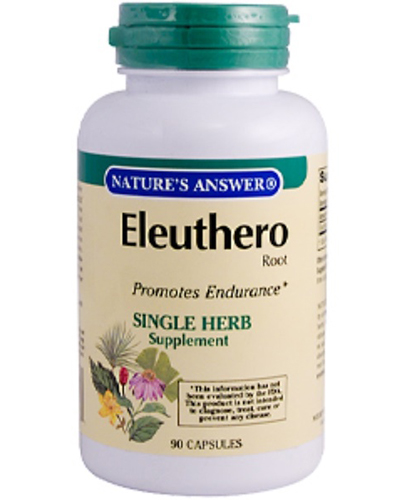 clear
Q:
What are the core ingredients in Eleuthero Root?
A:

Q:
Eleuthero Root is all about what?
A:

Q:
Does Eleuthero Root work?
A:

Nature’s Answer Eleuthero Root is one of the many herbal extracts on the market which features Eleuthero as an ingredient. The product is advertised to promote vitality, and combat stress, although no clear scientific evidence is brought to support the formula’s Effectiveness. There are several consumer testimonials available online which confirm the formula works to promote energy and vitality. Research on Eleuthero so far is rather limited, and many clinical trials have provided mixed or inconclusive results. There are particular safety concerns regarding Siberian Ginseng use. Hence we strongly recommend that you consult a healthcare professional before starting using this formula.

This really helps me with my insomnia, I can get roughly 6 hours of sleep without interruption when using Eleuthero Root. Hope the effect doesn’t fade away.