Executive Focus Review – Is it Effective?

Executive Focus is marketed as a comprehensive formula designed to support memory and concentration and to provide stress relief. According to the manufacturer, the formula works by supplying the brain with the necessary nutrients and the adequate amount of oxygen to work properly.

Swisse, the manufacturer of Executive Focus is a leading Australian health and wellness brand. The company was set up in the 1960’s and currently markets more than 100 vitamin and health supplement products on the Australian market. In 2012, the brand goes global, with leading actress Nicole Kidman as brand ambassador.

The formula is suited for adults who wish to improve their mental stamina, boost their energy levels and perform at their best when challenged with mental and physical stress. The formula is also suitable for vegetarians. People taking anticoagulants (such as Warfarin) or blood thinning medications are not advised to use the formula.

The manufacturer mentions no gluten, lactose, egg, yeast, salt, preservatives, artificial colors and flavors have been added to the formula.

1) What is Executive Focus?

Executive Focus is a combination of vitamins and herbal extracts designed to assist with memory, concentration, focus and to increase stamina.

Ginkgo Biloba has been traditionally used for thousands of years for its blood circulation enhancing properties. Modern medicine has later established that there are roughly 40 components in the Ginkgo tree leaf, two of which have medicinal benefits: the Flavonoids and the Terpenoids. The two are known to possess powerful anti-oxidant properties; therefore, they reduce and may even prevent free radical damage. Terpenoids also help improve blood flow by dilating blood vessels. Several tests conducted in laboratories, on humans and animals indicate Ginkgo may be used against Alzheimer’s and dementia may improve memory, social behavior and may help fewer feelings of depression.

B Vitamins have been shown to improve mood by creating a protective shield for the neurons in the brain. They also assist with the breaking down process of homocysteine, a substance which is harmful to nerve cells and has been found in high levels in heart disease and stroke patients. B Vitamins also help with the production of red blood cells, essential to oxygen transportation.

A similar formula for concentration that also makes use of Ginkgo Biloba is AlphaZXT Brain Booster.

3) What Does Executive Focus Do?

Promoted as a combination of herbal extracts and vitamins, Executive Focus is meant to assist memory, focus, and concentration as well as increase the stamina. One of these ingredients is Ginkgo Biloba, a plant which has been traditionally used for its blood circulation improvement qualities.

Modern medicine has established that there are at least forty components in the Ginkgo leaf, two of them possessing high antioxidant properties. These are terpenoids and flavonoids, and they help by reducing or even preventing damage done by free radicals in the human body. Also, terpenoids enhance blood flow by dilating the blood vessels.

Some laboratory tests on humans and animals suggest that Ginkgo may prove reliable in the treatment of dementia or Alzheimer and may even have a strong positive effect on social behavior and feelings of depression. On the other hand, some unwanted effects may be triggered by Ginkgo Biloba treatment, such as: diarrhea, vomiting, and nausea.

Other essential components of Executive Focus formula are vitamins from the B group which has been shown to trigger an improvement in mood by forming a protective shield for the brain. They can also assist in the process of homocysteine breakdown. Homocysteine is a substance which is harmful to nerve cells and was found at high levels in stroke patients and heart diseases. These vitamins can also prove effective in the production of red blood cells which are essential for oxygen transportation.

Unfortunately, there are no available customer testimonials related to the consumption of Executive Focus. Thus its efficacy has yet to be proven.

5) Precautions of Executive Focus Use

6) How Much Does Executive Focus Cost?

Executive Focus is a product manufactured by bottles that contain 50 capsules and is sold at moderate prices on both manufacturer website and other retailers. If purchased in larger amounts, there are discounts and promotions offered by some retailers.

There are no consumer testimonials available online. The recommended dosage is 1-2 tablets daily, during or immediately after a meal or as directed by a health care professional. No side effects are mentioned; however, the product comes with some precautions.

The formula contains scientifically validated ingredients, both herbal ingredients such as Bacopa Monnieri, Ginkgo Biloba and a number of essential vitamins. Swisse, the manufacturer, is one of Australia’s leading companies in the field of nutritional supplementation.

Both Ginkgo and Bacopa have been tested on humans and proven cognitive functions benefits; however, they have been associated to some side effects which should be considered, even if mild and rare.

The manufacturer mentions no side effect for the combination of ingredients proposed by Executive Focus. In the absence of any consumer testimonials to validate or invalidate its effectiveness and to list potential side effects, we recommend caution and advise you to get a specialized opinion prior to use. 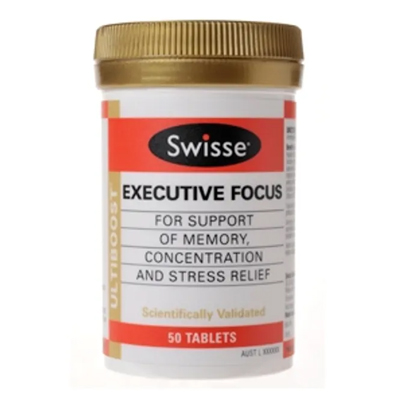 Executive Focus includes the following ingredients: Bacopa Monnieri, Ginkgo Biloba, Vitamin B1, Nicotinamide, Vitamin B2, Vitamin B5, Vitamin B12, and Vitamin B6.

Q:
Executive Focus is all about what?
A:

Executive Focus is advertised to be a supplement that aims to provide energy for both mental and physical tasks. The company that manufactures this product is called Swisse, Melbourne, Australia based business. Executive Focus is a formula that uses Brahmi and Ginkgo Biloba as primary ingredients, plus a range of vitamins, in order to provide support for the circulatory system, thus aiming to sustain energy levels and aid with memory and concentration.

Q:
Does Executive Focus work?
A:

All in all, Executive Focus represents a formula that contains both herbal ingredients as well as vitamins. These components have been scientifically validated and are used in most of the natural supplements on the market. The product is intended exclusively for the adult use, and the recommended dosage is two capsules per day, with water. Even though there are no side effects of this particular combination mentioned by the manufacturers, in the absence of client testimonials, its efficacy has yet to be validated.

I have been using this formula for the past four months, and I am full of energy.